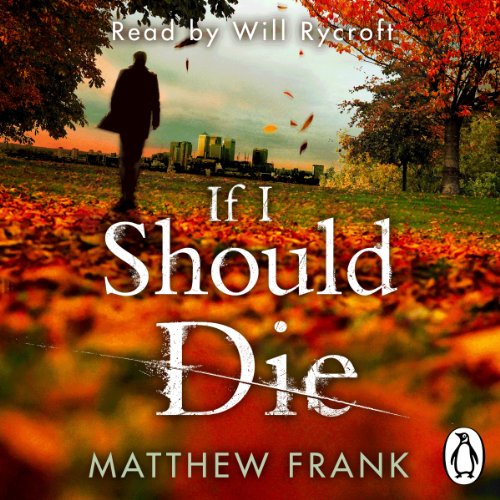 If I Should Die

The unabridged, downloadable audiobook edition of If I Should Die, the astounding debut from British author Matthew Frank. Read by the actor Will Rycroft.

It begins with vicious, apparently motiveless attacks on down and outs in South London. But when one of the homeless victims dies from his wounds, it's murder.... For the Met investigation team's newest member, Joseph Stark, death is already all too familiar. Injured in an attack that killed his fellow soldiers and tortured by nightmares since he returned, Afghan veteran Stark has enough on his hands just trying to recover without enduring the scrutiny and sideways glances of his new colleagues. The drink and painkillers he's leaning on to keep going aren't helping. And there's only so long he can ignore the efforts of the Ministry of Defence to speak to him.

When one of the victims of the attacks fights back it's soon clear that there's much more at stake than gangs preying randomly on society's weakest members. But as Stark hunts down the truth - and the rotten heart of the crimes - his own strength is fading. It seems that the ex-soldier's determination to see justice done may not, this time, be enough to carry him through.

If I Should Die is the first title in a new crime series, and outstanding characterization, pitch-perfect dialogue, and precision plotting mark out Matthew Frank as a debut writer to watch. With the introduction of series character and ex-soldier police detective Joseph Stark, fans of Ian Rankin's Rebus novels will be hooked from the word go.

Ce que les auditeurs disent de If I Should Die

Would you consider the audio edition of If I Should Die to be better than the print version?

Yes. Will Rycroft is a fabulous narrator

Joe of course. What an amazing young man with a truly heartfelt story to tell

Which character – as performed by Will Rycroft – was your favorite?

They were all good - it was so easy to distinguish each character in the narrative. Will's performance was so good I stopped doing anything and just listened.

The presentation at Buckingham Palace and stabbing the tyres.

More please. More of Will, more of Joe and more of the great detective team.
I was particularly impressed by Joe's (Matthew Frank's?) views on war and the obvious background knowledge and/or research that went into the book