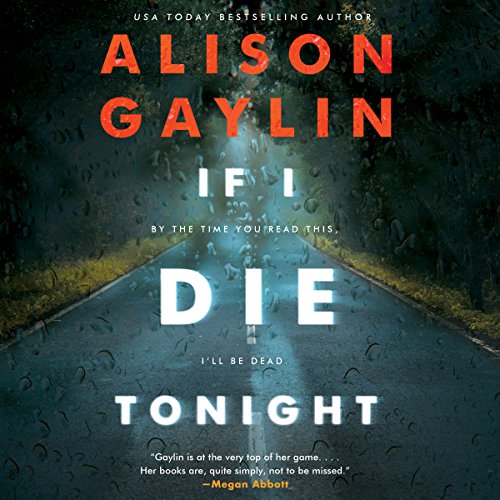 If I Die Tonight

Reminiscent of the best sellers of Laura Lippman and Harlan Coben - with a dose of Big Little Lies or Stranger Things - an absorbing, addictive tale of psychological suspense from the author of the highly acclaimed and Edgar Award-nominated What Remains of Me and the USA Today best-selling and Shamus Award-winning Brenna Spector series, in which a seemingly open-and-shut police case with a clear-cut hero and villain turns out to be anything but simple.

Late one night in the quiet Hudson Valley town of Havenkill, a distraught woman stumbles into the police station - and lives are changed forever.

Aimee En, once a darling of the '80s pop music scene, claims that a teenage boy stole her car, then ran over another young man who'd rushed to help.

As Liam Miller's life hangs in the balance, the events of that fateful night begin to come into focus. But is everything as it seems?

The case quickly consumes social media, transforming Liam, a local high-school football star, into a folk hero, and the suspect, a high school outcast named Wade Reed, into a depraved would-be killer. But is Wade really guilty? And if he isn't, why won't he talk?

Told from a kaleidoscope of viewpoints - Wade's mother Jackie, his younger brother Connor, Aimee En, and Pearl Maze, a young police officer with a tragic past, If I Die Tonight is a story of family ties and dark secrets - and the lengths we'll go to protect ourselves.

slow at the start

started off very slow but, I almost returned it. once the story gets to the crime and investigation it's much more interesting.
narrator voice is so slow and awful. especially in the beginning when the story is slow. dreadful voice, so negative, monotone, was very hard to tolerate.

I thought it would be suspensful... it was not.

slow burn about teenagers. kept waiting for it to pick
up and get to the heart of it

This was my first book by this author and I can’t wait to read another one! This book held my interest from beginning to end. The very first few sentences of a young man getting on his mother’s Facebook page and announcing his impending suicide grabs the reader and you just have to keep listening to find out more and more of the complicated complex story. Narrator was excellent as well! Highly recommend!

Yes, I would recommend this book. The story was captivating and a little sad. As a woman who did not grow up in the digital age, I feel horrible for kids these days, whose every mistake is splashed all over a screen for their peers, family and strangers to see. It's an age I am glad I didn't grow up in. Alison Gaylin did an excellent job capturing what is really happening in our Western Culture. She did it real and she did it gritty. It almost sounds like a true story, because you know, after listening to this book, that all these nasty injustices could happen, and probably have.

Pearl was my favorite character. Don't know why, she was just likeable, compared to all the other characters, who were actually difficult to like, except the mom (Jackie) and Paul.(a minor character)

Look What They've Done to Our Kids.

When I was reading, I couldn’t get enough. Even when I wasn’t reading, I was still thinking about the characters and the twists . Excellent job! The author writes with a clarity that makes the book easily digestible and builds in the perfect amount of suspense to keep you turning the page.