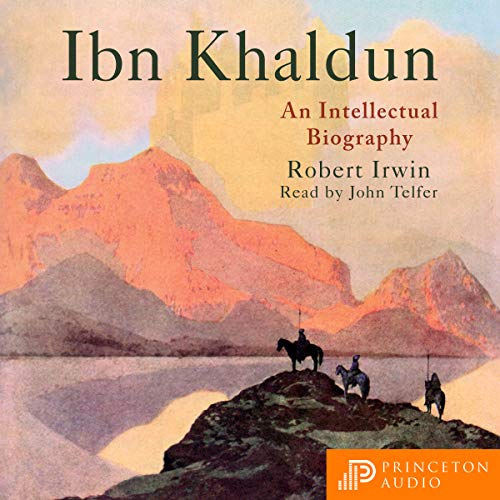 Ibn Khaldun (1332-1406) is generally regarded as the greatest intellectual ever to have appeared in the Arab world - a genius who ranks as one of the world's great minds. Yet the author of the Muqaddima, the most important study of history ever produced in the Islamic world, is not as well known as he should be, and his ideas are widely misunderstood. In this groundbreaking intellectual biography, Robert Irwin provides an engaging and authoritative account of Ibn Khaldun's extraordinary life, times, writings, and ideas.

Irwin tells how Ibn Khaldun, who lived in a world decimated by the Black Death, held a long series of posts in the tumultuous Islamic courts of North Africa and Muslim Spain, becoming a major political player as well as a teacher and writer. Closely examining the Muqaddima, a startlingly original analysis of the laws of history, and drawing on many other contemporary sources, Irwin describes how Ibn Khaldun's life and thought fit into historical and intellectual context, including medieval Islamic theology, philosophy, politics, literature, economics, law, and tribal life. Because Ibn Khaldun's ideas often seem to anticipate by centuries developments in many fields, he has often been depicted as more of a modern man than a medieval one, and Irwin's account of such misreadings provides new insights about the history of Orientalism.

In contrast, Irwin presents an Ibn Khaldun who was a creature of his time - a devout Sufi mystic who was obsessed with the occult and futurology and who lived in an often-strange world quite different from our own.

"Irwin wears his immense erudition lightly and gives an often very funny account of how orientalists, historians, and modern Arab nationalist have interpreted Ibn Khaldun’s most famous work.... Irwin offers his readers a superb work of intellectual recovery, one which presents Ibn Khaldun as a creature of his time.... He has resurrected for us the medieval Muslim mind." (Francis Ghilès, The Spectator)

"In Robert Irwin, Ibn Khaldun has finally found a biographer and interpreter almost as versatile and learned as he was himself." (Eric Ormsby, Wall Street Journal)

This book would have received a higher rating if the author had spent more time learning Arabic, or perhaps reviewed translation before producing his own. In Chapter one he quotes the Qur'an 17:16 in an entirely lopsided manner, confusing what fafasaku means in the context. Not a single Qur'anic translation, Muslim or otherwise had confused it in the way he did, where as his version says that God has ordered the people to be bad, the actual verse says they did ill DESPITE receiving commandments from God. How could he has so thoroughly corrupted the verse is embarrassing and says a lot about the author.

Also, he criticizes some of Ibn Khaldun's theories without taking into context what was known at the time. Such as his idea heat is produced as a result of reflections of light, not of distance to the sun. A good idea why he might have thought that is how mountains are snow capped, same with alexander's submarine, he wouldve had no idea that a person could suffocate from being trapped in a room with no air from outside, his idea that heat would be the primary cause of mortality is a result of direct observation that the air you exhale is hotter than that which you inhale.

I am a fan of Irwin’s work, an orientalist of remarkable erudition, and I was truly looking forward to this new work. Two hours into the audio, and I’m sad to say it is way below sub-par and I must let it go. The narrator mangles simple common Arabic words beyond recognition; his pronunciation of commonplace Arabic surnames as if they were French (specifically using the French “r” for what reason I have no idea) is inexplicable and frankly jarring; sometimes his reading of foreign/Arabic or Persian terms is so annoyingly halting it sounds as if entire phrases and passages have been recorded over. I will try to give the print book a shot, but this audio is definitely not a good sign. Irwin is a thoughtful meticulous scholar; his writing is illuminating, compelling, witty; this audio is godawful and renders Ibn Khaldun unapproachable. I can’t believe Princeton would approve the production of such a shoddy rendition of an eminent scholar’s work. DO NOT BUY!

The author sets out to bulldoze the perhaps overblown and overrated Ibn Khaldun, yet concerns himself almost exclusively with trifles. Rather than an intellectual biography of Ibn Khaldun, we see something more akin to an exercise of the author's intllectual vanity. A great chunk of the book is concerned with Ibn Khaldun's pre-modern and highly idiosyncratic ideas, from his ignorance of meteorological phenomena, to his almost provincial turtling into religious handwaving to dismiss sophists and philosophers.

In a field crammed with praise for the man, the author somehow overstresses the goofier aspects of Ibn Khaldun's thought. A small and derisive tone pervades throughout. Ironically, for so much commentary on bad translations by others, the author deploys his own idiosyncratic (wrong) translation of Quran 17:16, a translation that states that god /commands/ the wealthy and powerful of the cities he wishes to destroy to do evil, when in fact no other version could I find renders the passage this way. Instead, every translation is to the effect that the elite are commanded to do /good/, yet continue to transgress. A bit embarrassing, really.

Rather than a secondary treatment of the man, his works and his times, I feel like the book is more a hit job, not that Ibn Khaldun did not deserve a bit of a hit, but the result is dissapointing in that I feel I've learned very little—the worst sin a book can commit.