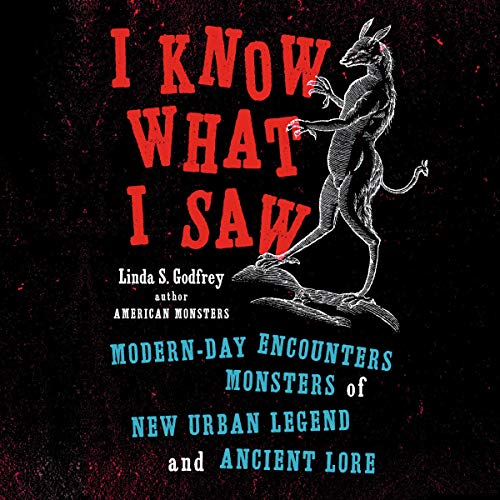 I Know What I Saw

I Know What I Saw

Which came first - the monster or the myth? Journalist Linda Godfrey investigates present-day encounters with mysterious creatures of old.

The monsters of ancient mythology, folklore, and more contemporary urban legend have long captured the popular imagination. While most people in America today relegate monsters to just that - our imaginations - we continue to be fascinated by the unknown. Linda Godfrey is one of the country's leading authorities on modern-day monsters and has interviewed countless eyewitnesses to strange phenomena. Monsters evolve, taking on both new and familiar forms over time and across cultures. In this well-researched book, Godfrey explores uncanny encounters with werewolves, goatmen, Bigfoot, and more.

In more than 25 years spent "chasing" monsters, Godfrey has found that it often remains unclear whether the sightings are simply mistaken animals, hoaxes, or coincidence. When all the speculation is said and done, one question remains for fans and researchers: Are the creatures "real", or are they entirely "other-world"? Godfrey suspects that it isn't an either/or question - our reality operates on a scale from dense matter to realms the human eye cannot see.

As Godfrey investigates unexplained phenomena, her search for answers will fascinate casual observers and enthusiasts alike.

"A striking collection of cryptozoological creatures and fantastical folklore from North America.... This quirky, deeply researched guide will be a great resource for monster hunters." (Publishers Weekly)

“The shadowy realm of monsters and weird human-animal hybrids is not limited to the ancient, dusty past, but exists right alongside us today, revealing itself in terrifying ways. There is no better navigator through this bizarre and scary landscape than Linda S. Godfrey, one of the most outstanding researchers in the cryptid field. This book will both thrill and chill you." (Rosemary Ellen Guiley, author of The Encyclopedia of Angels)

"The most frightening monsters you can imagine may be lurking in your own backyard. In this unsettling collection of testimonials and anecdotes, veteran monster-hunter Linda Godfrey shows how ancient myths and indigenous legends inform modern sightings of walking wolves, dire dogs, deer people, and other strange beasts in rural America. You will think twice before driving down a country road at night after reading this book." (Scott G. Bruce, editor of The Penguin Book of the Undead and Professor of History at Fordham University)

A real let down

I had pretty high hopes for this based on all the good reviews it got. One comment that stuck in my head was "she presents the facts and let's you decide". That is not what is in this book. The author does a good job of repeating tales told to her in a respectful way free of judgment, but it's what she does AFTER that that's problamatic.

She throws out endless streams of assumptions that unproven and almost certainly impossible things as facts and then builds from their. She strings out good strings of "if this is true then this is true and this is likely", but the issue is a lot of the things she is staying as true or likely aren't. Its a string of facts that if even one fact is untrue it collapses and often most of their "facts" are just unproven nonsense.

A good example was the people she said might be head transplant patients, three teenagers with reported faces of old men. She talks about a man who has claimed to be preparing to do a head transplant as proof that head transplants are possible. First, he has not even tried the surgery and is a well known con artist. That aside, the procedure has not even been tried, much less succeeded yet. But she uses the assumption that it's possible as a jumping off point then presents as self-evident fact that any old person getting a head transplant would of course put it on as young a body as possible. She then throws out "fact" after fact that "must" be true, All of them based on previous "facts" and all of which would be untrue if even one of the previous "facts" weren't true.

This story was very repetitive - looping back to wolf people. There are so many great urban myths to
touch on, but many were not discussed or they were skimmed over.
The voice narration was so hard to listen to. The narrator kept switching from a soft feminine voice
to a deeper robot like voice. It was grading and a bizarre pick for the voice. I’m just disappointed and had hoped this would be really elaborative and fascinating.

Linda Godfrey has compiled great stories from Americans who’ve seen things they don’t understand. Her knowledge and presentation of facts dispassionately leaves room for interpretation yet entertains you while giving you the creeps.
Bill Richardson

Good listen while you work

I love this type of book, it's about cryptids, but doesn't force the author's belief of them on you. You are given the information, and allowed to decide for yourself. There were a few spots where it seemed to ramble, only to pull it back to together and leave you with an A-HA! moment.

A great book I recommend everyone to read it. It has very interesting stories for everyone to enjoy.

unfortunately the author does not expand on her research and only creates a catalog of myths and legends. anyone who has had an interest in this area knows the stories and myths that she's talking about and does not require the catalog. I was hoping that she would expand into her research regarding the background and reality of some or any of these Legends.

To much about Dogmen

It was a good book although she did talk about dogmen and diredogs way to much. great narrator but just talks about dogs to much. very different from what she talks about in the first few chapters and the types of things she brings up.

These are the stories that populate the tabloids as they would be written if the tabloids hewed to the precepts of journalistic integrity.