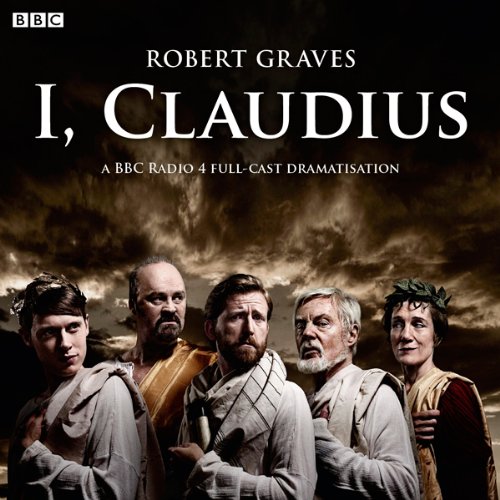 A full-cast dramatisation of Robert Graves' brilliant account of the madness and debauchery of ancient Rome, starring Tom Goodman Hill as Claudius and Derek Jacobi as Augustus. The wickedly entertaining inside story of the lives and deaths of the Imperial dynasty from Augustus to Caligula is told by their obscure relation, Claudius. In public, Claudius is a stammering, drooling weakling, whose reputation as an idiot keeps him safe from office and assassination. But in private, he's as sharp as they come, and keeps a secret history of everything he discovers. Until one day, as one of the few of his family left alive, he's acclaimed Emperor against his will. Can he save Rome from the corruption he's grown to detest?

Featuring Derek Jacobi (who won a BAFTA for his performance as Claudius in the acclaimed 1977 BBC television production) as Augustus, and with an all-star cast, this gripping dramatisation will enthral anyone who loves the decadence of Ancient Rome.

I, Claudius lover impressed with abridging

As a great fan of the books and the BBC adaptation for television, it was with some trepidation that I allocated last month's credit to an 'abridged' title. Lured by the presence of Derek Jacobi, a man marred only by his crackpot views on the authorship of Shakespeare's body of work, I was once again transported to Robert Graves' version of first century Rome. The voice-acting was superb, and I was only occasionally saddened that this or that part was missing. Mostly, I was having far too good a time to notice. Thanks very much for having this wonderful performance in your catalogue.

What made the experience of listening to I, Claudius (Dramatised) the most enjoyable?

Unbeatable recording. Every nuance of the language and affliction is audible and extremely well executed. A completely immersing ride.

There are times, when I didn't want the traffic to clear.

Audio Theater at its BEST

What did you love best about I, Claudius (Dramatised)?

About to take my first trip to Rome, I chose this to get myself into the mood. It was a wonderful experience listening to these actors perform. I've never seen the PBS series, but I could picture it just listening to this performance of I, Claudius.

Have you listened to any of Derek Jacobi and Tom Goodman Hill ’s other performances before? How does this one compare?

I'm a big fan of Derek Jacobi and I wish he had a larger part in this.

I listened to this book over several weeks. It's an easy book for car listening.

As a fan of both the book and the classic BBC TV miniseries starring Derek Jacobi, I couldn't resist trying out this audio drama version of I, Claudius--especially as it stars some of the great British theater actors, including Jacobi as Augustus, and it recently won an Audie Award for full cast recordings.

What a great piece of audio theater it was! I was so drawn into the story, the characters, and the life of the early Roman Empire that I literally couldn't stop listening. (Since I normally listen as I walk, this was also quite good for my figure!) You find you don't miss the visual element at all--each character is clearly separate and your imagination paints the scene. Great story, great acting--who could ask for more?

This brilliant 6 hour BBC production of Roman history drama "I, Claudius" is the BEST audio drama I've ever heard in my life, period! <3 <3 I loved the 1976 BBC TV series of "I, Claudius," one of the best miniseries ever made. This riveting audio drama is the best made since the TV series. Rich and poetic language, acting, music, sound effects etc. It was PERFECT and thoroughly enthralling! Full of murder, betrayal, sex, violence, politics, deception, and drama. The audio drama was about as brilliant as the TV series. I actually wanted more traffic and a longer commute to listen to it. Surprisingly, Derek Jacobi plays Augustus, not Claudius. Tom Goodman-Hill brilliantly copied Jacobi's Claudius voice so well I forgot it wasn't Jacobi! Tom deserved an award for his mesmerizing performance. If you think Trump is extreme in corruption and depravity, no one beat the Roman emperors and their families. Next I start the audiobook for "I, Claudius" the novel, by Robert Graves. Thank you soooo much for making this, BBC! You give joy to generations!

Classic story brought to life. A throwback to the old PBS series that appeared on Masterpiece Theater.

Why the credits after each chapter?

An intriguing story which is well performed. Unfortunately the credits after each chapter interrupt the mood and flow of the story. It makes one think that the performers think their acting is more important that the story itself. Would you enjoy watching a movie if after each scene the credits were to roll grandly announcing each of the actor’s roles?

Performance was wonderful and the story is compelling! This book is treasure and the performance holds your interest.

Seriously enjoyable performance of this classic. I would listen to it when I had any opportunity - in the car or waiting for a shave at the local barber. Completed in three days. Highly recommended.

I missed my subway stop more than once because of this one, but if it took longer to walk home, I wasn't the least bit upset. I thought about this book while at work and was completely pre-occupied. I'd seen the TV series videos, so I knew what to expect but I think I was more engrossed with the audiobook than the TV show. It's so hard to explain. Derek Jacobi stands out, really bringing to life a vulnerable but deeply intelligent Claudius. Words fail.