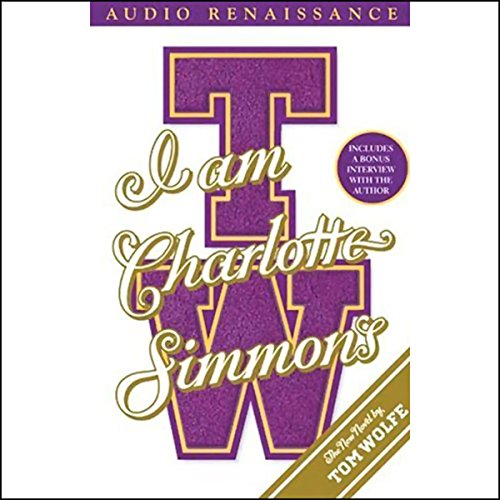 I Am Charlotte Simmons

I Am Charlotte Simmons

Dupont University: the Olympian halls of learning housing the cream of America's youth, the roseate Gothic spires and manicured lawns suffused with tradition....Or so it appears to beautiful, brilliant Charlotte Simmons, a sheltered freshman from North Carolina, who has come here on full scholarship. But Charlotte soon learns, to her mounting dismay, that for the upper-crust coeds of Dupont, sex, Cool, and kegs trump academic achievement every time.

As Charlotte encounters Dupont's privileged elite, her roommate, Beverly, a fleshy, Groton-educated Brahmin in lusty pursuit of lacrosse players; Jojo Johanssen, the only white starting player on Dupont's god-like basketball team, whose position is threatened by a hotshot black freshman from the projects; the Young Turn of Saint Ray fraternity, Hoyt Thorpe, whose heady sense of entitlement and social domination is clinched by his accidental brawl with a bodyguard for the governor of California; and Adam Geller, one of the Millennial Mutants who run the university's "independent" newspaper and who consider themselves the last bastion of intellectual endeavor on the sex-crazed, jock-obsessed campus, she gains a new, revelatory sense of her own power, that of her difference and of her very innocence, but little does she realize that she will act as a catalyst in all of their lives.

With his signature eye for detail, Tom Wolfe draws on extensive observation of campuses across the country to immortalize college life in the '00s. I Am Charlotte Simmons is the much-anticipated triumph of America's master chronicler.

Decadence through the eyes of a ?good girl?

If one can bear the vulgarity and decadence, one will be treated to superb story telling and a fine display of literary genius. Wolfe combines the bland, vulgar statements of the characters with his own witty and enlightening additions. His commentary makes the foolish characters somewhat coherent to the non-college student and provides some insight into the reasons for this dismal state of affairs.

Most of all, however, Wolfe sticks to description of characters and events and draws the audience in with the most colorful word manipulation. The audience is compelled to root for the good girl even as her path takes her further into trouble. Indeed, the innocent protagonist does not figure out a way to avoid being contaminated by the dirty culture. But even through this painful fall, the audience receives a great tool in figuring out what goes on at college and perhaps that is all one needs to invent their own way of dealing with the challenges such an environment presents.

Charlotte Is Worth Getting To Know

Just finished Tom Wolfe's latest classic, I Am Charlotte Simmons two weeks ago. Again I listened to this one on an MP3 from Audible. Incredibly funny and relevant, perhaps too much so.

The story is about the beautiful, genius and naive? student from Sparta, NC, (Charlotte Simmons), experiences in her first year at an Ivy League caliber school in Pa. The novel exposes the absurdity of today's amoral campus life and the lower standards of the higher echelon of academia.

At the end of the audible version of the book, Wolfe is interviewed about his research. This is where it gets personal. He spent a lot of time interviewing students at Stanford, a little at several Ivy League campuses and over a month at UNC-CH! My 19 year old daughter is a frosh at Carolina.

To be fair, Carolina has a prof who is country's leading authority on slang. Still, the 74 year old explored the sexual and substance excesses at Carolina and found an alarming ambivalence in its students. For instance, a large part of the book explores the foolishness of co-ed living. Lander lives in a Co-ed dorm where every other suite is inhabited by guys.

Think about it. Where in adult life do men and women who are complete strangers live together in such intimate and lecherous surroundings? Such a lifestyle does nothing to prepare students for life. Yet it is the universally accepted form of student housing across the country.

Nevertheless, it was an incredible ride through a wonderful girl's freshman year.

This is the best production of an audio book I have heard. Excellent audio quality, fantastic characterization of the protagonist by the reader, and excellent story all add up to make this a great audio book.

The best audio book ever

Ok, this is it, the Mona Lisa, the Mount Everest, the Bill Gates of audiobooks. I've got around 2.3 million audiobooks in my library and this is the best one by far. The writing is sublime -- hilarious beyond belief and completely absorbing.

And the narration? Perfect from word one. I simply can't reccomend this book more strongly.

If Oscars were given for acting out books, Baker would go home with the golden statue -- he's great. Just great. With so many different people populating this book -- Southern homefolk, Boston elite, Jewish professors, black athletes, little-guy reporters -- it was nothing short of fascinating to realize how much you learned about each character from just listening to them speak -- through Baker, of course. Very well done.

That said, this was one of the few books I've ever encountered that shoulda been shorter, by about a third. We are treated to three separate episodes of play-by-play basketball, which maybe some sports nuts loved, but got intensly boring after just a few minutes. And some of the love -- make that sex -- scenes were disgusting and way overdone, even though one has to suppose that writing these sex and sport scenes must have been great fun for Wolfe. If I'd been reading the book, I would have skipped ahead, but with an audio book, you have no way of knowing how long it's going to continue.

None of this should deter you from experiencing this book, in one format or another. "Charlotte" is a very very good book, and one that surely will cause some heartburn among the denizens of the hallowed halls of ivy. It's surely one of those situations in which a book of fiction will bring about more reform, long run, than a dry, academic critique ever could.

Read it, or listen to it, but don't miss "I Am Charlotte Simmons".

I would have liked to give this 3+ stars; it doesn't quite meet my four-star criteria, but three stars would be an injustice. It's a well-written update on college life, as a small-town girl collides with a major university. This is not Tom Wolfe at his best or funniest, but it is thought-provoking and fun. If there is anyone left who is bothered by bad language, this will bother them. The reading is very well done.

What does Dylan Baker bring to the story that you wouldn’t experience if you just read the book?

The narrator, Dylan Baker, uses a bunch of voices and accents for both the male and female characters. He's a very talented narrator, and he reads the story as if he's talking to you, or narrating your--or someone else's--thoughts. Which is to say that he's very real, down-to-earth, and has no annoying aristocratic or British accent as so many audiobooks narrators seem to have. 5-star narration. He's an excellent reader.

As you can tell, I definitely do not recommend the abridged version of this book. This narrator reads at a good rate-of-speed and is, above all, interesting to listen to. The book is good anyway, but a bad narrator can make even the best book a chore, and a good narrator can make a good book better.

great book and narrator was fabulous. would not have been as good if i had read it.

For this we pay tuition?

Excellent and funny and sad. This depicts college life and upscale universities. Scary in parts -- especially with my sons in college. Scarier if I had daughters. A great read that reflects college life - and growth.

looking back and forward

Reading this book helps a little, I think, in understanding the peer pressures my daughter is facing in college. My husband benefited somewhat from the hours I spent listening to the book, in that the long passages concerning sex are pretty effective. The reader does an excellent job with all the male voices. I would've enjoyed hearing another voice, however, for most of the females. The reader's vocal range is limited to unpleasant female voices, in my opinion.
In contrast to the fictional difficulties Charlotte Simmons faces, I hope colleges are doing a better job of providing moral support to incoming students, especially those with very limited financial resources.