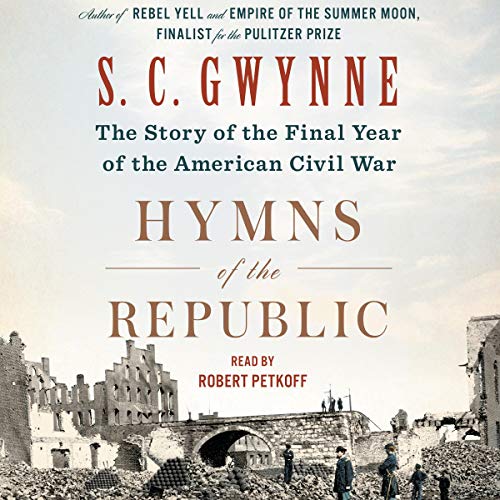 Hymns of the Republic

From the New York Times best-selling, celebrated, and award-winning author of Empire of the Summer Moon and Rebel Yell comes the spellbinding, epic account of the dramatic conclusion of the Civil War.

The fourth and final year of the Civil War offers one of that era’s most compelling narratives, defining the nation and one of history’s great turning points. Now, S.C. Gwynne’s Hymns of the Republic addresses the time Ulysses S. Grant arrives to take command of all Union armies in March 1864 to the surrender of Robert E. Lee at Appomattox a year later. He breathes new life into the epic battle between Lee and Grant; the advent of 180,000 black soldiers in the Union army; William Tecumseh Sherman’s March to the Sea; the rise of Clara Barton; the election of 1864 (which Lincoln nearly lost); the wild and violent guerrilla war in Missouri; and the dramatic final events of the war, including the surrender at Appomattox and the murder of Abraham Lincoln.

Hymns of the Republic offers angles and insights on the war that will surprise many listeners. Robert E. Lee, known as a great general and southern hero, is presented here as a man dealing with frustration, failure, and loss. Ulysses S. Grant is known for his prowess as a field commander, but in the final year of the war he largely fails at that. His most amazing accomplishments actually began the moment he stopped fighting. William Tecumseh Sherman, Gwynne argues, was a lousy general, but probably the single most brilliant man in the war. We also meet a different Clara Barton, one of the greatest and most compelling characters, who redefined the idea of medical care in wartime. And proper attention is paid to the role played by large numbers of black union soldiers - most of them former slaves. They changed the war and forced the South to come up with a plan to use its own black soldiers.

Popular history at its best, with Hymns of the Republic Gwynne reveals the creation that arose from the destruction in this thrilling listen.

I would caution anyone before reading this work to look to other books on the period first. I loved this author’s previous work entitled “Empire of the summer moon“ but this work is another matter altogether. The author spends a great deal of time lambasting nearly everyone he comes across and in very personal terms. All of the usual blunders are here but he also slashes away at battles and events and makes judgments about how they were fought in ways that many professional historians could argue with successfully. I found particularly troubling his arm chair psychological insights into the reasons behind actions taken by individuals while offering little to no rationale for these. I would invite him to look at Barbara Tuchman‘s statement concerning… The historian becoming a prophet. I also didn’t care for his personal swipes at The wives of both Robert E. Lee and Abraham Lincoln. Mary Lincoln was a troubled woman and this has been well documented. Lee’s wife was a southern aristocrat used to getting her way. Neither of these facts are in any doubt but I did not care for the language that the author chose to describe them. Both of these descriptions smacked of the modern left-wing intellectual looking down his nose and applying modern standards to historical personages. It’s both unnecessary and in this case quite crude. Lastly I found it interesting that the first half of the book sees Ulysses S. Grant portrayed as something just shy of an idiot and in the second half he seems somehow to just get it all together and become a competent and even great general. The author does treat Clara Barton well and I learned some things that I did not know about her. His descriptions of southern racism and of the atrocities committed by southern soldiers against African-American soldiers are important and deserve to be read and remembered. The work is not bad. But I feel that the author should have limited his opinions or maybe greater effort to back them up with documentary evidence and kept his impressions of what was going on in the minds of both soldiers and civilians to himself unless he could point to letters, journal entries or some other means of documentation to back them up. If he did have such documentation he should have included it.

Too Much Social Justice

I was disappointed in this book. There was much material to be covered, but the author felt obligated to present the usual social opinions of modern scholars: nonwhites good, women good, white men arrogant, stupid and evil, especially Union white men. The first 5 hours of the book are basically a musical consisting of endless hymns to Social Justice linked by a “book” of actual history. After that, he begins to focus more on history, but cannot help returning to his bottle of Social Justice for another swig before going on with his story. There are about 5 hours of useful material here, and I did find that interesting and educational. Overall, I think the slog through the chaff was worth the wheat I discovered.

The author has nothing but praise forRobert E. Lee and the confederate generals while he has nothing but disdain for the Northern generals. He repeats the same old lies about Grant’s drinking. The author even states that Sherman was not a good general. It makes one wonder then how he cut right through the heart of the confederacy. In fact, the author makes you wonder how the North even won the war. This book is not history. It’s pure revisionist bulls**t. Don’t waste your credit. I will say the narrator did a good job.

Fascinating Story of the End of the Civil War

This is the third book by this author that I have read. He never disappoints. As with the other two books I have read, this book establishes the context of the last year of the war. I would say that there are three main characters: Lincoln, Grant, and Lee. There are secondary characters as well that do not go ignored. The book reads like a novel and that keeps it entertaining. The narrator does a very nice job that keeps the book interesting. I learned a great deal from reading the book. The Civil War was a special kind of hell for our country. That comes across in the book. The author does not avoid the complex issues of race and slavery. He points out that the oversimplifications of the causes of the war (states’ rights or slavery) need to be looked at in the light of many other factors. I can recommend this book to any person who wants to know how the last year of the Civil War put our country in a horrendous environment that we still feel.

Content is outstanding, the reading did not appeal to know for no particular reason. It never stopped me from listening, but I was always aware of it.

This is an outstanding history of the last year of the American Civil War in the East. Other Civil War histories that I have read gloss over or ignore this time period. It tells the painful story of incompetent Union generalship in the first months of Grant’s command that resulted in horrendous Union troop losses in the Wilderness, Spotsylvania, Cold Harbor and other battles. The cost of delay in Grant coming to recognize the evolution in defensive tactics of Lee’s army is accounted. Ultimately, Union troop strength before Petersburg stretched battle lines to Lee’s right resulting in ultimate weakness and subsequent overwhelming by attacks on multiple points. Northern and Southern racist views towards colored infantry are described with many striking accounts. Political plots against Lincoln by Democrats and radical Republicans are a study in Lincoln’s political skills. Major war personalities (Lincoln, Grant, Lee and Mosby) have mini-biographies presented. Myths surrounding Lee’s surrender at Appomattox Court House are debunked. There was no gallantry below the ranks of Grant and Lee. These were two armies that hated each other as one might expect after 4 years of slaughter and suffering. The final events leading to and surrounding wars end and Lincoln’s assassination are succinctly described. This history helps in understanding why the North and South were still at war (politically and culturally) after 100 years and why we as a nation continue to pay the price of our slavery history and only-partially-restrained racism.

Great Read, I wish Author would have read

A big fan of authors reading their own books. Great story and like the secondary stories Gwynne offers, especially Barton’s.

Great documentary history of the final year of the Civil War. A good emotional telling that puts to rest much of the myths Americans believe about the Confederacy and how that awful war ended. It's time the truth is embraced and studied by all Americans.

Great way to learn about the Civil War.

I was probably exposed to some of the history of the Civil War in school but that was long ago and I didn't remember much. This was a great way to learn more about this fascinating part of my country's history (now that I'm mature enough to appreciate it).

Great storytelling and easy to follow along with. A solid performance by the narrator. SC Gwynne books are a must listen