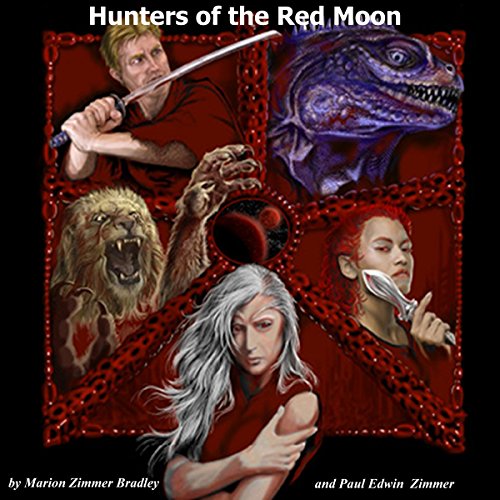 Hunters of the Red Moon

Hunters of the Red Moon

For the Hunters, the Hunt was a religion. The Sacred Prey, sentient beings collected from all over the galaxy, were literally given a fighting chance - they were allowed to choose weapons from an armory with every imaginable weapon and given time to train. Then they were taken to the place of the Hunt, where death awaited them. Those who survived until the eclipse of the red moon, however, were honored by the Hunters and rewarded with all the wealth they could desire. The trick, of course, was surviving.

This is a very basic mostly action fantasy with a few light sci-fi motifs. This is very 1970's and has not aged particularly well. I am not big on sword swinging romantic entanglement fantasy and that's what this is.
It is not bad, but I can't call it good. I actually liked a few books by Paul Zimmer so game this series a try.

The narration is not bad, but the sound production was very odd. Every thought of the protagonist is run through an echo machine. The narration (which is also from the protagonist point of view) is not echoed. I can usually tolerate almost any narration, but this was really annoying.

1970s social norms are apparent and annoying. suspense kept me an engage listener

Great story of surmounting the impossible

Marion's older, classic work. While not as extensive as later works, it's a great adventure.

One of my top 10 Sci-fi reads of all time. It’s worth the credit.

I wish this story never ended.

A must read for anyone who loved the princess of Mars series. love and death

Worth reading and listening to over and over again

I first read this book when my grandfather gave it to me as a young child. I loved it so much that I remembered it recently and decided to give the audiobook a try while on my travels. I find that the narration in this book is absolutely astounding. I love the way that the narrator speaks when the main character is thinking to himself. It really gives you a sense of what is going on in his head. The storyline itself is incredible and is definitely a fun read or listen if you have the time.Easily one of my top five favorites to listen to as well as agreed. Too bad Mary in Zimmer Bradley is no longer with us to create such stories. Look for the next book in the series of two. Happy reading