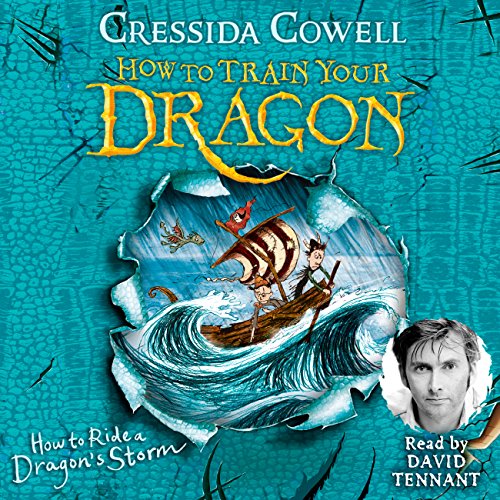 How to Ride a Dragon's Storm

The hilarious series which inspired the Dream Works film. Hiccup has three months, five days and six hours to get back to Berk, save his father, battle Polarserpents AND win the annual Inter-Tribal Friendly Swimming Race. Can he do it???? David Tennant reads this hilarious children's clasic which can be enjoyed by everybody.

Must listen to kids and adults alike

I honestly didn't think I'm going to like this series so much when I purchased the first audiobook. The stories are wonderful, and David makes them so much more alive with his narration. Highly recommended, to children and adults alike. No age limit here!

Five stars across the board - enough said.

Simply put - Excellent story and performance by David Tennant.
Five stars across the board - enough said.

I like kid books on occasion. Don't get into this one thinking its anything like the movie though. So long as you keep the two separate from each other its enjoyable even for adults. Very cute and adorable as well as a lot of fun.

Pirates and Dragon's Oh My!

Would you consider the audio edition of How to Ride a Dragon's Storm to be better than the print version?

Because my eyes are failing; I enjoy someone else reading to me, and if I had my druthers (which I do), I'd druther have David read to me.
He's the most entertaining, you know.

Norbert the Nut-Job, now, King of the Hysterics.

I just have a weakness for wacky inventors who are a bit eccentric, and can wheal an ax. . . That's just me.

What does David Tennant bring to the story that you wouldn’t experience if you just read the book?

His singing is: "Fabulous Darh-Link!"
His voice when he sings the Viking song about a land that they are going to, AGAIN. . .And the the other song which would never,ever scare anyone " The Death Walk" it's a quaint lil' ditty.

Well, there was the issue of taking the "Slave" mark imposed upon our hero, Hiccup to prove that he would keep his promise. (As I have privy to a lot of Hiccup's doing's) This is the first time he has had to make a promise.
And I was skeptical as to HOW he could keep it.
Because when you make a promise, you must keep your promise. . .
Or no-one will ever trust you again!

Since I got it last month I have only listened to it. . .oh, five or six times.
(I'm trying to learn the words to both songs-don't cha know).

Yes, they are well written and very entertaining.

We really enjoy them all.

Have you listened to any of David Tennant’s other performances before? How does this one compare?

We have only listened to him on the How to Train Your Dragon series.

It definitely makes you laugh!

This story is very entertaining, and the narration by David Tennant is fantastic! My kids, aged 7 and 10 have listened to this a number of times over the last year, and now quote all the lines they think are funny. We all highly recommend it.

If you've made it through the previous six stories in this sereis then you know what to expect - fanciful adventures involving nearly impossible situations and memorable characters. This story is no exception and is on par with some of the better tales in the series.

What sets apart our experience with this series is the inspired performance from narrator David Tennant. He doesn't just narrate the story, he gives a rollicking performance full of energy and hilarious characterizations. My kids listen to these repeatedly and like to imitate the vocalizations and accents for their favorite characters. These stories have become a fun family experience.

Really good audiobook, the story is very nice and the accent of the reader (David Tennant) has a great Viking feel to it. I‘m very Happy with it!