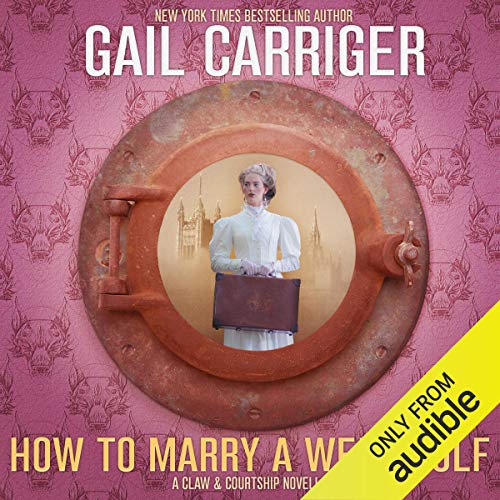 How to Marry a Werewolf

Guilty of an indiscretion? Time to marry a werewolf.

The monsters left Faith ruined in the eyes of society, so now they're her only option. Rejected by her family, Faith crosses the Atlantic, looking for a marriage of convenience and revenge. But things are done differently in London. Werewolves are civilized. At least they pretend to be.

Backward heathens with no culture, Major Channing has never had time for any of them. But there's something special about Faith. Channing finds himself fighting to prove himself and defend his species. But this werewolf has good reason not to trust human women.

Even if they learn to love, can either of them forgive?

From the best-selling author of the Parasol Protectorate series. Look out for appearances from favorite characters and the serious consequences of unwarranted geology.

A Note on Chronology

The Claw & Courtship novellas can be heard in any order. This book can be enjoyed without having heard any of Gail's other works. Set in the spring of 1896, this story occurs after events chronicled in Romancing the Werewolf.

Normally I LOVE Gail Carriger. But this one was...pretty bad. I'm actually doubting if Carriger actually wrote it. The prose was purple, the love scenes were cringeworthy, and the romance fell flat. Additionally, the production did this odd tinny effect anytime a character had a "thought," and it was very distracting.

I really can't recommend Carriger enough, but skip this one.

Wonderful to see Channing find Love. Heartbreaking to learn both pursuer and pursued are hiding such devastating secrets from their pasts. I enjoyed the narrator, but did not like the echoey effect they used to show when someone was thinking a monologue or comment instead of speaking it. Neat idea, but annoying in practice.

If you like Carriger's work you'll like this. Same funny wit, hilarious banter and great characters. You don't need to read the other novels in her series, but previous knowledge makes the enjoyment all the richer. Narrator is good, but there's some timing issues with the inner dialogue effects towards the end, hence the three stars. Otherwise, a highly enjoyable book.

I generally enjoy Gail Carriger's books, but this one might be best read oneself. The narrator has a lovely voice and changes her voice well to suit different characters, but her American accent was pretty bad, and I found myself too distracted by it that the story itself wound up feeling kind of rushed and lackluster. I could tell that the narrator struggled to maintain the accent she used for Faith's speech- it slipped into something closer to a southern drawl frequently (not fitting for a character from Boston, as we are told many times Faith is), and even more Australian sounding a few times. I also though it an odd choice to have Faith's thoughts narrated with a British accent, when she is an American character.
I felt, by the end, that there hadn't been much development of affection between Faith and Channing, but I'm not sure if that was part of the novella itself, or simply because I missed too much since i kept being distracted.

just did not like the echo effect for inner voice. throws you out of the story.

I love the whole world of steampunk, werewolves, vampires and romantic adventures. Gail Carrier brings these adventurous, humorous characters into your life.

Back to what I love with Gail Carriger’s stories

I love that some of the Parasol Protectorate characters are back. Great story, listened to it twice. You just need to get past the “internal voice/ thinking voice” it’s terrible for the first 10mins then the voice becomes better production quality. I still didn’t like the sound effect but you get used to it. The story is worth it!!! There must be a book 2, I hope.

The Major has a heart!

I love all the books written in this universe. Would love more books in this series, Claw and Courtship, and in the Delightfully Deadly series.Thank you for sharing your clever and funny books with us. No one should ever dismiss a wicker chicken again!

Really good writing as usual from Ms. Carriger & great performance from the narrator. Good balance of sexy and witty. Very consistent storytelling from beginning to end. A lot of callbacks from her previous works for fans of this world and her different series in it. Really good character development for a novella. Worth your time!

One of My Favorites!

I'm a fan of this author, so I was pretty sure I'd like this book. I enjoyed the Parasol Protectorate and the Finishing School series, so I was prepared to like more tales of London Supernatural high society.

I was still surprised by just how much I love this book. The narrator is superb, managing the various accents amazingly well and adding so much personality to the voices. The pace is wonderful, as well; a fairly short story that still addresses everything it needs to while never feeling rushed.

As much as I love the other books by Carriger, I find myself listening to this one again and again, more often than any of her other books in my collection. It's become one of my go-to books when I need something comforting and light but still interesting, like a cup of tea or a bowl of soup on a dreary day.

I definitely recommend this book, whether you are a fan of Carriger's alternate reality worlds, looking for a noncommittal trial of her work, or just like a bit of light but extremely well-written historical romance. It's more than worth your credit!

You can hear it alone, but I recommend hearing or reading Gail Carrigers other books prior. The characters presented here are gorgeous and a joy to read/hear.