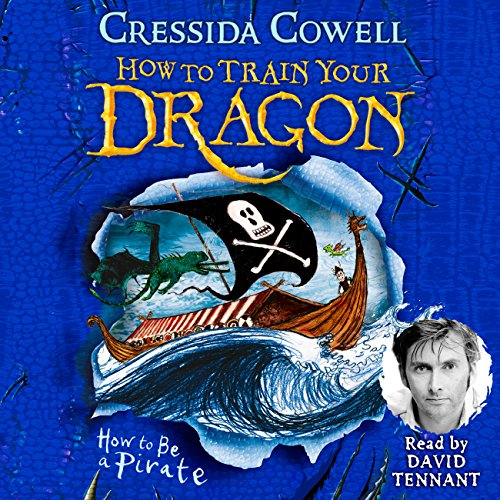 How to Be a Pirate

Listen to the books that inspired the How to Train Your Dragon films, narrated by David Tennant.

THE STORY CONTINUES in the second volume of Hiccup's How to Train Your Dragon memoirs....

Hiccup Horrendous Haddock III was an awesome sword-fighter, a dragon-whisperer and the greatest Viking Hero who ever lived. But it wasn't always like that. Hiccup's memoirs look back to when Hiccup was just an ordinary boy, and finding it very hard to be a Hero.

Can Hiccup find Grimbeard the Ghastly's treasure before Alvin the Treacherous gets his sneaky hands on it? And if Hiccup opens a box that says DO NOT OPEN, will he live to tell the tale?

How to Train Your Dragon is now a major DreamWorks franchise starring Gerard Butler, Cate Blanchett and Jonah Hill and the TV series, Riders of Berk, can be seen on CBeebies and Cartoon Network.

Read the rest of Hiccup's exploits in the rest of the series and check out the all-new Hiccup website at www.howtotrainyourdragonbooks.com. It's the place to go for games, downloads, activities and sneak peeks!

Ce que les auditeurs disent de How to Be a Pirate

David Tennant brings these enthralling stories to life brilliantly! Both my 10 year old and I were captured by this story. The stories are fantastic, but David Tennant makes them a joy to listen to.

What made the experience of listening to How to Be a Pirate the most enjoyable?

David Tennant is an awesome narrator. The story is already fantastic, but he puts such gusto, feeling, and humour into his voice that listening to is a million times better than me reading it. I put it on and curled up at night with my 2 nieces and listened to this. I have never seen them so enthralled by anything before.

It is so funny, the main characters are so likable. An excellent

Have you listened to any of David Tennant’s other performances before? How does this one compare?

All of David tennant's performances are awesome. This is just as fantastic as any of them. I hope he continues to narrate more children's stories.

My nieces held their breath and were wide eyed with anticipation about once every chapter.

I would really love to see audible release the Unabridged version. But for now, this abridged version is still fun and perfect for an Aunt's one week visit.

David Tennant is clearly having a ball while narrating this book. His enthusiasm is contagious and my kids absolutely are enthralled with this audiobook. They've listened to it several times in the last month. The story is fun (albeit simplistic) and the characters are memorable. If you enjoyed the first book then by all means get this one as well.

Very fun story. Super entertaining and wonderfully read. I'm looking forward to reading the next books in the series. Can recommend!

We loved this book.

I listened to this book with a family from Australia. The children ages are 9, 11 and 12. We loved all the twists in the book. The final epilogue was also special. We all want to say well done to the narrator.

This is great series with well written stories!

David tennant is amazing! his voice is perfect for this book. the first book was good, enough. this book was really exiting. loved the story.

Part 2 of the beginning of Hiccup's story

This book is still setting the stage for the entire series. Cressida Cowell does a great job of spinning an entertaining story that also has depth.

It's also quite witty which makes the peril seem a bit less perilous for younger readers.

Also, David Tennant is absolutely marvelous at reading these books. He has a great range of voices and of tone and listening to him is never boring.

The only thing missing is Cowell's unique and fun illustrations.

David Tennant does great voices in this performance. We loved it on our road trip (both over 30)

Cute story.
Awesome narration by David Tennant. He does an awesome job at narrating with youthful enthusiasm. Very credible voice for this story.

This book .as very interesting and dramatic. I love How to Train Your Dragon very much.