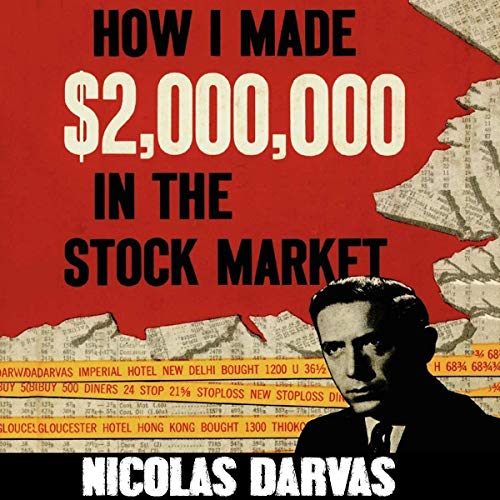 Hungarian by birth, Nicolas Darvas trained as an economist at the University of Budapest. Reluctant to remain in Hungary until either the Nazis or the Soviets took over, he fled at the age of 23 with a forged exit visa and 50 pounds sterling to stave off hunger in Istanbul, Turkey. During his off hours as a dancer, he read some 200 books on the market and the great speculators, spending as much as eight hours a day studying.

Darvas invested his money into a couple of stocks that had been hitting their 52-week high. He was utterly surprised that the stocks continued to rise and subsequently sold them to make a large profit. His main source of stock selection was Barron's Magazine. At the age of 39, after accumulating his fortune, Darvas documented his techniques in the book, How I Made 2,000,000 in the Stock Market. The book describes his unique "Box System", which he used to buy and sell stocks. Darvas' book remains a classic stock market text to this day.

Another inspiring stock market story! I think the best part about this book is that Darvas goes over many failures as he was trying to figure out how the market works, which is reality. Good stuff!

The story is very motivational. Its more of an investor pshycology and how to approach investing in stock market. Not greate resource for trading stratagies.
Overall its a great book i enjoyed listening.

Very candid! A must read for anyone who is into stock market stories.
Reviews must be 15 characters long.

Omg! Where are you flying to, Mr. Narrator? Reads too fast. Even after slowing the speed, it is still too fast. Also this book is just fluff. Waste of my credit. Nothing deep or useful to learn. Narrator also didn’t help to make it worthwhile. Bad bad bad!

Very good book. The author describes in detail how me made his millions. I felt that he was truly sincere especially when talks about the profits as well as the losses. I highly recommend it for finance minded individuals.

Very good- I’ll have to listen to it again while looking at the written book because there are many figures referenced (Of course - what would you expect when talking about stocks?). Overall very good.

Great book. we'll worth your time

Narrator was great. The stories are well put together as if someone laying out his experience in the stock market for you to learn from. Despite of the time when these stori3s occurred, they are very sound and I could relate to them during our current market.

gives color to why stocks move and how future traders improved his methods in stocks.

Okay, good story, not great. I think it’s a good way to understand it’s not you against the others in the market. It’s you and it’s a market.
I am actually going to recommend it to someone looking at speculative plays and a bit of FOMO.
He reads the tables in the book. But it makes sense for his system that he describes.
I would recommend this book.
The audio of the book was okay. The cadence of the narrator was good.
I think some people probably thought it was fast because he reading tables of information. For the general purpose of the book, I found the tables useful information, but I didn’t have to have the information right in front of me to understand what was being said.
Overall, a nice shorter audio book on trading systems and the lessons learned of a trader.

A True Story of Trial & Error

If you are a stock investor or an avid trader you need to read this book at least once. The author goes through his entire investing and trading career and tells you what mistakes he made in order to create a system built to make his 2 million dollars. That's the biggest lesson about this book: build a system.