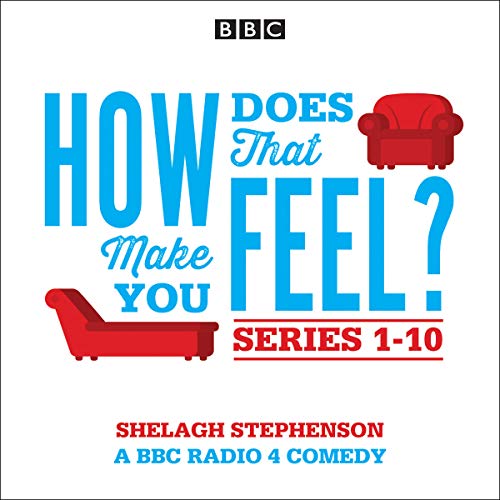 How Does That Make You Feel? Series 1-10

Psychotherapist Martha is reasonably compassionate, but deep down she's losing patience. It seems all her clients want to be something they are not, and it's driving them (and her) out of their minds.

There's Richard Fallon MP, who's convinced that promotion to the front bench is being denied him because of his obese son and a wife who lost all patience with him 20 years ago.

Caroline, who is worried that instead of following the path of celebrity like her, her daughter may go on to study mere physics - thereby consigning her (and more importantly Caroline) to a life of unbearable ordinariness.

Philip, who insists he isn't facing a crisis since his demotion from Good Morning Norfolk to a shopping channel, but whose new girlfriend is 30 years his junior and clearly on the make.

Howard, a chef whose 33-year-old son Aaron is still trying to get a band off the ground whilst looming resentfully over his parents’ lives from the back bedroom.

And Tony, Howard's boss at the restaurant, whose wife thinks he needs therapy. He has no idea why. Mostly he wants to talk about why women are so weird and why he has absolutely no need of a therapist. However, he would like Martha to give him a certificate proving his sanity, if possible.

Across a series of 15-minute comedy vignettes, How Does that Make You Feel? offers a fly-on-the-wall view of Martha’s sessions, each one shedding more light on the lives of her entertaining clients.

Produced and directed by Eoin O’Callaghan.

Ce que les auditeurs disent de How Does That Make You Feel? Series 1-10

There was a slow start for me as each session served to introduce the characters and get them to a point where they were 3-D. Until that was done I wasn't certain about this. Yet, I was constantly bemused and amused by this comedy drama. Then, there were bursts of laughter that started for me.

The entire series is a good snapshot of our lives today. We still muddle around with our goals, accomplishments, relationships, and embarrassing moments. But these days we do it with similar experiences - facebook, instagram, twitter, texting, smart phones, google, and we have common references - gluten free foods, new food prep machines, drawn-on eyebrows, Tinder dates, quantum physics, reiki, feng shui, annoying neighbors, custody of the dog after divorce, and viral fame or infamy due to social media.

My favorite character was Richard, played by Roger Allam. His portrayal got me to laugh out loud enough times that my belly got sore. Although my laughter was sometimes at moments that I suppose should have been sad - but Roger Allam manages to show the irony of situations with deftness.

This isn't a story with a beginning and an end. We pop into these people examining their lives, and at the end there is no resolution. There has been evolution and change, but there is no defined ending. Just like life.

It was enjoyable. The writing ranged very broadly in topics it touched on - if you are well-read or aware of many new issues there will be many times that you "ping" on shared knowledge..

Thoughtful and perceptive observations throughout the writing. The voice acting was superb.

I was very surprised at how much I loved this show. It’s just people talking about their messed-up, everyday, mundane lives, so I thought I’d be bored out of my mind. But I was actually riveted through every minute. The stories are delightful in the same way gossip about someone we don’t know is delightful, and sometimes you just have to say, ‘he said WHAT?!’
In addition to feeding our nosey itch, however, you also get very attached to Roger Allam’s haplessly lovable character.
Overall, I loved it, and I was sad when it was over.

funny and at times serious

Too funny; Snippets of sessions between a therapist and her patients. The listener is a fly in the wall and get to hear the client stories as they ramble on with the therapist who during the series gets and takes a tv opportunity. The clients' self-absorption is truly hysterical, while at the same time you can hear the underside of their struggles. Performances are great.

A pleasure to listen to

The voice actors were great, particularly the therapist of the first season.
The "stories" of the patients, while extravagant, are lacking diversity. Seems like everyone is dealing with similar personality disorders.