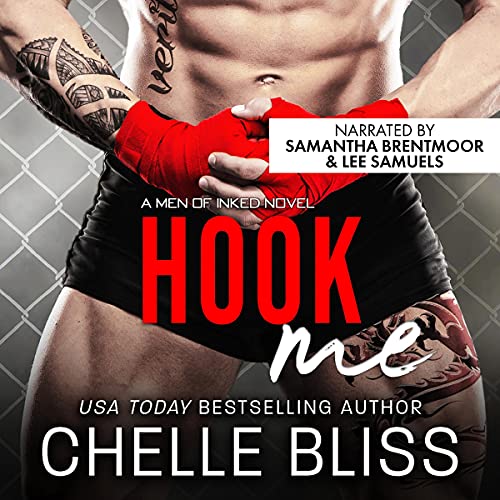 Michael Gallo found his calling in life; he wants to kick ass. He works at Inked as a piercer, but spends his mornings training and dreaming of winning an UFC championship. Michael is on the road to achieving his goal when a chance encounter alters his world forever. The title is no longer enough; he must capture the woman of his dreams.

Dr. Mia Greco is dedicated to saving lives and helping those less fortunate. She doesn't have time to meet Mr. Right with her busy schedule. She buries herself in her work and helping humanity. Fate steps in and sweeps the carpet out from under her. She tries to deny the pull to him, a man that uses his fists for gain, but the universe won't let her walk away so easy, and Michael isn't one to take no for an answer. He has a secret that may rip them apart. There are forces bigger than them at work; drawing them in and making their worlds collide; not letting either one of them walk away.

First, if you haven't read "Throttle Me", stop now and go get that one and read it. You do not necessarily have to read these in order as they are about different brothers, but you'll find out about Joe if you read this one and haven't read the first one.

These are wonderful, fun, easy, sexy reads. They stir up emotion and passion and make you long for your very own alpha male hottie.

Chelle Bliss herself is a great lady with a warm, welcoming personality. Look her up on facebook and enjoy getting to know her and the Gallo boys (and girl). You won't regret it.

Performance: if Lee Samuals narrated the entire book it might have stood a chance. His voice is super sexy. Unfortunately he didn't.

Female narrator: Her performance as Mia was ok, a little dramatic and full of too much exaggeration, but all the other females sounded like high school snot bags.... Like omg! As for the male voices....ughhhhhh..... Michael sounded like a bored and rude Rocky(Sylvester) not sexy at all!!! Every time it was her turn to narrate I cringed. She ruined the book for me.

Story: as for those that say this is a hot read I say get your head checked. On a hotness scale of 1-10 I give this a 2. The only good thing about this book was Lee Samuals voice. The story fell way short and had 0 excitement.

Overall i say save your credit and read something by Sawyer Bennett, or MJ fields.

Stories were ok Just continuation of the Gallo family saga. The narration needs work though. Lee Samuels is fine as City but not great as Suzy. Samara is ok as Suzy but does a nasally, whiny a City and is terrible with other male voices. This is clearly a case where it would be worth it to skip the alternating narration and get both narrators in the studios to act out the reading together with the male narrator doing the guy voices and the female doing girl voices. The rest could be split.

I really enjoyed this book and I can't wait to continue the series. The narrator's did a good job and I have no complaints. Mikey did not sound like Rocky and the girls not like valley girls. I would definitely recommend this book. If you have read the first one I would suggest you start there. The book is good alone but better if you've read Throttle.

I could listen to this over and over

If you could sum up Hook Me in three words, what would they be?

Summing up Hook Me in three words I would have to say it is HOT, SEXY and ADDICTING!

It is so hard to choose because I loved both Mia and Mike. They fit like jig saw puzzle pieces.. even if you had to work them a bit to figure out which way they went sometimes. Mia's voice character was spot on for how I thought Mia would sound. I loved listening to her the most. Mike's voice character was sexy and he did an excellent job.

My favorite scene is when City has his wreck and Mia meets Mike's family. That whole scene from beginning to end.

This is definitely a book I wanted to listen to from the beginning to end in one sitting. I hated having to turn it off and am so glad my car syncs up to my phone so I could turn it on while driving that way!

Reading This book was fantastic. Having it read to me by these two was an experience I will enjoy again and again. I'm looking forward to hearing the rest of the Men of Inked series in audio!

I loved this story! On audio it was the icing on the cake!! I thoroughly enjoyed it from beginning to end! Also, loved that the main characters were portrayed by a male & a female. It just makes it that much better!

Where does Hook Me rank among all the audiobooks you’ve listened to so far?

One of the best books I have ever listened to.

Michael is my favorite. He was my favorite in the paperback, but adding his voice into the mix just hooked me that much more.

What about Samara Naeymi and Lee Samuels ’s performance did you like?

There voices were spot on to what I imagined the characters would sound like.

Get ready to be HOOKED by another Gallo!

If you could sum up Hook Me in three words, what would they be?

What other book might you compare Hook Me to and why?

ANY OF THE MEN OF INKED SERIES BY CHELLE BLISSS!! THEY ARE ALPHA MEN AND THEY ALL LOVE EACH OTHER AND PROTECT WHAT IS THEIRS!

Have you listened to any of Samara Naeymi and Lee Samuels ’s other performances before? How does this one compare?

No I have not! This is the first time.

Yes it was!! I was able to drive and listen to one of my favorite authors books!

LOVED THE BOOK AND RECOMMEND ALL THE MEN OF INKED BOOKS BY CHELLE BLISS! FIVE STARS!! IF YOU LIKE ALPHA MEN..THIS IS YOUR SERIES!

I read the book and thought that hearing it being read to me would be mind blowing. I wasn't disappointed, but I honestly think I prefer reading it myself. I love Michael and Mia's story. I loved hearing it being read to me. I just found with my hands being idle, it wasn't the same. I would listen to more books. I guess since this was my first, it is taking me time to get used to listening but I will look into more audio books in the future. Great job by the narrators. I would recommend this to anyone whether they are audio book savvy or if they are new to it!!!!!!!

What made the experience of listening to Hook Me the most enjoyable?

I love the voices with the characters! It's the perfect fit & adds to the story!

What other book might you compare Hook Me to and why?

I love all of the Men Of Inked books! Micheal, like the others, has his own personality & Mia just adds to his perfection!

This is definately a book I couldn't put down! I had it playing in my ears while I was trying to work! I absolutely loved it!

Another awesome job by Chelle Bliss! I love the strong characters in this book!

Micheal Gallo is a fighter. Not a street fighter but the real deal! His life is family, piercing at the Gallo family business & fighting! He's training for the big fight! In that training, he fights & ends up in the ER! There walks in Mia, the ER doctor, to see about him! The electricity is apparent to the both of them! Micheal tries hard to win over Mia. She finally gives in! The book twists & turns through each of their past & present obstacles! Micheal's promiscuous past comes back in a big way to try to sabotage him & Mia! Can their love withstand the wrath of Tammy, Mikey's ex-fling? Can Mia look past Mikey's past? Mia has dreams & goals that she never imagined would ever happened!! Can Will pull it off to prove to Mia that she deserves the world & can achieve whatever she wants?!!

Amazing book! I was so caught up with the story & characters, that I couldn't put it down! Also, it was nice to read about Joseph aka City, Suzy & the other Gallo family members! I can't wait for Izzy's story next!

I want a brother, too!

Hot, sweet, beautiful. Makes you want to have one of those awesome brothers, too, and be part of this wonderful, loving family!