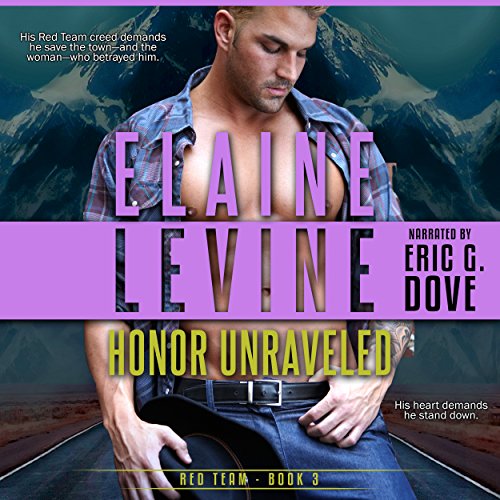 Kit Bolanger, ex-spec ops soldier, has followed the trail of an international drug lord back to his childhood town, the one place he swore never to return to. He and his team of terrorist hunters are the only thing standing between the town's residents and the evil threatening them. It doesn't help to know that she's here - the woman who betrayed his trust and shredded his heart.

Deciding to put roots down, Ivy Banks has brought her daughter home to the sleepy ranching community of Wolf Creek Bend, Wyoming - the one place where she was certain she'd never run into her high school flame. But he's back, fighting a global enemy and homegrown terrorists in a hidden war that puts their lives and their hearts in jeopardy. He was bad news in high school, and he's even worse news now. Surrendering to him is not an option...but it's the only thing he'll accept.

this book left me... unsatisfied. Kit was suppose to be a Red Team leader. But when it came to his relationship with Ivy, he was anything but. Ivy was conflicted as well and stayed in her confused head space for WAY too long into the story.I dint like Ivy character at all! I understand that she's wounded, that she has to rise a child alone and shunned, but I didn't get why she rejected Kit so much when she got the whole story.I also found very annoying Ivy insistence to date even after she and Kit slept together and he confessed that he want to be part of their life permanently.Other than this the book is good and interesting. I liked meeting all the characters from the previous books again and finding out what happened to them.

this multi layered mystery is awesome! I loved reading Kit and Ivy's love story and watching them fight insecurities and history to be together.

Continuation of a Great Series

Still as filled with action and intrigue as the other books in the series, Ivy and Kit steam this book up with a sizzling romance. More kick-ass characters to love.

Would you consider the audio edition of Honor Unraveled to be better than the print version?

Did not read the print version but very much enjoyed this story.

What other book might you compare Honor Unraveled to and why?

So far the stories have been very original to me.Loved the whole of KIt and Ivy. Loved Ivy because she was sincere in her doubts and honest about her failures. I am not a fan of female character who are unbelievable hard and have more testosterone than the men.

Want to hear more of Kellen. As a whole all of the heroes in this series have been beautifully portrayed. I bet Owen is another great story. absolutely love the voices . these are men you would want to know even Val.

All these men a so secure in their maleness there is nothing they shy away from. Loved Kit helping his daughter with her first period. I can see anyone of these guys holding his wife's handbag at the mall.