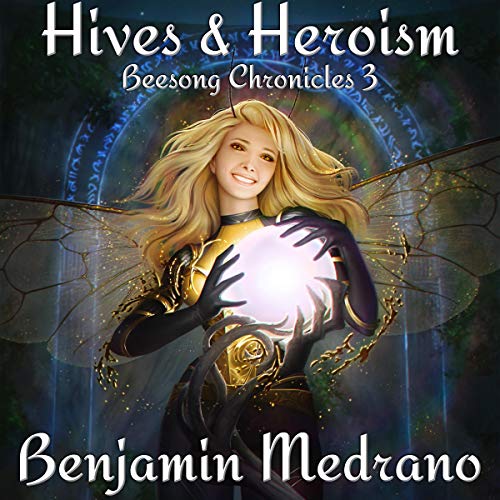 Despite Joy’s victory over Alethus’ servants, his plans haven’t been stopped. Even so, a glimmer of hope lies before her, and she and her friends are determined to grasp it.

That doesn’t mean it will be easy, though. An army is invading Dorma, one with the same destination as Joy. Their goals are sinister, but they aren’t going to stop Joy and her friends.

So, as an immense battle looms, Joy turns her enthusiastic optimism to ensuring that Alethus fails.

He has no idea what he’s dealing with.

She's a Bee, but not a Bumble Bee!

Bottle Line: The entire Sting and Song series has been one of my favorite fantasy series. Hives & Heroism is a lovely addition (hopefully not the last!) If you are looking for a book with female protagonists, some LGBTQ tones, and a cheery, fun story, this series is for you!

Joy and her friends return for their third adventure in this exciting, third installment of Benjamin Medrano's fantasy series, Sting and Song. We start pretty much where book two is finished, but the story flows in a very different way than one might expect. I was left on the edge of my seat towards the end and shocked by what happened!

Honey doesn't spoil, but books do, so that I will be vague...

We have a world where stagnation and endless shifting of power have to lead to a need for a new life to be breathed upon the world. Enter the Bee Girls! From building houses to eating honey, they perform very similar functions to their real-world analogs. Yet, they do so most adorably and excitingly.

The character joy continues to grow, as do her friends. The world and the world's mechanics, especially the meta-mechanics, continue to be built upon creating a fun fantasy setting that begs for a fourth book. The more we learn of Joy's people, the more questions we are left wondering. How many hives exist, and what will be their final place in the world. These topics are explored to a degree as we meet another hive and a different take on the same species.

The fight scenes are unique, with very unexpected results. Gone are the simple, stereotypical sword and sorcery fights, placed by aerial combat, unexpected battle methods, and very asymmetric tactics. Little details, such as the effects of a spell on each species, are essential to the story and used to further the plot and keep the reader carefully listening for any tiny detail, which may lead to what happens next.

loved the series and this was a great finally for the series, but now i desperately hope for a book 4. i doubt it will happen but we sure can hope.

Please let there be a sequel!

I can't let go of Joy! She has become one of my favorite MCs and the way she has been written is different from basically any other story I have come across!

I like the series, especially Joy's innocence mixed with savageness she shows when protecting her own. The series itself is very one sided as far as how easy the forces of dark is 2 steps ahead of the light the whole series. If it wasnt for the apis, they wouldnt even stand a chance. Things just go way to smoothly for the dark side. I really hope Ben continues joy's adventure.

Loved all 3 books. Really hope there is another book or at the very least, a follow on book. Seems like there are a lot of routes that can be taken from here on.

this is a story where you know whats going to happen and that never really matters.
joys character is so amazing that you just want to see what happens next even when you know what's coming. the other people really help flesh out the story and add nice twists to everything and really help elevate the story and pace
joy is what you want to be as a person happy curious loyal and ruthless to your enemies

I love this bubbly bee

Every book in this series has brought a smile to my face. I hope it will do so for you too.

I just enjoyed this.

Nothing more to say.

Same Style as the other two books and a well rounded one.

That the story sometimes follows the villain is the only fault I can find, I don't like those parts because in my opinion they don't add value to the story, they just lengthened it. Other than that I would be tempted to call this a perfect story. I must say I really hope the story continues but only if the quality stays this high, it would be a shame to destroy such a wonderful ending. Still as I said, I hope I can listen to more adventures of these lovely characters as they grow and explore new wonders.