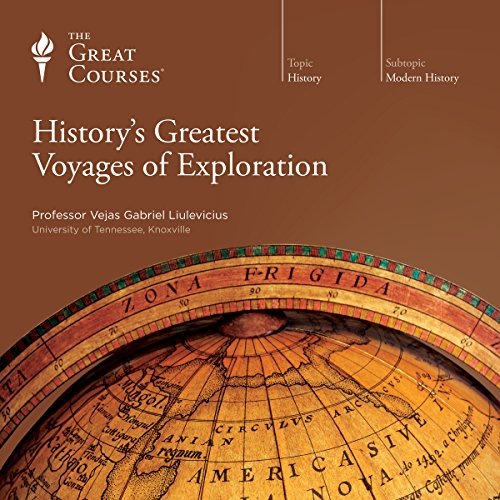 Mutiny. Disease. Starvation. Cannibals. From the ancient wayfarers to modern astronauts, world explorers have blazed trails fraught with danger. Yet, as History's Greatest Voyages of Exploration vividly demonstrates, exploration continues to be one of humanity's deepest impulses.

Across 24 lectures that unveil the process by which we came to know the far reaches of our planet, you'll witness the awe-inspiring and surprisingly interconnected tale of global exploration. An award-winning history professor from the University of Tennessee, Knoxville, revolutionizes how you view the world as he introduces you to some of the greatest and most influential explorers ever known-successful as well as unsuccessful, admirable as well as flawed. You'll be spellbound as you learn of the treacherous, at times fatal, expeditions into the unknown these adventurers embarked upon, whether to the frozen Poles, Asia, Europe, the Americas, Africa, the ocean's depths, or the final frontier of space.

Through it all, you consider what drove these intrepid individuals, from proselytizing and pilgrimage to the lure of wealth, conquest, fame, and new lands, as evidenced by the Vikings' arrival in North America; Marco Polo's journey along the Silk Road to China; Christopher Columbus' "Enterprise of the Indies"; the conquistadors' ravages in Latin America; and the tiny kingdom of Portugal's triumphant circumnavigation of Africa to seize control of trade in the Indian Ocean.

In every lesson, you'll follow these fascinating figures - including several remarkable women - as they venture into uncharted territory and put themselves, and often their crews, in dire peril. With Professor Liulevicius' uniquely global approach, you also get a meaningful portrait of the travels of non-Westerners, as well as the perspectives of discovered people.

Captivating from start to finish!

This title truly lives up to the standard of The Great Courses -- 24 highly engaging lectures with a brilliant an entertaining professor who brings history to life and makes the time fly by, while also continuously bringing everything into perspective and reminding you of the big picture themes that tie it all together. I was sorry it ended.

There were so many! I learned many truly fascinating things I didn't know about the most famous explorers like Columbus, Magellan, Lewis & Clark, and Henry Hudson... but even better were the significant remarkable stories about which I had known almost nothing: the revolutionary Buddhist monk Xuanzang who dared to journey to the west, Alexander von Humboldt the "second Columbus" whose prolific explorations were about advancing the understanding of our planet rather than about grabbing land or spreading religion, and perhaps my favorite: Ida Pfeiffer, a Victorian woman who defied the conventions of the day by journeying alone to exotic and dangerous locales, and invented the genre of travel writing.

I've listened to many of The Great Courses, but this was the first I'd heard by Professor Liulevicius. I'm pleased to see that he has several other titles and I've added them all to my Wish List!

I've loved many of The Great Courses but this one was among the most fun to listen to. I thought Liulevicius found just the right balance between the grand narrative and intriguing details from each voyage of exploration & discovery. I loved that he began "at the beginning," with human wanderings across the earth. His lecture on the colonization of the islands of the Pacific was particularly fascinating. He has lovely "asides" into Montaigne's early cultural relativism, Jules Verne's classics, The Odyssey, T.S. Eliot & more that contextualize the voyages he describes in wider social history. On top of all this he has an energetic and precise speaking-style that I found very pleasant to listen to.

A tear in the space/time continuium

If you could sum up History's Greatest Voyages of Exploration in three words, what would they be?

St. Brendon. This Irish Monk's tale of adventure is fascinating in the extreme. I need to learn much more about his travels and what really happened in Newfoundland.

Have you listened to any of Professor Vejas Gabriel Liulevicius’s other performances before? How does this one compare?

This is a masterpiece, I am still reading his "World War I: The Great War"

Step through a tear in the Space-Time Continuium to a new universe of Passion, Adventure and Exploration

I feel I have found a tear in the fabric of the space-time continuum, stepped through, and found a new universe unbelievably rich with passion, excitement, adventure and discoveries. My brain is on fire! This feeling comes from having completed The Great Courses “History’s Greatest Voyages of Exploration – an audible book of 24 lectures supported with a 159 page guidebook.
Although I was somewhat familiar with several of the “voyages” described in this course even the lectures on those had a lot of new insights and exciting information to capture my attention. However, the gold was in those lectures that introduced me to explorers that I knew nothing, or next to nothing, about. These were totally transfixing; they kept me engrossed to the exclusion of nearly everything else – transporting me completely to another world.
For example, I had not been aware of the a Phoenician fleet, contracted by an Egyptian pharaoh in the 7th century BC, that had sailed around the southern tip of Africa; nor did I have any knowledge of the journeys of Pytheas The Greek who, around 340-325 BC, ventured from the Mediterranean to Northern Europe to seek the edge of the world, doing such things as walking the circumference of Britain and then sailing north to perhaps what is now known as Iceland. I particularly want to learn more about St. Brendan (480-575 BC), an Irish Monk, who traveled in a leather boat to perhaps discover Newfoundland and other fascinating areas of the frozen north. I was intrigued to read that when the Vikings reached Newfoundland the Native Americans told them that white men in white robes had already been there and had left (monks apparently were not good at procreation and colony establishment).
Additional new revelations included:
• Buddhist monk Xuanzang’s journey to the West in the 600s – his unapproved departure from China on a quest for holy writings. This journey, decades long, resulted in his returning to China with a caravan loaded down with hundreds of boxes of scrolls and religious artifacts. He became a Buddhist saint across several Asian cultures.
• Ibn Battuta’s epic journey to explore the world and never take the same route next. He left Morocco in 1325; not see his hometown or family again for 24 years. Travelling through the Middle East, India, Asia, eastern Africa and Spain, staying the entire time within the network of Muslim civilization, he illustrates how the traveler binds together the world
These and much, much more made this course a magnificent portal to new great reads.
Lastly, the Bibliography of the guidebook is a rich resource for future reading. There is enough there to keep me going for the next 100 years and perhaps beyond – great stuff!

Could not put it down. Was sad it had to end.

This was an excellent course all around. I will be looking for more courses by this lecturer for my next credits.

What did you love best about History's Greatest Voyages of Exploration?

I'm a sucker for a story, I suppose, but each one of these explorations seemed to be the lynchpin of human history-- until the next episode was given! It just kept getting better. Professor Liulevicius' delivery is impeccable.

What was one of the most memorable moments of History's Greatest Voyages of Exploration?

I had not realized how determined "The West" had been to avoid Mediterranean pirates-- find the Northwest Passage. It seems to have been one motivator in quite a few explorations.

Which character – as performed by Professor Vejas Gabriel Liulevicius – was your favorite?

Get it. You won't be disappointed.

thank you The Great Courses, because of you guys I'm not so ashamed of skipping college and going to work at a car factory straight out of high school!

A wonderful survey of numerous fascinating ventures into both the know but chiefly the unknown. The course provides valuable knowledge of well-know discoverers as well as less-known ones. I learnt a lot from this course and and enjoyed following the progression of travels along time. Well worth the listen.

It was amazing to realize how little I knew about exploring and how much amazing things there are to learn.

If you want something light on this topic this is a good course. I found this to be a vague overview, not a detailed history. It does not stand up to works like "Rivers of Gold or "Conquest" by Hugh Thomas. He speaks as if speaking to children. A little too PC in places.

The title is not meant derogative, it´s simply that these 24 selfcontained chapters make for enjoyful and easy listening. I personally got quite hooked on the stories of James Cook and Alexander von Humbold and will read more about these guys. And the travel stories of Ida Pfeiffer (who introduced herself to cannibals as tough old meat) are next in order.