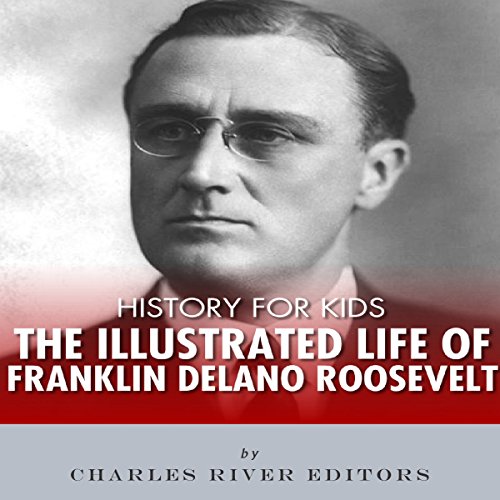 History for Kids: The Illustrated Life of Franklin D. Roosevelt

Perfect for ages seven to nine.

In Charles River Editors' History for Kids series, your children can learn about history's most important people and events in an easy, entertaining, and educational way. This concise but comprehensive audiobook will keep your kid's attention all the way to the end.

Franklin Delano Roosevelt might be America's greatest 20th century president, but there's no question that he was the most unique. A well-connected relative of Theodore Roosevelt, FDR was groomed for greatness until he was struck down by polio. Nevertheless, he persevered, rising through New York politics to reach the White House just as the country faced its greatest challenge since the Civil War, beginning his presidency with one of the most iconic lines ever spoken during an inaugural address.

For over a decade, President Roosevelt threw everything he had at the Great Depression, and then threw everything the country had at the Axis powers during World War II. Ultimately, he succumbed to illness in the middle of his fourth term, just before the Allies won the war.

History for Kids: The Illustrated Life of Franklin D. Roosevelt covers all the well known highlights of Roosevelt's life and presidency, but it also humanizes the nation's longest-serving president, covering Roosevelt's family and famous wife, the philosophical shift Roosevelt led the country through with the New Deal, and the tenacious fighter who battled polio and Adolf Hitler. Along the way, your kids will learn interesting facts about FDR, including his distant familial relationship with wife Eleanor.