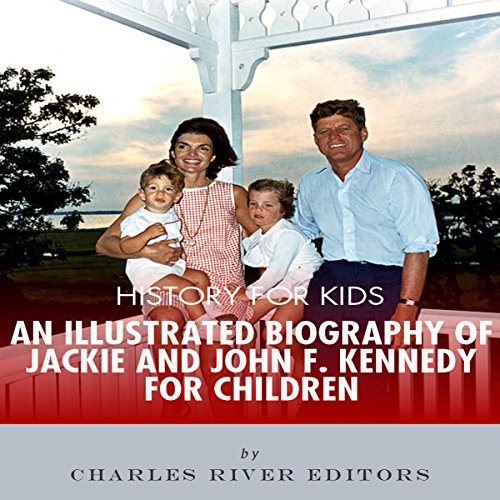 History for Kids: An Illustrated Biography of Jackie and John F. Kennedy for Children

"Don't let it be forgot that once there was a spot for one brief shining moment that was known as Camelot."

In many ways, John Fitzgerald Kennedy and his young family were the perfect embodiment of the '60s. The decade began with a sense of idealism, personified by the attractive Kennedy, his beautiful and fashionable wife, Jackie, and his young children. Months into his presidency, Kennedy exhorted the country to reach for the stars, calling upon the nation to send a man to the moon and back by the end of the decade. In 1961, Kennedy made it seem like anything was possible, and Americans were eager to believe him. The Kennedy years were fondly and famously labeled "Camelot" by Jackie herself, suggesting an almost mythical quality about the young president and his family.

Much of the glamour and vigor of Camelot, if not the majority of it, was supplied by first lady, Jackie Kennedy, whose elegance and grace made her the most popular woman in the world. Her popularity threatened to eclipse even her husband’s, who famously quipped on one presidential trip to France that he was "the man who accompanied Jacqueline Kennedy to Paris." Lady Jeanne Campbell put it best, writing for The London Evening Standard, "Jacqueline Kennedy has given the American people...one thing they have always lacked: majesty."