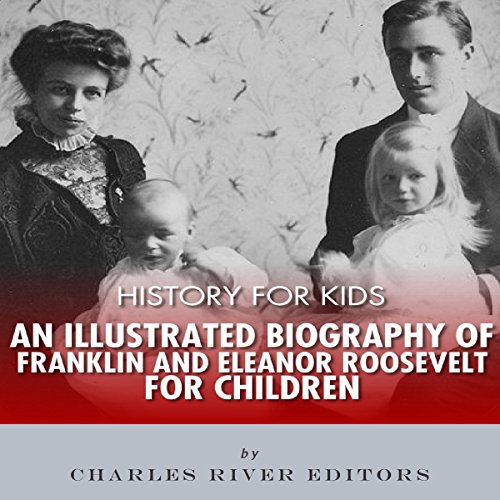 History for Kids: An Illustrated Biography of Franklin and Eleanor Roosevelt for Children

History for Kids: An Illustrated Biography of Franklin and Eleanor Roosevelt for Children

In Charles River Editors’ History for Kids series, your children can learn about history’s most important people and events in an easy, entertaining, and educational way. This concise but comprehensive audiobook will keep your kid's attention all the way to the end.

Franklin Delano Roosevelt might be America’s greatest 20th century president, but there’s no question that he was the most unique. A well-connected relative of Theodore Roosevelt, FDR was groomed for greatness until he was struck down by polio. Nevertheless, he persevered, rising through New York politics to reach the White House just as the country faced its greatest challenge since the Civil War, beginning his presidency with one of the most iconic lines ever spoken during an inaugural address.

For over a decade, President Roosevelt threw everything he had at the Great Depression, and then threw everything the country had at the Axis powers during World War II. Ultimately, he succumbed to illness in the middle of his fourth term, just before the Allies won the war.

If Dolley Madison was instrumental in molding the role of first lady in the 19th century, credit can be given to Eleanor Roosevelt for revolutionizing the political nature of the role in the 20th and 21st centuries and making it possible for presidents like Bill Clinton to enlist their wives to handle political duties. At the same time, history might remember Eleanor more for what she did outside of the White House, as she became a critically acclaimed and world famous international author and advocate of civil rights, women’s rights. By the time she had finished working for the United Nations, working on the Universal Declaration of Human Rights, President Truman rightly called her “The First Lady of the World."

Eleanor is one of her country’s most famous and admired first ladies, an ironic fact considering she was worried being the wife of a successful politician would force her to take on what she considered to be irrelevant ceremonial roles. But Franklin’s offices and illnesses made it possible for her to run in the social and political circles that interested her, and she began wielding substantial influence both for herself and on behalf of her husband. Much like Hillary and Bill Clinton, the Roosevelts' marriage evolved into one of friendship and political convenience as Eleanor became a political power player herself. By the end of the 1940s, Eleanor’s name was being bandied about for positions like governorships, the US Senate, and even the vice presidency, which was still completely unprecedented for a woman in those times.

History for Kids: An Illustrated Biography of Franklin and Eleanor Roosevelt covers all the well-known highlights of their lives, their relationship, and their work. Along the way, your kids will learn interesting facts about the Roosevelts and the important people and events in their lives.