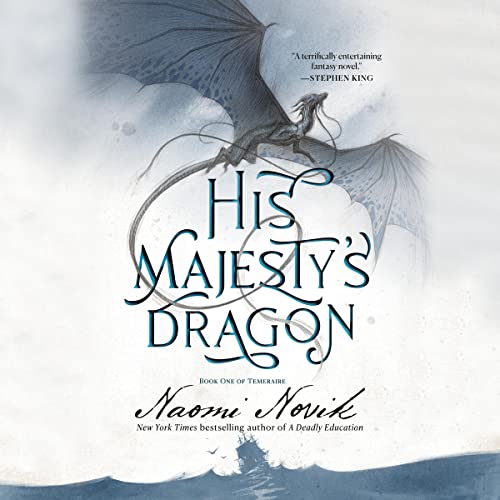 Aerial combat brings a thrilling new dimension to the Napoleonic Wars as valiant warriors rise to Britain's defense by taking to the skies - not aboard aircraft but atop the mighty backs of fighting dragons.

When HMS Reliant captures a French frigate and seizes its precious cargo - an unhatched dragon egg - fate sweeps Captain Will Laurence from his seafaring life into an uncertain future and an unexpected kinship with a most extraordinary creature.

Thrust into the rarified world of the Aerial Corps as master of the dragon Temeraire, he will face a crash course in the daring tactics of airborne battle. For as France's own dragon-borne forces rally to breach British soil in Bonaparte's boldest gambit, Laurence and Temeraire must soar into a baptism of fire.

“Just when you think you’ve seen every variation possibleon the dragon story, along comes Naomi Novik.... Her wonderful Temeraire is a dragon for the ages.” (Terry Brooks)

The tone of the writing fits the setting perfectly, and the narrator matches as though the book were written specifically for him.

Some reviewers have complained that the story is tedious. Certainly the writing style is deliberate and considered, but as I said, it matches the setting and especially the naval character of Lawrence, the main character whose perspective is our own. Anyone who needs a very fast-paced writing style (like Carl Hiassan) might dislike it, but anyone who can tolerate Tolkein would have no trouble.

Temeraire is delightful, and Lawrence is such a good man. His gradual shift from the navy to the aerial corps is believable and involving; his struggle with integrating himself into the new culture is fraught with pitfalls that are paralleled nicely by Temeraire's difficulty with being a rare breed.

Lawrence's stiff manner and preoccupation with propriety stem from a powerful and selfless desire to do the right thing, both for his country and for his loved ones, making behavior that would come off as pompous in another man seem heartfelt and honest from him.

What little aerial combat there is (surprisingly little if you're expecting a war, but for the story and Temeraire's age it's appropriate) is occasionally paced a bit oddly, but in truth, the action sequences are exceptionally easy to follow, dramatic, and realistic, with real consequences and believable decision-making, none of the absurd posturing of the usual fantasy battle scene.

In short, Naomi does an excellent job of convincing the reader that her world is real, that dragons are real, that we know a guy named Lawrence, that he has a dragon named Temeraire, and that we care about them both.

The comparison is a little simplistic, but this alternative history is tons of fun. The characters are consistant with the period, the writing is good, and Simon Vance is one of the best readers anywhere. I loved every minute of this book. A great adventure!

4 and a half was what I wanted, but it didn't quite reach my 5 star threshold.

Very Much Enjoyed This Book

I really enjoyed His Majesty's Dragon, and in the time since I finished it, I've come to appreciate it even more. I liked it while I was reading it, but in comparison to other things, this has stuck with me more. It is a delightful story, the narration was very good, and I give the book my highest recommendation.

I've got this weird thing going on where Naomi Novik and I actually were up for the same award when we first broke into the business, and she thoroughly trounced me. So I don't give this recommendation lightly, since she is--next to John Scalzi--my secondary evil nemesis :), but also by all accounts a very nice person.

I very much enjoyed this book and look forward to reading more of the series.

Story is very well written. The narration is enjoyable. I loved the Stieg Larson series in a big way because of Simon Vance's narration. I found out about this Dragon series from a list of favorite authors listed by Jim Butcher. It was a great pick! Well worth the Credit

If you could sum up His Majesty's Dragon in three words, what would they be?

Its an elegent story that is beautifully written. Langugage flows effortlessly from the author who has created a very civilized character.

Which character ??? as performed by Simon Vance ??? was your favorite?

Simon Vance does a great job throughout as usual. I come to expect the best from Simon and he delivers every single time.

There were moments when reader might feel that it is the reader who is riding the dragon instead of the character which can be very rewarding.

Normally, I do not read books with talking dragons; therefore, it is my first book with a dragon. I am happy that I took a chance that author and narrator has done a great job, and I look forward to the next book in the series.

I truly enjoyed this book. The author did a great job of combining fantasy with history. This novel is a combination of Hornblower and Eragon (but much better than Eragon). The author developed characters that are believable and have depth to them. The battles that the dragons fought is were fast moving. It is a great book to past your time in traffic, you may wish your drive was longer so you did not have to turn it off.

The Napoleonic wars - with dragons. Naomi Novik offers a unique view of the dragon rider - a core of the armed forces, with not a single rider, but a crew aboard a war harness complete with rifles bombs and swords aboard a winged battleship in areal battles, with warriors leaping across to "board" another dragon's back to fight to capture the Captain - the actual bonded dragon rider. What a fascinating portrayal. Novik's description of the various breeds of dragons in the world and weapons other than breathing fire (a rare gift), makes it also vary interesting. Her dialog captures the speech of British military men of the era, giving it a wonderful flavor. In addition, the audio reading of this book was excellent, down to the perfect British accents. The appendices at the end describing the various dragon breeds (the writings of the expert on the subject) were delightful and very well thought out. I have absolutely no complaints about this book and am eager to download the next volume.

Entertaining but Not Riveting

This book was a nice mix of Master and Commander and the Eragon series. I am not typically a fan of dragon focused fiction with the exception of the Paoloni series (but that is a whole other review). This book was entertaining and easy to listen to all the way through to the end….. However it was not riveting. The book had so much more potential to delve deeper into this world. I wanted more about the characters, the setting, and the dragons. While I try not to let details of the period distract me, I can’t help but notice them. Perhaps I have been spoiled too much from Bernard Cornwell’s books, but I enjoy books of this genre that can not only have a good story line, but also have great details of events, attire and equipment. While the author did a nice job of describing the dragons and their equipment, the same cannot be said about the military equipment, which at times was inaccurate. These are small and did not ruin the overall experience. I am troubled by the fact at the end of this book I was not compelled to get the next book in the series or even put it into my wish list. This is not the feeling I like to have when I start a new series, and therefore I doubt if I will continue to listen to these books. I would recommend this book if you are absolutely bored and want an easy to listen to book without much thinking required. I would rate it PG-13 as far as content and therefore could be a good listen for a family road trip if you are fine with your kids watching a movie of that rating.

An interesting combination, but not very lively.

While the premise of this series sounds riveting, and I had heard some good things, I actually found myself disappointed, all in all. There are a few neat parts, but somehow it felt fairly uneventful on the whole. And while I thought the narrator did an interesting job with Temeraire's voice, I don't think he lent much to what more active scenes did exist. It was however appropriate to the more Victorian aspects, in that most of the book read like the journal of a good-hearted but somewhat timid gentleman.

Perhaps the series picks up further on, but as for now, this book didn't entertain me enough that I feel motivated to give the others a try any time soon.

Actually, though it pains me to say it, this story might benefit from the editing that a movie translation would give it. At least so far as timing and engagement goes.

Good storytelling with believable characters (including the dragons) set in the Napoleonic wars. She does a fine job of keeping the flavor of historical fiction like C. S. Forester and Cornwal. There are still a couple of problems you need to try to overlook. The author has no sense of scale and no understanding of physics. Dragons change size, people jump from one to another in flight with wing spreads of hundreds of feet. Even with this I enjoyed it.

Naomi Novik's story and writing are amazing. It's full of warmth and gentle character development. I absolutely love Simon Vance, apart from the voice he uses when women are talking.

I bought this audiobook after reading "Uprooted" and "Spinning silver", because I craved for more good writing. The idea behind this book is interesting, but the writing, which tried to imitate period writing, is soooo pompous that it makes the story hard to follow and the characters perfectly uninteresting. It doesn't help that the reader is always keeping the same boring tone of voice even during bloodbaths