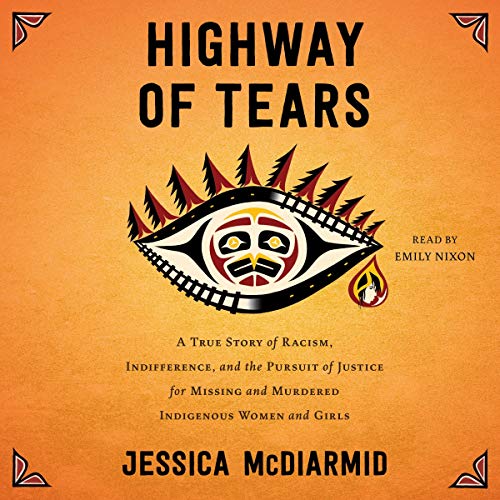 In the vein of the astonishing and eye-opening best sellers I’ll Be Gone in the Dark and The Line Becomes a River, this stunning work of investigative journalism follows a series of unsolved disappearances and murders of Indigenous women in rural British Columbia.

Along northern Canada’s Highway 16, a yellow billboard reads GIRLS, DON’T HITCHHIKE. KILLER ON THE LOOSE. The highway is a 450-mile stretch of dirt and asphalt, surrounded by rugged wilderness and snowy mountain peaks. It is known as the Highway of Tears. It is here that countless women and girls - most of them Indigenous - have vanished since 1969.

Highway of Tears explores the true story of what has happened along this troubled road. Journalist Jessica McDiarmid reassembles the lives of the victims - who they were, where they came from, who loved them, and what led them to the highway - and takes us into their families’ determined fight for the truth. The book also indicts the initial police investigations marred by incompetence and systemic racism, even as it shines a light on a larger phenomenon: the fact that more than a thousand Indigenous women have gone missing or been found murdered across Canada, a topic brought to international attention when Canadian Prime Minister Justin Trudeau opened an official inquiry into the case.

Combining hard-hitting reporting with a keen, human eye, Highway of Tears is a penetrating look at decades’ worth of tragedy and the fight to honor the victims by preserving their stories and providing them the justice they deserve.

Everyone should be disturbed listening to this tragedy. Perhaps better phrasing would be the repeatedly disregarded series of tragedies befalling young indigenous woman and girls. It's sad to say, but even more troubling is the appalling indifference of law enforcement and government agencies. Anyone who's had dealings with those institutions from a place of relative security, can only imagine the egregious apathy which faced those who are young, poor, indigenous, female, most who live in challenging economic circumstances. That alone should infuriate anyone listening. There is a lot of police doublespeak and government inertia. Then followed by promises, mostly broken, and those kept, ineptly implemented.

I may have liked it if author had delved more deeply into that very indifference. By portraying a young woman as "fiesty, fiery and didn't take crap from anyone", one can imagine those of a certain craven mindset viewing her (absolutely unfairly) as having been deserving whatever came her way. Distasteful as it is, I think most people can no doubt understand how that dismissiveness can be rationalized, if not condoned. It's imperative to confront and demolish those biases. But perhaps that's another book. Similarly, a few non-indigenous victims are detailed, specifically focusing on the discrepancy in police and media attention paid to them, as compared to the indigenous women and girls. But the author deftly presents this affront, without disrespecting the non-indigenous women and girls. Perhaps more could be made of that injustice of unequal attention, and not just on government, law enforcement and media, but on all of us, and all of our biases. Maybe that's another book, too. But these are mere quibbles. This book is necessary and important and heartbreaking. We all need to do more to help.

"Highway of tears" by Jessica MvDiarmid

Heart wrenching, very disruptive & well writen. I am so moved, I am unable to comp!ete it.

Really good and shocking story. Hard to believe this is still happening in Canada.

Focusing on missing and murdered First Nation women in Canada, this could happen to anyone.

heartbreaking, eye opener, I felt profound empathy and pain for what native american women go through. The Canadian and american white Male law enforcement and government should be ashamed.