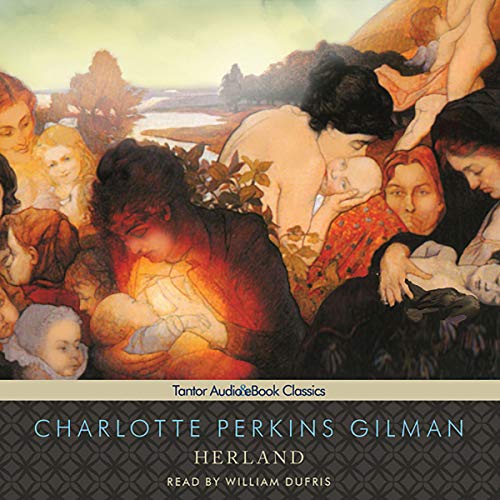 Charlotte Perkins Gilman's Herland, first published in 1915, is a feminist utopian novel that describes an isolated society composed entirely of women---a progressive, environmentally conscious land where peace and rationality reign and poverty is unknown. Told from the perspective of Vandyk Jennings, a male sociology student who sets out with his two friends to determine whether Herland really exists, the novel ironically and pointedly critiques the arbitrary nature of many gender norms as it highlights the irrational features of the men's society and asserts women's fundamental capacity for reason and cooperation. Herland is a landmark work of feminist thought whose themes are as vital today as they were in the early 20th century.

"Herland is utopia with a smlle, a gentle, witty version of what women can be. As fascinating to women for what it omits entirely as for what it discovers and invents for us, it is a fast and invigorating read." (Marge Plercy)

I had been deeply moved by C. P. Gilman's chilling short story The yellow wallpaper before I decided to listen to this utopia. The book is a thought-provoking description of a society populated by women only. Women are the only moving force, being capable of parthenogenesis (the ability to reproduce without men). Having established a perfect social order, the women of Herland live a noble life using "a clear, far-reaching judgment, and a strong well-used will".
By the way, the story is narrated through a man's eyes, who relates the events as an 'impartial' observer.
C. P. Gilman brought up the issue of stereotypes that dominate society and questioned the notion of gender: What is equality? What is femininity? Is it "reflected masculinity"? What are gender expectations? And what should define gender roles? Being totally independent of men, had the women of Herland ceased to be women? Should we put an equals sign between 'motherhood' and 'maternity'?
Certainly, C. P. Gilman had an unequivocal answer to these questions, but it was revolutionary back when the novel was written, in 1915. She pitted masculinity against femininity and ridiculed hackneyed prejudices and sexism.

This is a Feminist/Socialist Utopia where the act of sex has disappeared, but don’t let that make you think it is a total downer, this is also a really funny story. While the society is inherently simplified, and rather…well, sexist, it is also light hearted. The author has an agenda, but time tries to win people over with honey and not vinegar. Hopefully you at least smile at the antics of the American men, and the superiority of the mothers of Herland. The audiobook starts off with a 54 minute forward that puts the work in its social context, I enjoyed this, but you may decide to jump over it.

This is an incredible book particularly for its time but so prescient at this moment! How is it that women decide to govern a world where there are no men? When you take away all that is male and women do not have to contend with this as they decide on a path forward what priorities do they choose? So much food for thought!

Would you listen to Herland again? Why?

Yes. It's not overly long. Really enjoyed the narrator and the story.

The strange story - three guys in a biplane in an undiscovered utopia of women. I enjoyed imagining the characters and the scenes. The story was a little escape (in the midst of my daily activities), to a mysterious, somewhat magical place. I found myself wanting to return there, again and again.

Have you listened to any of William Dufris’s other performances before? How does this one compare?

I'm new to Dufris, but I liked him so much that I sought out (and purchased) another one of his narrations. He really animates the characters with his voice. I got a good mental picture of the world of "Herland" through Dufris' narration.

I loved the way Jeff held the women, all women, in such high esteem. Terry was a big, blustery sourpuss of machismo. Haven't we all known a "Terry"? I found myself just shaking my head over some of his comments. You knew he was going to fall and fall hard. And he did.

"Herland" was required reading for a class I took, otherwise, I never would have known about it. Feel like I discovered a gem. I knew "The Yellow Wallpaper", but "Herland" was a real treat. It brought me back to when my own four kids were young and needed mothering. Those were pretty crazy, intense years, but "Herland" actually made me miss them, and those four little munchkins who are now very grown up adults.

It an interesting analysis of our civilization through the eyes of 3 men, trying to understand a world of women only

This story shows its age but was and still is a amazing analysis of gender roles. I loved the fully developed world of Herland. The narrator made me forget he was there so I could immerse myself in the story

This might be my new favorite book of all time. A bold way of shaping an social structure that lives in harmony with the earth and her inhabitants.