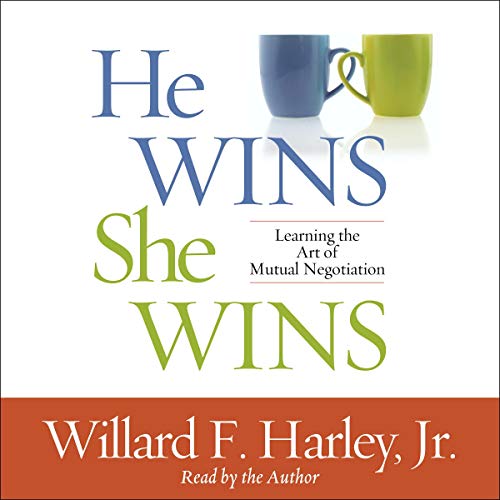 He Wins, She Wins

When you get married, you expect your relationship to be a partnership in which you make decisions and face the world together, united. But often a husband's perspective and a wife's perspective on the same issue can be very different, and unity in decision-making can be tough. Should spouses take turns getting their way? Should they compromise? Can they avoid making decisions altogether? Dr. Harley says there's a better way - a way in which both partners get what they want and believe is best every time.

In He Wins, She Wins, Dr. Harley introduces the revolutionary concept of joint agreement in marriage that keeps both husband and wife on equal footing and equally satisfied. This win-win model for negotiation starts with a simple rule: Never do anything without enthusiastic agreement between you and your spouse. Dr. Harley walks couples through the five most common sources of conflict in marriage (friends and family, career and time management, finances, children, and sex), applying the joint agreement rule in every situation. And he teaches listeners how to resolve conflicts the right way, so that not only are those conflicts resolved once and for all, but the couple's love for one another actually grows and is sustained for the rest of their lives.

Anyone who has been married long enough to have a disagreement will benefit from this unique new book from everyone's favorite marriage doctor.

This book is great for anyone to read that is married. The book discusses how conflict impacts our marriage and a method for resolving conflict in marriage. I highly recommend this book to anyone married or thinking about getting married.

I love how he framed the different styles of going about things to show that enthusiastic agreement was the best choice even if difficult and takes time. Great book!