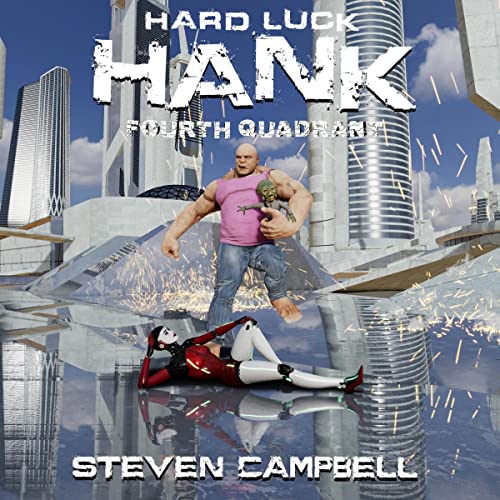 The royal family of a powerful empire are visiting Belvaille for an upcoming diplomatic summit. But their plans are somewhat interrupted when the galaxy’s premier assassin shows up and eliminates every single aristocrat. All except for one child who had been hidden.

Hank is happy minding his own business. Of course, his business entails robbing, extorting, eating lots of food, and fighting. But compared with the rest of the criminals of his city, he’s practically a saint. However, Hank’s easy existence is interrupted by the chief of security who entrusts him with safeguarding the royal survivor.

Along with his unsavory friends, Hank struggles to keep the last child alive while avoiding the navy, bounty hunters, organized crime, and the most successful assassin in history. If Hank fails, it will result in catastrophic economic collapse brought about by a vengeful empire.

First off, I want to say I have enjoyed every Hard Luck Hank book so far, even the one centered on Garm, however this one was a slog to get through. It really does feel like the author is getting bored of Hank unfortunately. I think my biggest complaint is that Hank is getting progressively less intelligent. Hank has always been the lovable buffoon, but he is not the same character that he began as. Hank cant even shoot a freaking gun in this book, He literally has to be told how to hold it and which end to point at the bad guy, I get that Hank has never been the best shot but he has literally carried a gun in every book so far, so it would stand to reason that he knows how to hold one. He went from solving crimes, being a professional athlete, negotiating million credit deals with gangsters, and literally saving the universe to throwing clumps of dirt in the back while others do all the thinking for him. I feel like the author has taken our beloved Hank and reduced him to a complete and utter moron.
Spoilers***
The other complaint is the story doesn't go anywhere. Hank gets a kid to watch, wonders around in the wilderness for a while for no reason and no payoff then comes back and gets in a fight. The kid goes home. The entire middle of the book is completely pointless and useless. It was mildly entertaining seeing Hank out in the wilderness but it was hard to stomach because of his reduced intelligence. But there is not reason for having him go out in the wilderness in the first place, a point the author even makes after having his characters come back with one saying why did we bother to go hide when we have Hank who is indestructible with us?

My final complaint is the lack of resolution with the ending in the last book. Hank is transported to a new dimension/universe with all the same characters in it, a new Bellvaile with new people. But the Author never addresses that these are completely different people. We are just supposed to forget about all the characters that we knew and believe that these new people act and behave and have the same history as the other dimension, meanwhile the actual Garm, Delovoa, Clisten, MTB and other people we have grown to love, rot in the other dimension. Its like the author doesn't realize that because they have the same name doesn't make them the same people. Maybe he believes twins are the same person and we can swap them in and out at will and it doesn't matter.

I guess I am feeling jaded by the Author after being a loyal fan for so long. I hope he can pull it together and write like he cares about the characters he created and not just throw us around with endless narration and pointless details.

If you are a fan you will probably want to read this one, just beware it's not good and hopefully it gets us to the next book which will hopefully be better.

Really good one, recommend it fully.

Lots of humor and action. Weirdest part was when Liam tells something not seen through Hanks pov, like telling something what is going on somewhere else. His voice-acting is the same (so it feels weird). Other than that happening, it was awesome. The story takes Hank and his friends out in the wilderness, meeting serial killers and what not... most entertaining. I am not sure it´s a huge progression towards something but it doesn't matter. I was entertained and I loved it.

I love Hank. This book was ultimately pointless. Nothing really significant happened other than Hank doing his normal bumbling best and accidentally -as well as on purpose, killing a bunch of people. Normally we have a new setting, a new situation Hank fits himself into, and he hilariously bumbles through a major world / star system / Galaxy wide intervention in his own unique way. None of that happened this time. I still rated it three stars, because it was Hank being Hank for 8 plus hours, but this is absolutely not Steven Campbell's best work. Ultimately, nothing of any significance really happened in the story. We didn't get the really new situation we were hoping for, or Hank truly intervening in the way he has done in previous books. Disappointed. Not recommended for anyone but die hard Hank fans

Hank has to babysit.

And has to go camping. This book is hilarious. go ahead and buy this one.

This fan is pretty disappointed

I have listened to and enjoyed all of the Hard Luck Hank books so far. Some were a little rougher on the story than others but all were at least entertaining and the performances from Liam Owen have always been fantastic. The point of view in this entry to the series is third person for some reason and really feels off. Hanks voice is narrating and talking about himself in third person. I don't get it - first person was working so well for this series why the change? The story is completely flat. Things are thrown in that end up being completely useless and just take away from the actual plot. At the end the author even wraps one pretty major story beat up with "We still don't know why this happened but who cares now, it's over.."

I love these books, I was really not expecting this to be so far off from the rest of the series. I hesitate to even recommend this to fans. The only reason this entry is tolerable is because of Liam Owen.

the series is starting to fall flat

I can’t tell you how many times I laughed out loud. I’ve listened to all of the Hank books. Some were hits, some were misses. This one was a hit! It had that twisted, dry, and juvenile sense of humor that I have come to love. Author plus narrator = excellence!

The story moves super slow and doesn't Seem to be going anywhere. Having a hard time keeping up with all the details.. This is not the best work the best work if I would have started with this book I would have not read any others. The narrator is great but the story is just painful I couldn't even make it all the way through.

Another Great Hank Book! Next One Please!

Yet Another Great Addition to the Hard Luck Hank Saga by Campbell & Performance by Owens. Can't Wait for the Next One haha Worth the Credit/ Money & Time!

Liam Owen is perfect for playing Hank. always a good listen. my wife and I love hard luck hank