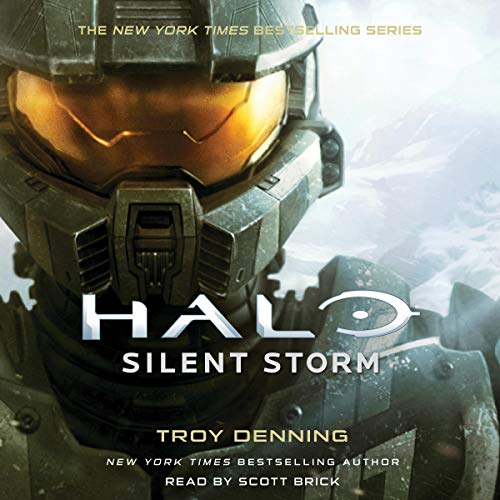 An original full-length novel set in the Halo universe and based on the New York Times best-selling video game series.

It's 2526. It has been almost a year since humanity engaged in its destructive first contact with a theocratic military alliance of alien races known as the Covenant. Now, the hostilities have led to open war, and the United Nations Space Command understands virtually nothing about its new enemy. There are only two certainties - the Covenant is determined to eradicate humanity, and they have the superior technology to do just that. The UNSC’s only hope lies with the Spartans: enhanced super-soldiers trained from childhood via a clandestine black-ops project to be living weapons. Their designated commander, Petty Officer John-117, has been assigned to lead the Spartans on a desperate counterattack designed to rock the Covenant back on its heels and to buy humanity the time it needs to gather intelligence and prepare its defenses.

But not everyone wants the Spartans to succeed. A coalition of human rebel leaders believes an alliance with the Covenant to be its best hope of finally winning independence from the Unified Earth Government. To further their plans, the insurrectionists have dispatched a sleeper agent to sabotage the UNSC counterattack - and ensure that John-117 and the Spartans never return from battle....

The return of the Chief

This takes the second place in my top 10 Halo books, just behind The Fall of Reach (because it's the Lore core). We return at the begining of the Great War, when the covenants are truly terrifying and humanity must face total anihilation. The writing style is excellent (special mention for the strategic brefings of each side), the story fills (partially) the biggest gap in the Halo chronology, and the narrator knows very well how to play each character. Absolutely wonderful ! A must-have for the fans of the Chief.

A return to form

I have been disappointed with the recent direction of the Halo novels. Silent Storm is a return to what made me fall in love with the series. Complex characters, and good old military sci-fi. Great read.

Being a long time fan of the Halo Franchise, owning most of the books and playing all of the games, I have been somewhat disappointed by the later books that have been released. While they are all excellent in their own right, I had always wanted to read more about the early years of the war and with Silent Storm my wishes were answered. Truly an interesting story that drops the reader back into the action with the Spartans.

Another fantastic entry to the series

Spoiler free....If you liked any of the chief centric books you'll like this. Great narration by scott brick. Gives some background to the chiefs past without being boring as it is a prequel. Great action, multiple points of view from human and covenant. My only regret is that they dont make games or DLCs out of these stories as they would be a hoot! I am a legacy halo fan having read every single book. With book 2 of the forerunner saga being my least favorite and of course fall of reach being my favorite. Hopefully we will get more snippets into the chiefs past with future books.

Scott Brick really needs to stop being the go-to for Halo books. You either get him and a monotone drone (new blood) or sounding like he is on the verge of crying for an entire book (hunters in the dark). That being said of all of the Halo books he has done this one is probably the best. It seems like he is trying a little for once. Please, if anyone from the publishing company is reading this, give some new folks a chance to get involved with the franchise and bring some variety to the people that enjoy listening to these books... That or bring back some of the folks that have given really good performances in the past like Todd McLaren, Jonathan Davis, Euan Mortan, Timothy Dadabo, Jennifer Taylor, Holter Graham, etc.

I felt a little lost in the huge library of Halo novels, since I haven't read many since the original series. "Silent Storm" jumps right into John 117's origin, and brings along some great characters as well. Well-written action, and I also love Scott Brick's narration throughout.

Sgt. Johnson is just as funny as I always thought he was. Also found new respect for all the characters too. Would really recommend this.

A great back story prequil, with enough action to savor. Interesting and captivating Halo story.

Honestly halo last light was my favorite halo book for a long time but after listening to this one? Not anymore. Silent storm was an amazing look into the past and I really enjoyed seeing more of the war chief brutes.

Excellent Story excellent voices. The novel is a great story to see how the Master Chief learns his leadership skills.

A must have for every HALO fan

A great story about the Spartan-II's and Sargent A.J.Johnson in the 2525s. Spartan-II beginnings and the struggle with FleetCom. Next to the main story something about the Innies and a mole inside the Battle team.