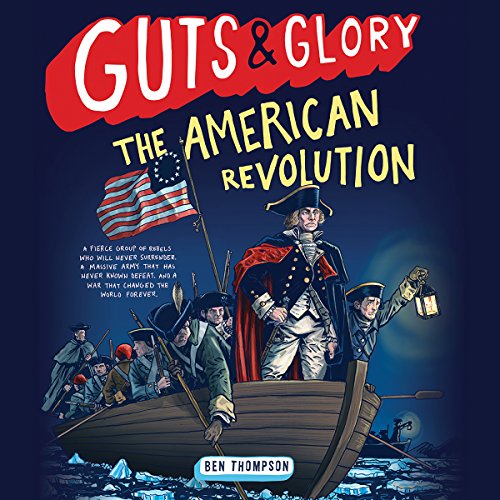 A fierce group of rebels who will never surrender.

An empire with an army that has never known defeat.

And a war that changed the world forever.

From George Washington crossing the icy Delaware to Molly Pitcher fearlessly firing her cannon, the people of the American Revolution were some of the bravest and most inspiring of all time. Jump into a riot in the streets of Boston, join the Culper Spy Ring as they steal secrets in the dead of night, and watch the signing of the Declaration of Independence in this accessible guide to the birth of the United States.

"The strength here, as in others in the series, is the lively storytelling style...lovers of Hamilton: An American Musical will enjoy the information and breezy tone." ( Kirkus Reviews)

My 9yo history loving son really enjoyed this audiobook. I personally disliked some of the slang and informal language but overall, it was engaging and educational.

I used this with my boys aged 6-13 for our study of the American Revolution in our homeschool. We all learned so much, and listening to a chapter was a highlight of our school day.

I need to choose a book to read for school, I am a history buff so I thought I would get this. And oh my god, I made the best decision of my life. This is so fun to listen to when it's my reading time. I am looking forward to listening to the other Guts and Glory books! I suggest that you buy this book, It is really interesting. Tip for the author: Make a ww1, Vietnam, and the Cold War Guts and Glory book. Keep up the good work!

used this book as a text book for homeschooling the American Revolution. the entire family loved it!

Lately nine year old has been extremely interested in warfare, and I was looking for something that was educational and engaging. This book fits the bill. We will be listening to this many times, and will share it with the rest of the family in the future.

the voice of the book was wonderful. It really let the reader understand every piece of American history. great job.