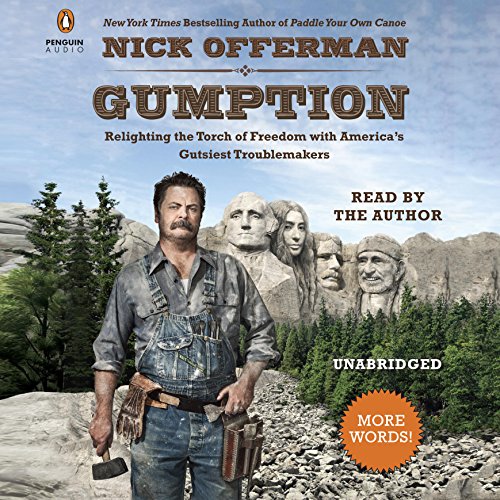 The star of Parks and Recreation and author of the New York Times best seller Paddle Your Own Canoe returns with a second book that humorously highlights 21 figures from our nation’s history, from her inception to present day - Nick’s personal pantheon of “great Americans".

To millions of people, Nick Offerman is America. Both Nick and his character, Ron Swanson, are known for their humor and patriotism in equal measure.

After the great success of his autobiography, Paddle Your Own Canoe, Offerman now focuses on the lives of those who inspired him. From George Washington to Willie Nelson, he describes 21 heroic figures and why they inspire in him such great meaning. He’ll combine both serious history with light-hearted humor - comparing, say, George Washington’s wooden teeth to his own experience as a woodworker. The subject matter will also allow Offerman to expound upon his favorite topics, which listeners love to hear - areas such as religion, politics, woodworking and handcrafting, agriculture, creativity, philosophy, fashion, and, of course, meat.

Nick Offerman made me laugh out loud in public without shame. Thank you good sir.

Many of the other reviews have said the same: the beginning of the book is interesting, telling stories of Americans with gumption with humor. But then the book devolves into Mr Offerman lecturing the reader/listener. If you agree with his opinions (which I often did) his relentless lecturing gets boring and oppressive, and if you do not agree (which I did on other subjects), then he certainly comes off as uninformed and wildly arrogant. The stories stop being about Americans with real gumption but turn into platforms for Mr. Offerman's opinions.

The book started off well, but quickly devolved from a book about 'people who had gumption' to 'I have a lot of famous friends, let me tell you about them.' If you practice any kind of religion, if you are white, or male, have ever owned a firearm, or are anywhere near conservative in your beliefs, prepare to be shamed.

loved his other books, skip this one

I'm a fan of the author. I have enjoyed his other works. However I was not a fan of this one. just too much mixing of subjective opinions and occasional facts. I prefer either opinions or facts. not both.

Nick Offerman sold me on this book when I read that it would feature Theodore Roosevelt, Carol Burnett and Jeff Tweedy. I like Offerman -- you know where you stand with guys like him, and you know where guys like him stand on issues.
Each chapter details the lives and heroism of its subjects. Offerman makes strong cases for each person he picked, and uses their gumption as a springboard for his own views on politics, religion, comedy, the environment, and a host of other issues.

Offerman is likable and his main points -- that we need to be people of courage and kindness -- are timely and poignant.
What I didn't like about the book is that Offerman takes the opportunity in nearly every chapter to lay out his case about the same few topics. Certain types of religious folks, especially evangelical Christians, are the subject of many of these rants. The other thing that I struggled with is that his modern heroes are all his buddies or folks he already admired in some way. He wasn't moved by discovery very often, so the reader doesn't get the thrill of discovery with him. I agree with him that this type of book is "necessarily subjective," but the later chapters lack the freshness and enthusiasm as the earlier ones, simply because more research and discovery were involved.

It was just ok

I love Nick Offerman. He and I agree on a ton of things, but this book just isn't one of them. It was well written and listening to him made it ok, but it just felt a little too preachy for my taste.

Started out good but faded quickly

The first few chapters were fascinating and very well done. However the rest of the chapters devolved into sarcastic and left leaning political commentary. I couldn’t make it through the book.

Entertaining, but Offerman loses his way

Gumption is humorous. Not uproarious nor silly, neither cerebral nor aloof, the book is exactly what you'd expect from a self-aware, but decidedly out of touch celebrity.

Offerman is an entertaining writer, but he struggles to balance the character he has created for himself and the man behind his mask. In speaking of his character, I'm not referring to Ron Swanson, his famous alter-ego from "Parks & Recreation." Offerman has carefully crafted a character he portrays in public for television interviews and public appearances; he's a rugged individualist who prides himself on labor, craftsmanship and (somehow related) independent thought. He lauds such attributes in characters from America's past and some of his contemporaries.

It is when he gets to contemporary figures where he loses the plot. I love Conan O'Brien and find him to be a quite humorous man; I likewise think Wilco is brilliant. I can't, however, imagine a scenario where there accomplishments would be stacked up against America's "gutsiest troublemakers" like George Washington, Benjamin Franklin James Madison and Elenor Roosevelt. The gravitas of the opening chapters so greatly overshadows the relative lightweights of the closing cast of characters as to render the overall point of the book almost nullified. Too bad. It starts great, but ends weak.

I am big fan of Nick Offerman and his works. Even more so now. I am not much of a reader, mainly because I find myself dozing off after a page or two of any book, so audio is definitely my favorite option. The author's voice is very pleasant I must say. -Nick, if things don't work out with Mr. Tweedy, I would gladly take his place. haha. However, I am also a heterosexual and married to and outstanding woman whom I still sometimes don't understand how I managed to land- While I cannot say I agree with 100% of his political views, I respect and can understand his opinions. And as I've learned, I feel the author would nod in approval. I enjoyed the bits of history and will be researching more about the lives of the people on his list.

I would recommend this book to anyone who is interested in understanding the importance of progressing the "togetherness of humankind". From this book, and his last, I have grow in maturity and have truly come to know myself better; or at least now I have a better way to explain how I really feel about religion and the world.

I rate this book a 5 across the board. Nick is a great story teller and I do hope he will be writing another soon.

I love the author, and he starts off strong with witty and insightful explorations of historical figures. Unfortunately he then veers off into significantly lesser known individuals (a maker of hand tools, really?), and things fall apart. Not only are the subjects of interest only to the author, he begins using the individuals being profile simply as launch points for his political beliefs. It was hardly about the individuals at all. I have no problem with the author's political leanings, it simply isn't what this book was sold as, nor was it what I wanted to hear.

He should have stuck to exploring the lives of those with great gumption, and found some more folks with wider appeal than wooden boat builders and obscure artists with no particularly compelling story.