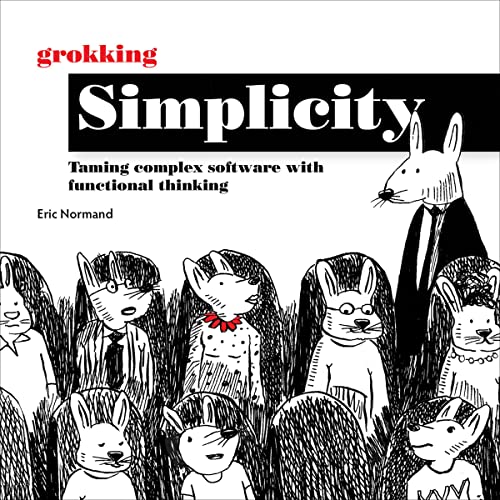 Grokking Simplicity is a friendly, practical guide that will change the way you approach software design and development.

Distributed across servers, difficult to test, and resistant to modification - modern software is complex. Grokking Simplicity is a friendly, practical guide that will change the way you approach software design and development. It introduces a unique approach to functional programming that explains why certain features of software are prone to complexity, and teaches you the functional techniques you can use to simplify these systems so that they’re easier to test and debug.

Developers rightly fear the unintended complexity that infects most code. This audiobook shows you how to write software that keeps complexity close to its inherent minimum. As you write software you should distinguish between code that alters your system’s state, and code that does not. Once you learn to make that distinction, you can refactor much of your state-altering “actions” into stateless “calculations”. Your software will be simpler.

The audiobook also teaches you to solve the complex timing bugs that inevitably creep into asynchronous and multithreaded code. In ad­vanced sections of the audiobook you learn how composable abstractions help avoid repeating code and open up new levels of expressivity.

Eric Normand is an expert software developer who has been an influential teacher of functional programming since 2007.

It's not ready for audiobook

it's well explained and lot of concepts are well explained, but to much reference to a code that you can't see make sometimes difficult to understand

Good book, but don't get it on Audible

This is a great book for getting into the "Clojureist's mindset" on how to solve problems, especially because it doesn't insist of the reader learning some LISP or Haskell to do so.

As someone that has absorbed much of this through strange ways (conference talk recordings, blog posts etc.), I'm really grateful that this book exists. Now, I can point others to it instead of handwavingly trying to convey an entire working philosophy.

HOWEVER, the audio format is *TERRIBLE* in Audible. I couldn't find any way to get the reference material in the Audible app, and the narration straight out skips things like examples.

Manning (the publisher) started a *much better* platform with LiveBook+LiveAudio (where this audio comes from). It animates the text you're currently listening to, so it's easy to glance at your phone/tablet/notebook whenever a diagram or the like pops up and e.g. do the dishes most of the time. So, if you want to look into this book, I encourage you to drop a little more money on the LiveAudio version.

@Audible: This applies to all manning LiveAudio books. Your service would be much better for Manning books if one could "register" their Audible copy on the Manning page (similarly to Steam keys for video games).