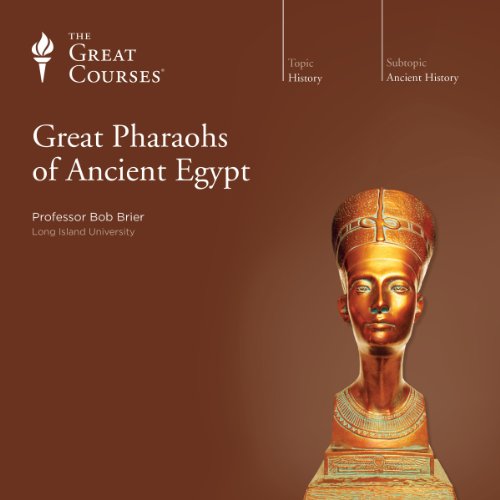 What is it about ancient Egypt that still captures our imaginations? How did it grow from a few villages along the Nile into the greatest power the world had ever seen? Explore these questions and more in these 12 entertaining lectures that tell the stories of the great pharaohs and the daily realities of Egyptian life.

By recounting the lives and accomplishments of the men and women who made Egypt such a captivating civilization, Professor Brier presents a history of ancient Egypt that spans more than 30 centuries and introduces you to the personalities who made Egypt the greatest nation of the ancient world. Among other things, you'll study: The "Narmer Palette," the first historical document, whose images of Narmer's traditions would endure for 3,000 years; Sneferu, who taught Egypt how to perfect the pyramid, a structure whose origins lay in the need to protect desert graves from exposure by the wind; the discovery of Tutankhamen's tomb, which is the most scrutinized episode in the history of Egyptology; and Cleopatra, the enigmatic Grecian ruler who learned Egypt's language and tried to resurrect both the nation's religion and greatness.

Cleopatra's valiant efforts to save Egypt, with the aid of Julius Caesar and, afterward, with Marc Antony, were doomed. Egypt, no longer a nation, would become a Roman province. But the civilization's fascinating story would live on for thousands of years.

Best intro to Egypt. Ever.

Bob Brier is by far the best egyptologist to introduce Egypt and its mysteries.

I will listen it over and over.

Thank you for this precious gift...

It's just an excerpt of History of Ancient Egypt

The entire material is an excerpt from professor's other audible book on History of Ancient Egypt. If you buy the latter, a longer listens indeed, you'll enjoy more and won't miss a single word out of this book.

Bob Brier all day every day...

If you could sum up Great Pharaohs of Ancient Egypt in three words, what would they be?

Bob Brier's got an affable manner and he really knows his stuff, he's a great tale teller, lecturer this is basic introductory material, and should be pretty much de rigueur for anyone who's interested in the Pharaonic timeline. This is a great place to start.

Great narration, one small complaint, the awful trumpeting fanfare they play at the beginning of every 35 minute lecture. Too loud and too raucous, overwrought. I'm laying in bed, not attending a Jousting match.

Otherwise this series is fine.

In this lecture series Professor Bob Brier gives us a history of Egypt by focusing on the life and rule of its rulers. The Pharaohs in this course are the best of the best; a true All-Star Team. Here's the roster:

This one's for the fans!

I really enjoyed this short series on the Pharaohs of Ancient Egypt. Great lecturer. I am going to go right now and download his larger series on the History of Egypt.

Brier knows his subject thoroughly and has the ability to engage the listener with these ancient times in history with fresh vitality. I was left with a sense of kinship to these Egyptian key players and felt only regret that there was no more!?

Taking a Stroll Down the Bank of the Nile

This is a different kind of history, jumping from one Pharaoh to another and skipping decades or centuries in between each one. It is still highly educational if you listen to complement the other Great Courses lectures on Ancient Egypt.

One of the best Great Courses lecturers

Prof. Brier is one of the best of the Great Courses' profs, and this one is true to form. Would be a wonderful introduction to Ancient Egypt for a homeschooler or anyone with even a slight interest.

This is not a comprehensive history - see his History of Ancient Egypt for that - but an engaging look at Ancient Egypt through the lens of its most compelling rulers. Although the "great man" view of history is out of vogue, this is a fun romp through the past, and shouldn't be overlooked for that reason.

I enjoyed listening on my own before bed but am now planning on playing for the whole family on a road trip; good for both types of listening.

The Professor provided 12 Lessons with historial details , facts and his personal opinion and theories

His view of leadership and greatness is frighteningly authoritarian.

His scholarship is competent but occasionally simplistic.

While an interesting listen, comparing it a course like The Other Side of History and its depth I have to say that I'm not entirely impressed.

Listen to it if you love egypt history

Its a great idea. A leading expert tells you about the great pharaos. It is a bit small with 6 to 7 hours (so only four stars for history). But it is well made. The Professor has a nice voice, is full of enthusiasm and makes it great to listen.