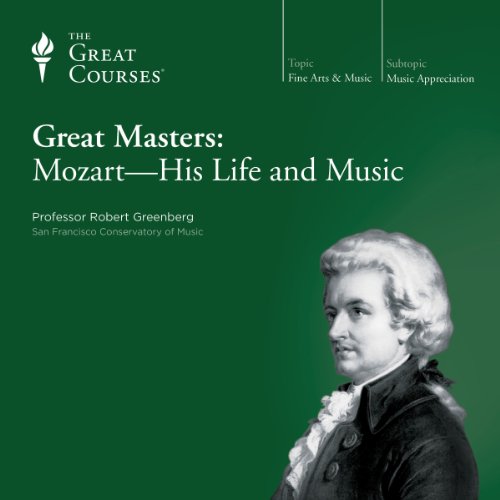 Even from the perspective of time, it is nearly impossible to grasp the full contribution made to music by Wolfgang Amadeus Mozart in his brief and glorious life. He composed his first symphony at the age of 8 and reached full artistic maturity by the time he was only 20. And when he died at the age of 35, he left a legacy of more than 600 works of brilliance - symphonies, chamber music, operas, and more - most composed during an incredibly productive 20-year period.

But even though it can well take a lifetime to fully grasp the achievement of the man described by Rossini as "the only composer who had as much knowledge as genius and as much genius as knowledge", every step of that journey toward understanding will be a joy - one you can begin with this fascinating eight-lecture series, which can serve as both a stand-alone introduction to this extraordinary composer or as the gateway to a lifetime of appreciation and pleasure.

Beginning with an examination of the many myths that surround Mozart to this day, Professor Greenberg offers not only an understanding of his music, but also a realistic view of Mozart the boy and man, from his emergence as youthful prodigy to his posthumous deification.You'll learn about his difficult and ultimately doomed relationship with his father, his troubled marriage, his relationships with luminaries like Haydn, Emperor Joseph II, and his operatic librettist, Lorenzo da Ponte, and the triumphs and disappointments that marked his career - including the astonishing and inexplicable creative recovery that enabled him to create his great Masonic opera, The Magic Flute, only months before his death.

One of the Professors You Wish You'd Had

Professor Greenberg's lecture delivery is as informative as it is entertaining. He covers the basics of Mozart's life, addressing many common misconceptions. The lecture isn't technical in terms of music by any means, but does give clear examples of the material described. I imagine the video lectures of this series would have been better, but as I listen to most audiobooks in the car or while at work, this is the next best thing. If you are fan of classical (concert) music, and enjoy lectures that are very conversational, then this will suit you just fine.

Fantastic summary of this amazing composer.

What did you love best about Great Masters: Mozart - His Life and Music?

Unedited, unsugar coated, and as it was summary of his life. Very eye opening and it makes me appreciate his music so much more.

Would you listen to Great Masters: Mozart - His Life and Music again? Why?

Yes...it is a fascinating biography...although I loved the film AMADEUS, this tells the truth versus the fiction and clarifies where Mozart fits into an evolving art form in the context of world history.

The development of the genius of Mozart in the context of the times in which he lived.

What about Professor Robert Greenberg’s performance did you like?

His zest for srorytelling and light humor.

Good material. Presentation a bit over the top

I liked what I learned about Mozart. Most interesting material. I would have liked Professor Greenberg to dial back his presentation about 30%.

He seems to be "chewing the scenery" in his apparent desire to bring the characters to life ... and to make his points. I was particularly distracted and often put off by his tendency to dramatize the reading of Mozart's correspondence - both from him and to him - in such a way as to almost make caricatures of the writers. It bordered on childish. There were many letters he read that I thought, had he read them rather than "performed" them, the meanings might not have been what he seemed to want us to believe they were.

Overall, I'm glad I listened to this course and will likely listen to others from Greenberg on the Great Masters, but this was a bit disappointing.

After having listened to Dr. Greenberg's course on the Thirty Greatest Orchestra Works, I had to have more, and decided to give this one a try. Although I have always had a great appreciation for the music of Mozart and truly love many of the things he has written, I can’t say that he has been one of my all time favorite composers. With the insights I gained from this Great Courses class taught by Dr. Robert Greenberg, I must say the great genius has moved up in my estimation. My understanding of his music is markedly better, and I can now say he truly is one of my favorite composers. The world lost him way too soon at the age of nearly 36, but thank goodness for the things he was able to give us.

It whet my appetite for more

Would you consider the audio edition of Great Masters: Mozart - His Life and Music to be better than the print version?

Learning how Mozart had to disconnect from his overbearing father, whom he loved.

This was my first Great Course recording and certainly won't be my last. Greenberg, despite occasional over the top dramatics, is an excellent and enthusiastic scholar, musician and lecturer. The breadth of his knowledge and the selections of Mozart's music and a few of his contemporaries, was just enough to completely whet my appetite for more. As an historian, I appreciated his insistence on going to original sources for his information instead of relying on what other music scholars may have written or posited. There was nothing dry or boring in those sources he quoted. No, quite the contrary. They were often entertaining and always enlightening. Mozart had quite the scatological sense of humor.

For example, Professor Greenberg took great pains to debunk the commonly held [often thanks to movies …I'm talking about you, Amadeus ...] notion that Mozart was some kind of idiot savant. Far from it, while he had his share of "issues", he generally functioned and engaged well in society and enjoyed much success. He was a tireless worker, churning out genius music at a prodigious rate, even when unwell or also working nearly full time as a performer, producer, teacher, husband and father. He was a one of a kind prodigy, which of course means he was/is often misunderstood.

This is not an exhaustive course, with just 8 45+minute lectures, punctuated with snippets of music to illustrate his points, but it was enlightening enough to be riveting. I love listening to classical music but like so many, my appreciation and understanding has been somewhat lacking. Now, I feel enriched enough to listen to Mozart with more appreciation.

Superb narration of the life and music of Mozart

Mozart is one of my all time favorite composers. I already knew the basic facts of his life, but this audiobook made everything so much more clear and introduced me to aspects of his music that I hadn't understood. The narrator/lecturer is very well informed and is a most entertaining speaker. Mozart's music is interspersed between sections of the narrative. Highly recommended to novices and Mozart aficionados alike!

Robert Greenberg's Great Masters are the BEST "Great Courses" lectures that I have heard until now. I loved Beethoven's courses and I loved Tchaikovsky's as well. Mozart's biography is great also. Greenberg's style is unique: he speaks full of passion, the characters are well painted, the music is properly inserted. He retells with music the history of Mozart's life, his torments, and greatness.
Robert Greenberg's lectures are as entertaining as educational. Listen to them. You won't regret!

Dr Greenberg is excellent, as usual. I never tire of listening to him. This has to be the ultimate Mozart biography.

For the genius of Mozart, this lecture series was a wonderful introduction. I listened, learned, laughed, ached and cried. A wealth of information that will keep you entertained until the end - perhaps like myself, you'll start listening to everything Mozart again.