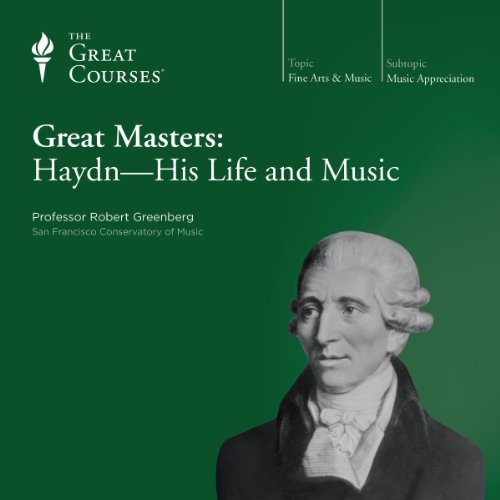 Almost from the moment it was first set to paper, the music of Franz Joseph Haydn (1732-1809) - technically superb, rich in quality, and widely imitated - has exemplified the Classical style, creating not only the Classical-era symphony but setting the standard, through his own 68 string quartets, against which that form has ever after been judged.

And yet Haydn, despite the influence left by more than 1,000 works, seems to no longer get his due, often thought of as an aged figure surpassed and overshadowed by Beethoven and Mozart, who actually credited Haydn, the only contemporary he admired, and with whom he formed a lasting and artistically fruitful friendship, with teaching him how to write string quartets. Even Beethoven, whose relationship with his compositional teacher was troubled and stormy, would never have been able to write his triumphant Ninth Symphony without the influence of Haydn's crowning achievement, the towering 1798 oratorio, Creation.

Now, in a series of eight vivid lectures, you can learn to understand and appreciate the music of one of the most original and influential composers of all time as you explore his origins, influence, and greatest works.

Another masterpiece from Greenberg

The narrator makes this great. He varies his pace, foreshadows, goes on occasional rants and just makes this biography very entertaining. I have listened to his long form courses. this is a great sample for someone who wants to try him out.

What made the experience of listening to Great Masters: Haydn - His Life and Music the most enjoyable?

Robert Greenberg's knowledge of music form and in depth information of Haydn's life. The discription of how a piece was written and how it related to events in the composers life.

What was one of the most memorable moments of Great Masters: Haydn - His Life and Music?

Haydn's relationship with other composer's, Mozart and Beethoven.
Why is it that composers have messed up love lifes and seem to chase the wrong women?
Brhams, Haydn, Tchaikovsky

Have you listened to any of Professor Robert Greenberg’s other performances before? How does this one compare?

This is my forth composer lecture of the series and I have three more to listen to. All have been very informative and inspiring.

Order these lectures today they are inexpensive, Then go buy some great music you can't go wrong.

Professor Greenberg is animated and erudite. I love both his serious side and his irrepressible humorous side. I have many of his courses in my Audible library, and whenever I finish one, I'm on to the next. Looking forward to queuing up the next one right now!

I loved every moment of this audio book! Recommended, especially if youre interested in music history.

This is among the best of these classical music courses. Greenberg is a huge personality, enthusiastic and not for everyone. But he is easier to follow on audio than video, at least for me.

It does bother me that the sound quality of the music in these presentations is generally poor and almost always monophonic. After all, the music is polyphonic.

Great, as all the great music courses by Professor Greenberg.
He delivers and transmits his wisdom and passion.

R G arrogant, pretentious, sloppy, tries to be cute, is misleading. R G seems to presume that his audience is ignorant adolescents, and instead of edifying he patronizes.