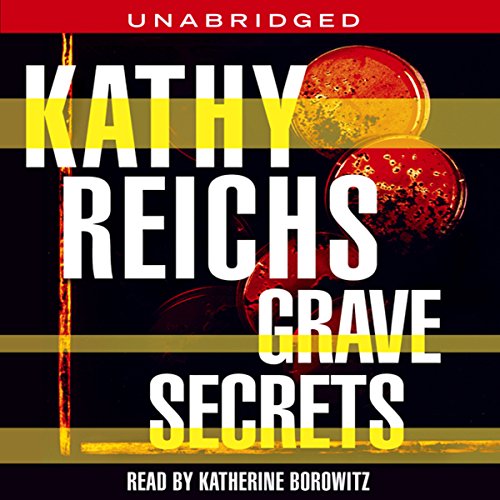 It was a summer morning in 1982 when soldiers ravaged the village of Chupan Ya, raping and killing women and children. Twenty-three victims are said to lie in the well where Dr. Temperance Brennan and a team from the Guatemalan Forensic Anthropology Foundation now dig. No records were kept. To their families, the dead are "the disappeared."

The team is packing up for the day when an urgent satellite call comes in. Two colleagues are under attack. Shots ring out, and Tempe listens in horror to a woman's screams. Then there is silence. Dead silence.

With this new violence, Tempe is asked by the Guatemalan police for her expertise on another case. Four privileged young women have vanished from Guatemala City in recent months. One is the Canadian ambassador's daughter. Some remains have turned up in a septic tank. Unfortunately, Tempe knows septic tanks.

From cutting-edge science in the lab, where Tempe studies fetal bones and cat hair DNA, to a chilling encounter in a lonely morgue, Grave Secrets is powerful entertainment from a crime fiction superstar who combines riveting authenticity with witty, elegant prose.

"The author keeps the twists coming, and by the novel's climax, she has skillfully interwoven her many subplots and red herrings into a satisfying puddle of sex, sleaze, greed and gore." ( Publishers Weekly)
"One of [crime fiction's] more complex and interesting protagonists." ( Amazon.com)

Cathy Reichs is a master of suspense and this book is no exception. For some reason, however, her quippy metaphors become a bit tedious in this book. The narrator's voice is somewhat muffled and while she adopts different "voices" masterfully, her narration has a rather flat affect. While this book is touted as "unabridged" - at the end of the work, the narrator reads that it was abridged for this format. There do seem to be a few details that do not get "tied up" at the end. Overall, it is a good "listen" but a little disappointing if you are accustomed to some of this author's other works.

Anything by Reichs is a great read, but this latest in her Temperance Brennan series is even more enjoyable in the way she brings her characters to life. Reichs tells not only a great story, but forces us to take a look at the seemier side of politics and the fascinating world of forensics while involving her readers in the life of the main character, Brennen. I am waiting impatiently for the next books to show up here in Audible!

The greatest listen is always a partnership. Reichs tells a terrific tale that Katherine Borowitz brings to life. This is one of those books that kept me sitting in the car just to hear another sentence or two.

I like K Reichs books and this is my first audio. The story line is interesting and believable, but now that I think about it, I really enjoyed the narrator. She made Tempe Brennan come alive and gave her some personality. In any event, I like Reichs and I enjoyed this audio.

This my second Tempe Brennan book, and I like them. The female protagonist, complete with her tangled, complex love affairs works well. The use of both French and Spanish, along with the view of contemporary Canada adds a little international spice to the mix.

The author does a good job of mixing in historical and technical information about forensics and modern biology, which is welcome.

My one complaint is the anti-NRA diatribe which is stuffed into the early part of the book. I normally allow authors to use their work to promote their political views, but this one is so clumsily done and blatantly obvious that I must object. It feels as if a cut-and-paste from an anti-NRA website was stuffed into the novel, paradoxically right after a scene where the good guys might not have been harmed had they been armed. It just didn't work.

The book is well worth your time: history, travel, romance, and mystery, all in a generally well-written package.

Well worth a listen

Tempe Brennan is a character with a sharp mind and a sharp tongue. Some of her wise cracks made me laugh out loud. The story was interesting but could have been "fuller" (sometimes it seems like things that list as unabridged have been condensed)

Much better than expected!

This was my first Kathy Reichs book, and given other reviewers' comments I was braced for a gross disappointment that never came. I should know by now that the longer reviews of books one normally finds are sour in nitpicky ways, regarding either an author's style or that of the narrator.

I enjoyed Reichs' writing. The lengthy descriptions of people and places painted vivid scenes. Her clever use of metaphors and turns of phrase often had me laughing out loud. Also, the sarcasm among the characters was delicious. There were some gaps in background story here and there, but I easily ascribed it to this being my first read of her series, of which this is the fifth. (I started here because it's the earliest of her books on audio that is unabridged.)

A narrator can make or break a book. One reviewer here was right in suggesting that an author should approve one before the project proceeds. This narrator was pretty good. She has some flat moments here and there, but on the whole she gave life to the characters and was pleasant to listen to.

I'm off to download the next unabridged Reichs book, Bare Bones. Reviewers trashed it, more the narrator than the book itself, but I'll just have to see.

Anti-gun propaganda ruined it for me.

If I want to hear ANTI-NRA rhetoric I will watch CNN and MSNBC. I listen to books for entertainment, not to be lectured to about my constitutional rights. Last of her books I will be buying.

I am disappointed only that the first few books in the series are not available in audio form.
The book is well written. I enjoyed the internal monolog that adds depth to tempi.
The reader is not perfect but IMO is not actually bad. I did not have problems following transitions between characters etc.

recording a little low and washed

Great Story, amazing narrator. Audio mixing and sound quality pretty poor. This production does a disservice to the narrator and author.