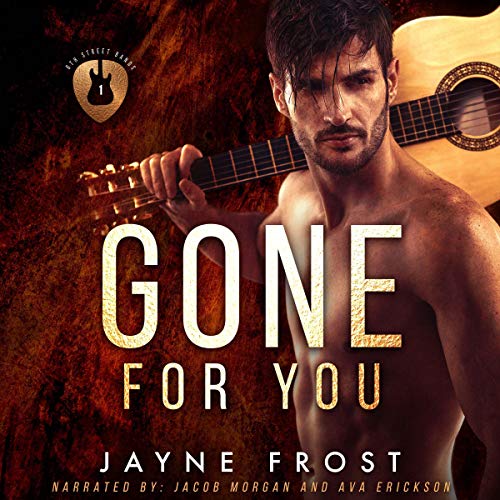 Gone for You: A Rock Star Romance:

He’s a sexy rock star with a few days to kill. And he’s got his sights set on me.

Struggling artist Lily Tennison only has a few months before she can quit her job at Austin’s most luxurious resort and pursue her true passion. Painting.

But when Cameron Knight, the sexy as sin guitarist for the band Caged, needs a place to hide out from the press for a few days, Lily’s entire world turns upside down.

Dangerous. Sexy. Wild. Cam is everything Lily shouldn’t want. Not to mention, a fling with a musician might just be the one thing that severs her relationship with her family for good.

Cameron loves his life. His freedom. His music. When it comes to women, there's no such thing as a repeat performance. But one night with the gorgeous blonde has him bending the rules.

Lily wants a taste of something forbidden.

Cameron wants to give it to her.

They've only got four days.

So what could it hurt?

Gone For You is a light hearted introduction to Jayne Frost's angsty rock star romance series, The Sixth Street Bands, each book in the series features recurring characters, but can be read/listened to as a standalone. No cliffhangers.

This was just a great contemporary love story with great characters, awesome narrators and just enough sexiness . There's always a parent in these romances you want to strangle but this series is great and simple and enjoyable. Jacob and Ava are top notch!! Thank you Jayne Frost. ❤❤⭐⭐❤❤

Jayne Frost is my favorite rock star author for good reason. Gone For You is a multifaceted gem. The chemistry between Lily and Cam was so realistic. The storyline pulled me in and had me smiling, laughing, and wanting to yell at a few characters. I thought that Jacob Morgan and Ava Erickson were magical bringing the characters to life. They each were flawless, and together perfect. Their portrayal of Lily and Cam was incredible. I love how this book set the beginnings for the other Sixth Street Band stories. It is a lighter listen, but the characters have depth and grit and determination. Loved this is a standalone listen. I definitely will listen to more books by this amazing author and narrators,

Great story and just in love anything Jacob Morga!

Jayne Frost is one of those authors that I know when I start the book, I will have a great listen. This first book in her SIxth Street Bands series sweet, sensual and just a feel good romance. Cameron Knight is the guitarist for Caged, an up and coming band. When his bandmate is injured, they go to a hotel for anonymity. When he meets the concierge, he is smitten. Lilly is biding her time, earning money to go to school and do what she truly loves. Painting. This chance meeting with Cameron is not what she is looking for, but the chemistry is hot, and the temptation to do something wild is too much. But can these two keep it casual? This is such a sweet, warm story. I love Jayne's writing. She gives each character so much, I feel like I know them. Cameron is reckless, yet grounded. Lilly is strong and fiercely loyal. I love that she gives Lilly that extra punch by not letting a slight disability pull her down and Cameron the brains to know it does not define her. It's a true love story, sure to pull you into this series. It's amazing!

Narration is incredible. As always, these two are consummate professionals, giving each character exactly the personality and feel I anticipate. Ava Erickson tunes into her characters and makes them hers and Zachary Webber is perfectly cast for rock bands. Together, they bring this one to life.

I've been waiting for this one!

I've read the entire series, but nothing compares to hearing it on audio. Jacob Morgan slayed as Cameron Knight, the easy going rockstar with the heart of gold. Ava Erickson was the perfect Lily right down to the character's cute stammer. This story is much lighter than Jayne's other rocker romances, but I loved it so much! Such a great story to introduce the boys from Sixth!

I absolutely love this!

Love the narrators, love the characters, love the story! I really enjoy this so much looking forward to the next book in the series. Only downside is it’s short read.

If you’re a fan of rock group romance like I am you’re going to enjoy this book because the larger than life personalities of the members of the rock band, Caged, guarantee an entertaining read. These long time friends have each others’ backs through thick and thin, but they can’t resist talking trash and bragging about their attributes and their outstanding performances, whether they’re on or off the stage. Great characters and a steamy romance makes this adventure a winner in my book and the narration performances of Ava Erickson and Jacob Morgan are outstanding.

Not my cup of tea friends! This was a bit immature - great for a high school girl!

I greatly enjoyed this sexy, angsty love story! It hit me with all the feels...sigh