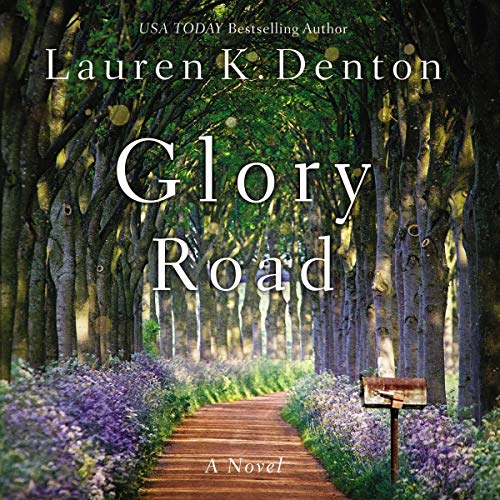 One summer changes everything for these three Southern women.

As three generations of women navigate the uncertain paths of their hearts and futures, one summer promises to bring change - whether they’re ready for it or not.

At 38, garden shop owner Jessie McBride thinks her chances for romance are years behind her, and after her failed marriage, she’s fine with that. She lives contentedly with her fiery mother and her quiet, headstrong daughter. But the unexpected arrival of two men on Glory Road make her question if she’s really happy with the status quo. Handsome, wealthy Sumner Tate asks her to arrange flowers for his daughter’s wedding, and Jessie finds herself drawn to his continued attention. And Ben Bradley, her lingering what-could-have-been from high school days who’s known her better than anyone and whom she hasn’t seen in years, moves back to the red dirt road. Jessie finds her heart being pulled in directions she never expected.

Meanwhile, Jessie’s 14-year-old daughter, Evan, is approaching the start of high school and trying to navigate a new world of identity and emotions - particularly as they relate to the cute new guy who’s moved in just down the road. At the same time, Jessie’s mother, Gus, increasingly finds herself forgetful and faces a potentially frightening future.

For these three strong Southern women, the roots they’ve planted on Glory Road will give life to the adventures waiting just around the curve.

"Brims with family, second chances, and new horizons." (Lisa Wingate, New York Times best-selling author of Before We Were Yours)

"Rich colorful characters capturing my heart, combined with a story that kept me up till the wee hours, Glory Road is a perfect read. Lauren Denton has done it again!" (Lisa Patton, best-selling author of Rush and Whistlin’ Dixie in a Nor’easter)

"Once again Lauren Denton brings her lyrical writing and compelling characters to a story that will enthrall readers from page one." (Marybeth Mayhew Whalen, author of Only Ever Her and co-founder of She Reads, for Glory Road)

"A poignant and heartfelt tale of sisterhood, motherhood, and marriage, Hurricane Season deftly examines the role that coming to terms with the past plays in creating a hopeful future. Readers will devour this story of the hurricanes - both literal and figurative - that shape our lives." (Kristy Woodson Harvey, national bestselling author of Slightly South of Simple)

As a lifelong Southerner, I found the author's accent and cadence to be authentic, and the pace of the story was smooth and even. This is not an edge-of-your-seat story or a gripping mystery, but it's a bit of a mature romance and explores the relationship between mother - daughter - grandmother. I appreciate that there is no drama or angst or conflict between the generations, but respect, maturity and love. The characters appear to have been brought up in the old fashioned way of being gentle, polite and respectful to others, especially to their parents. It was a refreshing change of pace from the modern day world and took me back to my childhood and youth when you treated others with manners and respect, a la Mayberry, Andy and Aunt Bea. I also appreciate the lack of lurid sex and profanity. The story is strong enough to stand without it.

First book I didn't have to return in a long time

No violence so far, good story, I want stories without sex and violence and sadness. Good author and narrator.

There was a lot to like about this book. It was well-written and each character had their own voice/story. I wanted the best for each of them. It felt realistic and made me think of my childhood on the farm.

Endearing and detailed. Makes you feel like you’re part of the family in the story.

This is an exceptionally good novel by Lauren K Denton. Her best yet.
All her books feature likable down to earth characters and complex plots .
I have listened to all the books offered by audible. Loved every one. The narration was perfect!
I will look for more books narrated by Devon O'Day . Looking forward to the next Denton novel!

This was a cute book and I loved the gardening tips given with each chapter.

A delight for anyone who enjoys flowers, gardening, romance in a lovely contemporary Southern setting.

Not favorite by this author.

Predictable, same old story. The narrator wasn't able to perform the voice of the 14 year old. It sounded just like the main character, the mother.
it got confusing and made it unconvincing. The other voices were okay.
I did like the gardening tips at the beginning of each chapter.

I love Lauren Denton. I love her southern charm. And her "Realness" to the stories. I know that not a word. But I love how she brings real life events to her books. I'm about to start The Summer House. And I can't wait. Keep doing your thAng, Lauren. We love you. ❤️🙋‍♀️

I enjoyed reading about the three generations in this family and their joys and challenges. How age changes us in many ways and yet we are all looking for love and acceptance. The love these three women have for each other beautiful.