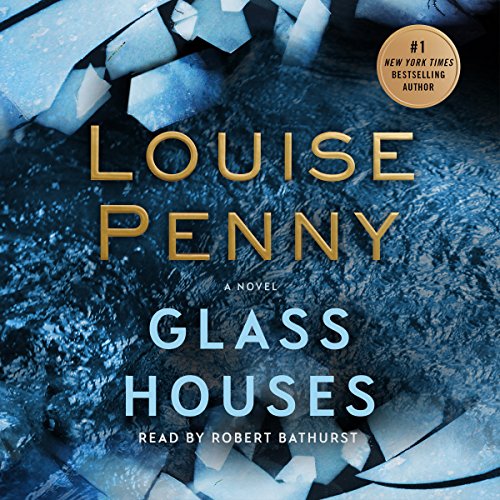 "...the events in Glass House challenge Gamache's conscience unlike any of the previous audiobooks, with Bathurst prying open the hero's heart and soul and laying it bare for listeners to experience at a visceral level." — Audiofile Magazine

When a mysterious figure appears in Three Pines one cold November day, Armand Gamache and the rest of the villagers are at first curious. Then wary. Through rain and sleet, the figure stands unmoving, staring ahead.

From the moment its shadow falls over the village, Gamache, now Chief Superintendent of the Sûreté du Québec, suspects the creature has deep roots and a dark purpose. Yet he does nothing. What can he do? Only watch and wait. And hope his mounting fears are not realized.

But when the figure vanishes overnight and a body is discovered, it falls to Gamache to discover if a debt has been paid or levied.

Months later, on a steamy July day as the trial for the accused begins in Montréal, Chief Superintendent Gamache continues to struggle with actions he set in motion that bitter November, from which there is no going back. More than the accused is on trial. Gamache’s own conscience is standing in judgment.

In Glass Houses, her latest utterly gripping audiobook, number-one New York Times bestselling author Louise Penny shatters the conventions of the crime novel to explore what Gandhi called the court of conscience. A court that supersedes all others.

Not my favorite Penny

Penny usually wins for being deeply specific, both for place and character. In this story the places were the usual parts of 3 Pines with little of it really coming to life, and even the church root cellar (the new discovery) somehow failed to seem really present or interesting. The bistro, though mentioned a lot, never sprang to life for me as it usually does, when I feel I was actually there the night before, observing all the trivial realities of the place and its many visitors and the food.
And the group around whom the story is woven, the politician and her friends, remained indistinguishable and murky. I couldn't tell you what a one of them looked like and cannot recall any of their names. Such a sad contrast to previous books where featured characters have stepped out of the pages and become so familiar and fascinating. Cici for one.

I really did not like this one very much despite a central, interesting premise. It all felt shallow and cursory. And the Gamache /Jean-Guy relationship felt like a completely predictable repetition of the previous books, despite Jean-Guy's gaining of maturity and a spare tyre. I also missed, outside of the Ruth Zardo scenes, any humor, and usually I'm laughing out loud while wiping away a tear. Oh well. No path is all smooth. Will certainly try another in the series if one comes along.

And as a PS: I agree with all the Canadians who can't fathom why our British Bathurst is preferred to a Candian reader/actor. Having the right accents and syntax would make the world of difference.

The Balm Of Community

I enjoyed this entry in Louise Penny's Canadian village of Three Pines Police Procedural series. Penny was able to advance the recurring characters nicely and even added to their depth and connection within the community and the series at large. If anything, this entry offered a gentler kinder take on these quirky and often odd people. At times I think this series tips over the edge of strange behavior, but this book, while a bit long, felt more balanced and evenhanded.

Bathurst did a great job with the narration. It has been a transition switching to a new narrator mid-series but I think he has pulled it off beautifully.

Recommended if you are a fan of Three Pines. If you are new to the series definitely start with book one as each book builds on the last.

Author Louise Penny is a treasure. Glass Houses is the 13th novel in the Chief Inspector Armand Gamache/Three Pines police procedural series and it may be the best so far. I have read or listened to all 13 and Glass Houses presents the first time Armand Gamache has faced the ethical dilemma of whether to do what is moral although it is illegal. Although there is a murder to be solved Glass Houses is really about the devastation and deaths caused by recreational opiates such as heroine and fentanyl in Quebec as well as in Vermont. (Vermont has the worst drug issue of any US state as measured both by percentage of residents using recreational opiates and opiate deaths as percentage of the population.) Gamache and his team go after and shut down many of the recreational opiate users using a unique and illegal method. Glass Houses is also the most violent novel in the series.

The first ten novels in the series were narrated by the great British-American actor Ralph Cosham who died very soon before the release of Book 10, The Long Way Home. British actor Robert Bathurst has narrated the most recent three Three Pines novels. After the release of those three there are always some Audible listeners who complain about Bathurst. Bathurst does a very good job, and since Ralph Cosham cannot narrate from the grave we need to get accustomed to it.

There are two very worthwhile additions after the end of the novel. The first are some comments by Louise Penny and the other is an interview of Penny by narrator Bathurst.

I love Louise Penny's novels and characters. All of them have my highest possible recommendation.

For most of the Three Pines series the characters and village overpower really good mysteries. (This is not criticism, because every book in the series features great mysteries and equally clever police work.) Glass Houses breaks the trend with the mystery unfolding, after the fact, in the trial of the murder. It is clever storytelling at its best.

Inspector Gamache is now the head of Montreal police. This is another place Penny shines, by exposing Gamache's genius and discipline in police politics and investigation above his personality. We know from past novels he does not covet power. For the first time we are exposed to just how cunning and brilliant he is by how he runs the police force.

A good murder mystery, a better police story, Glass House stands out as my favorite novel in the series. It is an extraordinary work.

The structure of this book is very well done.
The story however was one of the weakest of the series. I didn't believe it for one second. The murderer was for once easily guessed. I thought about skipping chapters at time though I didn't. I didn't like the story and i think it was a bit too much for three pines. Will put higher expectations in the next book.

What disappointed you about Glass Houses?

Glass Houses was a disappointment (even aggravating) for the same reasons as the last three or so by the same author, beginning with The Brutal Telling.

Would you recommend Glass Houses to your friends? Why or why not?

I always recommend Louise Penny, but I would recommend that a reader new to her work start with the first book and read them in order. I would definitely not recommend starting with Glass Houses or any of the last three. For some time I have felt that the wonderful characters, their interactions and vivid, distinctive dialogue has been upstaged by an emphasis on large-scale corruption, the intricate setting of police traps for the bad guys, etc. The author's research on often-arcane subjects has figured in the books for a long time; interesting enough, but between it and the cops-and- robbers machinations, the whole feels strained, over-plotted and somehow anonymous.

Which character – as performed by Robert Bathurst – was your favorite?

Ruth and her duck Rosa. Beauvoir.

When first audio-reading these books (one after the other), I felt that life in Three Pines was a river that flowed somewhere, had always flowed -- notwithstanding tragedy and the unexpected-- and would keep on flowing, whether we were there (so to speak) or not. I remain an admirer. May Louise Penny and Three Pines flow on.

Not her best work

I'm a big fan of Louise Penny and her three pines stories. She starts with an interesting premise in this story but it was disappointing. Not a realistic story and our favorite Inspector is disappointing. It may have been written at a bad time for her but it seemed like a number of passages were repeated too often. Confusing time frame as well. I'm still a fan and will come back for more.

Wish I believed that those in positions of responsibility in the police and government were always as self-analytical as Armand Gamache. His tendency to agonize at length over all possible human consequences of policy and procedure decisions is unearthly - and probably extremely unlikelyl.

So, once again, Gamache is just a tad too honorable and heroic to be true. The action, however, moves this book along quickly, and there's plenty of suspense and uncertainty. The wonderful people of Louise Penny's Three Pines are around, too, and that is always welcome in this series.

A welcoming bistro, drug cartels, a dog that might actually be a pig, deadly chases through the woods, and a crazed poet with a duck - who could resist? Anyone who is a fan of earlier books should enjoy this return to Three Pines.

I have read all 13 of her books and had the privilege to hear her in person. She never fails to deliver: A great storyline, endearing characters, and mystery to the end.

Louise Penny is a Brilliant Writer

I have thoroughly enjoyed the Louise Penny books and love the main characters, especially Inspector Gamache. This story is set in Three Pines and has drug smuggling as the main topic, but you will be fascinated by the history on the Spanish cobradors that is woven into the story. I won't spoil the surprise, but this topic had me searching the internet for more information. The only reason I didn't give 5 stars is that there are better books in this series.

The ending is dark and while it covers all the loose ends for the mystery, there are some unknowns about the main characters that will have to be resolved in the next book. I did not guess the murderer, but found it very believable. I could have figured it out with the clues provided. I am amused for not being more clever, but that is the fun of reading a whodunit.

After the story is complete, be sure to listen to the interview with Louise Penny. It was very informative as she talked about her life and inspiration for this story.

it keeps you wandering, until the end. and it has a message for us all, something to reflect upon.

Another winner! Just could not put down.

I absolutely loved this book. A new twist and a thoroughly enjoyable and gripping Gamache. I so love these characters and love how they can continue to surprise and develop even in the thirteenth book.
Well done, Louise, and a big THANK YOU from a very satisfied reader and fan.