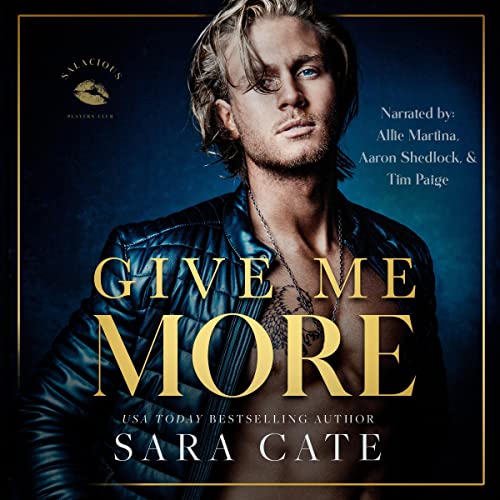 I’m a scoundrel. Playboy. Basically, I get around, and I’m not afraid to admit it. So when my best friend opens up Salacious Players’ Club and asks me to head the construction, how could I say no?

Now we’re on a cross-country road trip touring other kink clubs, and I couldn’t be happier. Life is good.

These are the two most important people in my life, and if we go down this path, how will I ever be able to walk away?

I’m not sure my best friend understands just how much I’m willing to do for him—and why.

I listen to a lot of audiobooks and I did read Give Me More when it released. but this audio book has now become my favorite audiobook. The trio of narrators we're perfect and captured all the inflections and emotions with there voices. Worth the Credit and highly recommend

So much more than just a smutty romance. While this story begins like the others with a member of SPC exploring their fantasies, this story morphes in a journey of self-acceptance, empowerment, and love.

I knew right away this was going to be a special book. The characters are people I’d want to be friends with, the story is beautiful, the setting is fun and the conflict is…well, perfect.
I didn’t think anything would top Praise in this series but this book actually did it. (Eyes on Me was fabulous also but the narration spoiled it for me)
The narration in this book was marvelous. Each actor did an excellent job. There is nothing I can say except…perfection.
I know…I’m being redundant but that’s the only word that pops into my head.
I wish I could listen again for the first time. It was that good.
Creditworthy? Absolutely! I’d give it a million stars if I could. ✨🌟✨

Give Me More was such a good book in the Salacious Players Club series and I thoroughly enjoyed the storyline of this one. Praise is my #1 book so far in the series, but this one is a very close second! Also, the audiobook narration was on point and the narrators were perfect choices for the characters. I can’t wait to read the next book in the series by Sara Cate! The narrators Aaron Shedlock and Allie Martina are absolutely going on my favorites list for future narrators to look for books with when I'm picking my next read/listen.

Sara Cate continues to blow me away with another brilliant story set in her “Salacious Players’ Club” series, and she raised the heat level to scorching hot. This is the third book of the series and my second one, I need to get the one I missed pronto, but back to the point, this book stands on its own, so if you are new to the series you will not feel lost or like you missed something because everything you need to know is in included in the descriptive details. Each book in this series features one of the four owners of the players’ club as one of the lead characters, and this book is Hunter’s story and what a story it is. Sure Cate is one of my favorite authors, I love her writing style and the characters and storylines she creates, and this is my tenth audiobook listen of hers and it is one of her best books yet. OK, maybe I said that before about her other books, but she really outdid herself with this book, you can feel the emotions pouring off the page. The complexity of the characters and the dynamics between them is phenomenal, as is the character growth and development, including their relationship. Hunter and Isabel are happily married, adventurous in the bedroom. It was always just them, but minds do occasionally wander, innocent thoughts, deepest desires never to be acted upon. Hunter’s best friend, Drake, did the construction for their club, and since the partners of the club are looking to open other locations, Hunter asks Drake to join him and Isobel to scope out the other places. Hunter realizes Drake has always been a part of his relationship in a friendship kind of way, but after hearing about a fetish, he thinks it is something he wants to bring into his marriage. Isobel and Drake are resistant at first, but they both love Hunter and want to give him what he wants. Will this ruin his marriage, his friendship with his best friend or him when he can not come to grips and his inner demons get the best of him? This book is just as much Drake and Isabel’s story, but Hunter is the one with the most obstacles to overcome. I loved how everything played out in this book, there are many layers to this brilliantly plotted story, lots of drama, heartfelt emotions, a touch of angst, well-written scenes and sexy times, and a trifecta of a romance. Sara Cate, thank you for another exceptional story and emotional rollercoaster ride.

🎧📚🎧 And for the exceptional narration, Sara Cate cast the perfect narrators to bring her characters and story to life. Allie Martina, Aaron Shedlock and Tim Paige are superbly talented narrators and versatile voice artists. They had a complete understanding of the characters they were portraying, gave each a voice that fit their character’s persona, I loved they took each role and made it their own, sounding natural and believable in the roles they were playing, as if they were that character. You could hear how much heart they put into their work as they captured all the character’s emotions and their passion and projected it into their performance, having you feel every single one. These entertaining storytellers are a pleasure to listen to and their narration enhances an already brilliant story to another level. Thank you for another amazing listen.

Really great narration and the story is actually really sweet amidst all the steam. Liked it a lot, best so far in the series.

I love trouples. the dynamic of the characters really jump out and the voice actors are finaminal.

Not sure if I read the summary of the book well or what but I really enjoyed this story, it was a suck great relationships that was relatable and surprisingly understandable loved this book all the way around!

So boring!! Don’t waste a credit

Don’t waste a credit! So boring. Terrible narration! Literally no plot and boring sex for owners of a sex club.

This series just gets better and better. TL Swan is just killing it . Love, angst, friendship, curiosity, and plenty of spice. Can’t wait for book 4