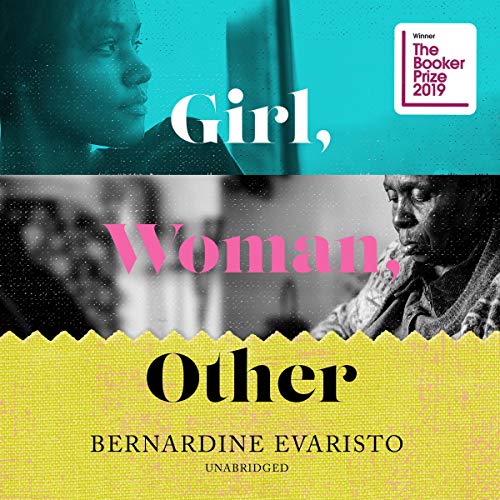 From one of Britain's most celebrated writers of color, Girl, Woman, Other is a magnificent portrayal of the intersections of identity and a moving and hopeful story of an interconnected group of black British women. Winner of the 2019 Booker Prize and short-listed for the Gordon Burn Prize, Girl, Woman, Other paints a vivid portrait of the state of post-Brexit Britain, as well as looking back to the legacy of Britain's colonial history in Africa and the Caribbean.

The 12 central characters of this multi-voiced novel lead vastly different lives: Amma is a newly acclaimed playwright whose work often explores her black lesbian identity; her old friend, Shirley, is a teacher, jaded after decades of work in London's funding-deprived schools; Carole, one of Shirley's former students, is a successful investment banker; Carole's mother, Bummi, works as a cleaner and worries about her daughter's lack of rootedness despite her obvious achievements. From a nonbinary social media influencer to a 93-year-old woman living on a farm in Northern England, these unforgettable characters also intersect in shared aspects of their identities, from age to race to sexuality to class.

Sparklingly witty and filled with emotion, centering voices we often see othered, and written in an innovative fast-moving form that borrows technique from poetry, Girl, Woman, Other is a polyphonic and richly textured social novel that shows a side of Britain we rarely see, one that reminds us of all that connects us to our neighbors, even in times when we are encouraged to be split apart.

Although this is a book of short stories, they are so well connected one to another that the book reads like a novel. There are twelve chapters, each featuring a different character. They are all black British women. But other than that they don't have a lot in common. They are of many ages and have a wide variety of jobs. They come from different classes and cultures. Some of them are gay. Some are married. And one has come out as transgender (nonbinary) and no longer identifies as female.

It is a book about diversity and culture, but it never feels like the author is trying to force her political opinions upon the reader. In fact it didn't feel like a book exploring differences, but more one of similarities. How am I and this black, British nonbinary person the same? The story is enjoyable and thought-provoking.

I listened to the book on audio, so I cannot speak to the form of the words on the page. I have read that the form and structure are unique, with sections of the book appearing more like poetry than prose. On the audiobook this doesn't really come through.

A book with 12 black protagonists? Yes, and all of them women? Yes!

This is a smart, smart book. But it reads easily, and quickly. It is warm, funny, compassionate, empathetic. The characters are sometimes confronting, but generally likable. I am very close to 5 stars on this one.

The stories woven together in a very emotionally satisfying ending were good, even though most of the characters are quite mean and cynical to each other.
The voice actor is very good, but with so many characters to keep straight, I might have preferred if the producer chose multiple narrators or the actor chose to make a slight change in vocal style for each. But I know that can backfire if the actor overdoes the accents (such as with “People of the Book”).
A plus: The audio version helped me overcome the idiosyncratic lack of punctuation and standard sentence structure in the print and Kindle version, although I periodically went back to the Kindle version to consider that structure and why the author may have chosen it.

Okay. I get what she was trying to do. We are all connected somehow. Liked the social commentary on gender and race for sure. However, she has wayyyyy too many characters and doesn’t finish off connections which makes it hard to follow and you disconnect. Couldn’t even enjoy the ending cuz I couldn’t remember everything. If you read this, take notes of who is who along the way.

As an African American woman, l love hearing stories of my sisters of the diaspora. This is brilliant writing, weaving these stories into an amazing quilt and the reader was wonderful. Loved it!

The best novel you will listen to this year

This was exceptional. I was transfixed throughout the whole book and wanted it to keep going and going and hear more stories about these women. The writing is just wonderful and the interlacing stories are captivating. It thoroughly deserved to win the Booker Prize and I will come back and re-listen to this again in the future. My dog got some extra long walks as I just wanted to keep listening. I have read or listened to 53 books so far this year and this is the best of them all.

The narration was great but the story was absolutely perfect. I couldn't stop till the end.

This book is a stream of consciousness cross-section through the many layers of British life illustrating how despite our differences in economy, sexuality, geography and class we all ebb and flow against and within each other's lives. Fantastic! Loved London, the political tensions, the growth of these characters through the generations. So riviting.

This is a reader’s dream...storytelling so real, you believe you’re in the room! Excellent

I loved this book. The author’s storytelling was brilliant. I would listen to this book again!

What is this book even about?

I couldn’t get into this at all. Life is too short to waste on this.

I tried. I really did. I couldn’t find an arc anywhere. The characters were boring. The plot never materialized. Everyone was a brat AND uninteresting. I found myself annoyed whenever I listened. Throwing in the towel today.

The story makes you look at life through so many eyes, different perspectives. Beautifully told. Eye opening and nourishing.

I loved this audio book! The power at the author starts to portray one character after another, almost like drawing lines into sand until the first lines cross, and then another one and another one - amazing!

All stories made me feel deeply with with characters, their challenges, hopes, and fates; all while being just short enough to remain fresh, entertaining.