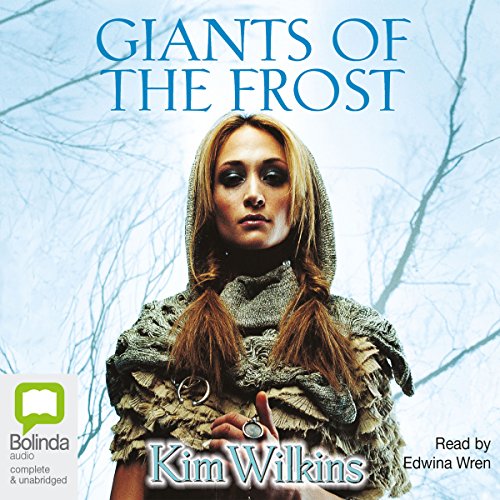 Giants of the Frost

Having established itself as a landmark of contemporary fantasy, Giants of the Frost finds itself a worthy suitor in the haunting strains of performer Edwina Wren - at once forceful and sensuous. After settling in at a remote Norwegian research station, scientist Victoria Scott soon begins to suffer an uncanny sense of déjà vu, followed by nightmarish visions. The source of these disturbances is steeped in centuries-old Pagan religion - its divine workings beyond the grasp of Victoria’s scientific sensibilities.

Wren’s voice-acting style is refreshingly unique and strikingly convincing, as she personifies stuffy Norwegian scientists, coarse yet mystical deities, and the incredulous heroine, chased by ancient demigods. Moreover, Wren’s lilting, ethereal airs heighten the chilling atmospherics and ancient echoes that haunt this tale at every turn.

An epic saga of love, fate and betrayal.

Victoria has chosen career over love, but starts to question this decision when she finds herself working at a remote weather research station on a tiny island off the coast of Norway.

In this world of midnight sunshine, the Old Gods still watch the affairs of humanity - one of them has become fixated on Victoria, certain that she is the reincarnation of a woman he fell in love with over a thousand years before. It was a love affair which threatened the very existence of Asgard.

Dangerous love and desire are soon running out of control, as the spectacularly supernatural obliterates Victoria's refuge in scientific rationalism.

The story is well told, if a bit long, but the main problem that I had with this book is that the ending (without disclosing details) is abrupt and unsatisfactory.
I came away very displeased with it.

I took a chance on this one - fearing it would turn out to be unbearably soppy and clich?d - but I don't regret the credit I spent on it. I enjoyed the story, the mix of the modern and the ancient, of technology and mythology, of the love and the suspense elements. In terms of the story my criticism is the fact that the great love, to me, was just not believable. But that didn't ruin it for me. Much more annoying was the narrator: the voices she gave to the characters (mainly the male characters) did not do it for me at all, and throughout the book I found myself imagining how much more interesting and likable the cast of this story would be were it not for the narration.
This title was enjoyable enough, but I'm sure that reading this book rather than listening to it would be doing yourself a favour.

Epic Tale With A Modern Twist

I really loved this book, more than I expected to. The author blended epic story telling of the old gods seamlessly with a modern twist. The way she characterized the Norse Gods and explained their existence, and their place in our mortal world, was very well done. Their characters take what we know of the gods, Odin the All Father and Loki the Trickster and the rest of the gang and turn their archetypes on their heads, making them fallible and almost human in their desires and weaknesses. This type of story is a classic in itself, a love story based on past life experience, and Wilkins brings everything we enjoy about the genre and adds her own elements besides. Despite the subject matter, I didn't feel it was cliché.

The narrator was quite enjoyable as well. Not only is her posh british accent melodic, her Norwegian accents aren't bad either. She does a very good job of assigning a different voice to every character, I was impressed by her range.

All in all, well worth the credit.

Wish I could find more stories like this one!

At first, I hated the main character therefore I wasent enjoying this book so much but It really became good. The writer captures the personalities of the old norse gods perfectly and weaves a tale involving their mythology and our world. Edwina Wren reads this with perfect emotion and pace. She has a brilliant norwegian accent. If you like Kim Harrison, Patricia Briggs or even Neil Gaiman or if you enjoy romance novels you'll want to hear this one. I do not like romance novels and I still loved it. Now my only problem is finding another book like this one!

I loved this story

The narrator Edwina Wren was supernatural herself in the reading of this book.I just loved all 477 minutes of this lovely story. If you like romance/fantasy this would be a great audiobook to listen to over and over and over again. I did!!!!

I picked this up on a whim and was so surprised at how great it was. The story and characters are fabulous. The writer has a wonderful, literary turn of phrase and captures the essence of the worlds very well. The narrator is incredibly good and keeps you completely engaged. A must for your library!

I enjoyed reading this book first and listening to it later. Some of the "magic and romance" of this novel is harder to visualize through the reading. I think that is due to the length and slow parts more then the reader through. This book is not for someone looking for a bodice ripper or the perfect ending. I enjoy how it mixes enough of reality to make it believable and that life doesn't always turn out as we want it to be. "Autumn Castle" by the same author is better, but this book was still enjoyable.

This was a very good book. there are a couple times it seems to drag a bit but then it always picks up. The story is good another Modern day person runs into things old and beyond there understanding. If you enjoy that sort of fantacy this really should be read.

Intelligently written, but too glum

At first I was pleasantly surprised by this book, it is very intelligently written and I liked learning about the norse mythology aspect. I was also happy it wasn't a romance novel. It is slow paced and glum, which isn't the problem as there are several book series like that that I enjoy (like game of thrones), unfortunately it just didn't incorporate any humor or enough action to counter the glumness and listening to this book just made me feel very heavy. I thought the narrator was very good.

As an avid romance fan, I loved the premise of this story. However, as an obsessive romantic, I don't suggest listening to this particular audiobook if you want a bubbly, happy ending; even though it is a nice ending.