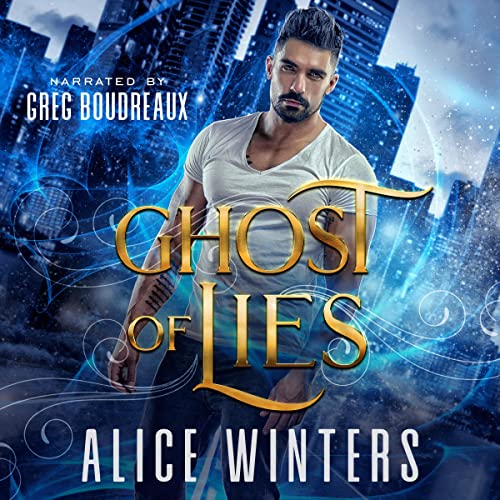 Though I was born with the ability to see the dead, I struggled with it until my brother was killed and his ghost was left behind. Now, I’m determined to figure out who is responsible for his death...the problem is that Detective Maddox Booker, the one working the case, is a grumpy and stubborn man who wants nothing to do with me and definitely doesn’t believe in ghosts. It doesn’t help that I keep finding myself looking ridiculous in front of the detective, thanks to interfering ghosts who enjoy laughing at my expense. Still, the more I’m around Maddox, the more I realize that beneath that surly exterior is a kind and caring man who will do anything to help.

When another man dies, I know we have a serial killer on our hands - the same murderer who has remained elusive for a year and a half. To add to my frustration, I keep running into Hiro at crime scenes, only to hear him claim that he can talk to ghosts. The words of the dead could lead us to the serial killer and even tell us who is next, but ghosts? There’s no such thing as ghosts. Hiro is determined and charming, and no matter what I do, I can’t stop letting him get involved. He's definitely snagged my attention, but when he nearly winds up dead, I know he's getting closer to the truth - and if I don’t do something soon, he might be next.

Ghost of Lies is full of action, mystery, humor, and romance. Though more is planned for this couple, the mystery is solved and there is a happy ending.

📖 Story comment: Good pace, entertaining plot with fun and likeable characters.
Never a dull moment - with mystery, mayhem, and the constant banter between characters both alive and dead - this was a delightfully entertaining story and I hope there are many more additions to this series.

🎧 Narrator comment: Greg Boudreaux has done a masterful performance bringing the characters and story to life. He has good timing, rhythm, inflections and intonations and it's easy to distinguish the characters from each other. A thoroughly enjoyable performance from a narrator at the top of his game.

Alice Winters is quickly becoming one of my fav MM writers, she makes a point of making the male characters actually seem like they really ARE men, I also appreciate the roles she has the main characters play”in the intimate” area, like 99% of MM authors will either A: make the main characters flip flop from total bttm throughout the entire book, than turn into a top, news flash! Even though gay men will say their vers, they are honestly 100% bttms, especially if they’ve got a big strong hot guy who’s a top, tops are tops cause they don’t like to bttm, it’s not something that means the mm couple are truly in love, when the bttm turns into a top, it’s just awkward and WIERD for a real gay guy to read…who I’m guessing is the target audience of MM romance!! AND B: even though the main is a bttm, she doesn’t write them like they are just women which is also virtually done 99% of the time when women write MM novels, let me tell ya from an actual bttm we’re just as butch as the top, don’t write us as helpless women with penis’s….it’s rare to find a female author who actually writes the males in MM novels as actual males, so BRAVO to Alice Winters, keep writing the great stories you’ve put out, and I’ll remain a devoted fan!! ;-)

LOVED IT So Much

What a great listen this story was, I enjoyed it from the first chapter till very end. I am usually not a big fan of ghost stories, but a huge Alice Winters fan so I gave it a try and so glad I did. Ghost of Lies was captivating and full of surprises, twists and unexpected turns, interesting characters and heart-breaking mystery. Narrator made this book even better with his amazing voice and storytelling ability. This was a perfect listening experience.

Certainly a bitter sweet ending, I cried, but in a good way. Has unexpected twists and turns but everything you expect from an Alice Winters book. Amazing!!!

not sure why I finished it. gay romance isn't my thing and the constant talk about sex wnt too far .the actual storyline was mostly buried under the snarky sex talk. I won't get the next book.

The story line was great! The narrator was awesome. Character development and personality was portrayed superbly.
However, the ghost bird… What happened to him? Does he stay with Hiro? Also, something I found confusing… the killer. The group of people he wanted dead were older than he was. The Nicholas, Steven, killer triangle didn’t make sense. Was Millie a teen or was she Nicholas and Steven’s age. Millie’s mother was another twist that we didn’t hear any more about. That was was good but could have been left out as it had no real bearing. I’d like to know if Reggie and Natalie make an appearance in other novels.

This should be a movie.
I really enjoyed the characters and the plot.
great twists.

Love me some Reggie!!

I love all of Alice’s books. Not only does she tell a great story but she writes even better characters and not just main but supporting characters too. That being said Reggie is a blast and can’t wait to see and hear what he does next.

This book hit everything! Suspense:yup, snark:yup, romance: yup, drama:yeah, steamy: yes again!
I know i will be listening to the next book as well!
Trust me this book is wonderful, you won’t regret getting it at all!!!

It was a great listen! I couldn't put it down, I had to know what happened next. I can't wait for the second book!!

One of the best books by the author

I love all this authors books but this one is the cherry on top of all of it. It was intense at times, good balanced sense of humour, good pacing. The narrator did fantastic job, especially during the creepy scenes! Will go to my "reread hundred times more " list ❤

This audiobook was boring for exactly 0 seconds. It's absolutely amazing how well the author managed that. All the characters stayed in character in all situations and the plot was well woven into the events. I felt like it has the exact right balance of romance and suspense and action; well, maybe a little lull with less action would have been nice since this has kept me up far too long because I couldn't stop listening. The relationship develops believably and I love how well the different characters are interwoven into the storyline. I love the concept of ghosts and being able to communicate with them, so this was right up my alley. Amazingly well done.
I also really liked the narrator. I think he did a very good job portraying the emotions and the rising tension in the story while still keeping all the character voices on point. I enjoyed listening A LOT and am now off looking for more.