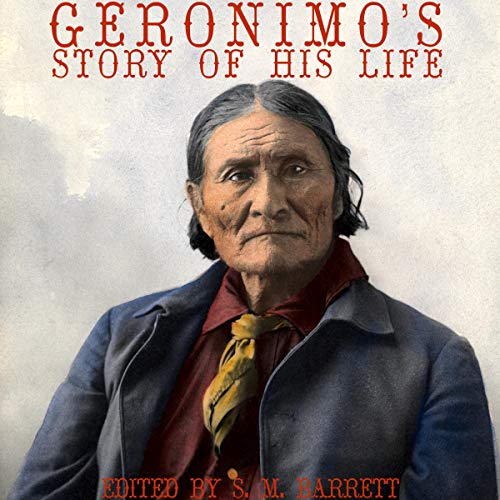 Geronimo's Story of His Life

The editor, Oklahoma school superintendent Stephen Melvil Barrett, first met Geronimo in the summer of 1904, and felt that the 76 year old Bedonkohe Apache leader and medicine man from New Mexico and Arizona, a prisoner of war for 20 years far from his home, who had never told his side of history before, should finally do so. President Theodore Roosevelt granted Barrett's request to interview Geronimo, and this is the result, without Barrett's clarifications or intrusions - "write what I have spoken," as Geronimo said. Topics covered include his early life, the origin of the Apaches, their tribal structure, raids in Mexico, and interactions with the American military.

I loved that Geronimo was able to tell his Story in his own words. I have always loved NativeAmerican History since I was a child.

As a kid, we used to scream, "Geronimo!" before jumping off a high jump into a cold lake, so when I saw this title, I jumped at the opportunity to hear about his life. It's rare (for me, at least) to get to hear American history from the point of view of the vanquished, and in his own words, at that. Anyone interested in American history, or Native American history should listen. There's nothing explosive, or unknown, but it's the life story of a Native American whose name we all know, and now I know a little more about the man.

I’m biased because my father was a great admirer of Geronimo so I grew up hearing and loving his tales. I enjoyed hearing his story in his own words. He was a great man who had a hard life, as did most during his era. I wish I could have met him.