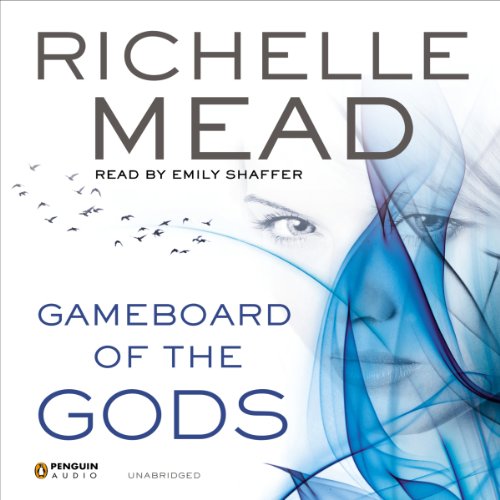 Gameboard of the Gods

Gameboard of the Gods

Richelle Mead, the #1 New York Times, USA Today, and Wall Street Journal bestselling author of the Vampire Academy and Bloodlines YA series - whose books have sold more than one million copies in hardcover - debuts on the Dutton list with Gameboard of the Gods, the first novel in her Age of X series.

In a futuristic world nearly destroyed by religious extremists, Justin March lives in exile after failing in his job as an investigator of religious groups and supernatural claims. But Justin is given a second chance when Mae Koskinen comes to bring him back to the Republic of United North America (RUNA). Raised in an aristocratic caste, Mae is now a member of the military's most elite and terrifying tier, a soldier with enhanced reflexes and skills.

When Justin and Mae are assigned to work together to solve a string of ritualistic murders, they soon realize that their discoveries have exposed them to terrible danger. As their investigation races forward, unknown enemies and powers greater than they can imagine are gathering in the shadows, ready to reclaim the world in which humans are merely game pieces on their board.

Gameboard of the Gods will have all the elements that have made her YA Vampire Academy and Bloodlines series such mega successes: sexy, irresistible characters; romantic and mythological intrigue; and relentless action and suspense.

Audio Rating: 4.50 (Not part of the overall rating)

NOTE: I feel the need to state this up front: When I tried Gameboard of the Gods by Richelle Mead a year ago it was a DNF for me. I am fairly certain it was a combo of mood and this is a little outside my reading zone (fantasy is always hit/miss). A friend suggested I try it on audio and that made a world of difference to me. I was drawn into the story and didn't get to bogged down in the areas that tripped me up before.

First Thought when Finished:Gameboard of Gods by Richelle Mead was a fascinating mixture of fantasy, mythology, and kick ass UF.

Story Thoughts: If you like stories based on mythology (not just Greek but at this point Norse too--going to guess more later) then I think you will enjoy Gameboard of the Gods. There are a few pacing issues for the first half and I think the world building could have been a little stronger BUT the story is there. The unique twist that Richelle Mead gave this genre makes me excited to listen to the next book: The Immortal Crown. The story had a strong second half that picked up the pace, broadened the mystery (which I thought was well done), and gave the characters more depth. It was definitely worth a read!

Character Thoughts: Richelle has always had the unique ability to take a character which you normally wouldn't root for (Rose in VA, Adrian in Bloodlines, Roman from the Succubus series, and Eugenie from Dark Swan) and making them work. Same works here with Justin. Seriously on paper there is not much that makes him the kind of guy you root for: serious player, has a bit of a drinking problem, thinks he is always right, and can cut to the quick with his tongue. Yet, you find yourself rooting for him anyway. Mae is pretty kick ass and I think we have just reached the tip of the iceberg of who she is. She is a lot like Rose and Eugenie in that she is far from perfect, a bit edgy, and does things that are a bit outside the box. These two characters with all their imperfections work really well together!


Emily knocked it out of the mother-freaking park! I am not sure I could have made it through the beginning half of the book without her brilliant narration. Her pacing was good, nuances good, and I even liked her voice for Justin! I will be continuing this series in Audio.

Final Thoughts: I am glad I decided to give Gameboard of the Gods another whirl!

Not bad, but I'm accustomed to Narrator Emily Shaffer's voice performing as teenage characters where as in this book the characters are in their mid to late twenties. The character of Mae (in my opinion) should sound a bit older and more mature.

While the story started off a bit slow, it grew in intensity and character development. The narrator was excellent. I'm looking forward to the next in this series!

My daughter is the one who started with the series. Rachel Mead is an excellent author. She definitely has me hooked to all of her series. All of her books are very well written with an excellent storyline and keeps you waiting for the next.
Emily Schaeffer the narrator brings the books to life. She is one of the best narrators I have heard!

I really hope that you can keep Emily as your narrator in all of your series she is truly excellent!!!

Tried really hard to love it...

What was most disappointing about Richelle Mead’s story?

The story was very confusing. I usually love Richelle Mead's books and I am used to her "info dumping" so to speak, but I feel like she just throws you into this new world and I didn't feel I got any sufficient answers til midway through the book. Also I felt no strong emotional connection to any of the characters, which was disappointing, because it is that aspect that draws me most to her books.

Emily Shaffer is what I disliked most about reading this book. Now, she's not terrible, but she also narrated part of the Vampire Academy series and all of the Bloodlines series. Now this. It's too much. It was fine previously when she was working with a spin-off, but reading this, all I could think about was- oh that's the voice of so and so, oh wait, no this is a new series. But considering this is a more mature novel, I was hoping for more mature narration. Sad face.

A little more organization in the revelations and instruction in this interesting new world. It was a fascinating listen. But there were times when I was confused and had to go back and relisten to sections.

If you’ve listened to books by Richelle Mead before, how does this one compare?

The characters were not distinct. And there wasn't enough emotion to her performance. Her tone was flat and she sounded immature and young no matter who she was voicing.

Could you see Gameboard of the Gods being made into a movie or a TV series? Who should the stars be?

At this point in the book I don't think I'm connected enough to the characters to get overly thoughtful about either option. But I hope there are more books. Because the concept is good and I hope it gets better. The end of the this book made me hopeful.

I tried this new series because I loved the VA/Bloodlines books, but I felt like I was dropped into a world that wasn't explained or defined by the author. Also, Emily Shaffer is a fantastic reader, but these new characters very clearly have the voices that she used for VA/Bloodlines. I lost the thread of the story because I kept hearing Eddie, Rose, & Dimitri. I feel like this book needs a different narrator to even give it a chance.

Has Gameboard of the Gods turned you off from other books in this genre?

No. I think the main problem is that Mead fails to describe her new world before face-planting the Reader into the plot.

Would you be willing to try another one of Emily Shaffer’s performances?

Only if she can learn some new voices. The VA/Bloodlines characters are very distinctive, and should not be re-used in new books by the same author. It makes things confusing.

If you could play editor, what scene or scenes would you have cut from Gameboard of the Gods?

To be honest... I quit. I have no idea what was going on, so I quit. If I were editor, I'd tell Mead to go back to the beginning and tell me wtf RUNA is.

I enjoyed this book. The world is well thought out and the different countries are very distinct. The whole society of the RUNA was very interesting with the patrician classes and the plebian classes and the cultural differences between the two as well as the genetic. The whole murder storyline was well thought out and executed. It was closed out at the end of the book but left enough open for following books. The evolution of the belief in Gods that came to both Mae and Justin seemed pretty organic and possible. I can't wait to see what the next books do with the interactions between Justin and Mae. The whole neurotransmitter implant that the praetorians have is an interesting concept and I wonder what else they can do. Emily Shaffer did a good job with the narration and differentiating between the characters but sometimes I had flashbacks to the Bloodlines series by Richelle Mead which she also narrates.

Richelle Mead has done it again but in a less teenangsty way. It took a little bit to get into the flow with this book, but stick with it. It's a great read and can't wait for more.

Absolutely. I love Richelle's imagination; I've read every series she's written except the Georgia books, and I guess it's just a matter of time before I break down and get those too. Her writing style is familiar and comforting as well. I've come across few writers who manage a good balance between writing well and sounding natural.

Once again, I'd have to say the creativity that went into laying out this brave new world. I love history, and the idea of a new, more 'enlightened' world clashing with Gods older than humanity itself is brilliant in my mind.

My one regret for this book is the narrator choice. I enjoy listening to Emily Shaffer, but I can't help but compare the characters in this book to those in VA and Bloodlines when listening to her. Honestly, I wasn't thrilled when I found out the VA narrator was doing Bloodlines, but Sydney is still young enough for Emily's voice to match, and VA went through so many that she can't really be counted as 'the voice of VA'. She's a great narrator, but I feel that her voice is too young for the characters she portrays in Gameboard of the Gods.

As expected, Richelle Mead does it again! A richly detailed world and convincing characters are definitely worth the reading time and after having already read the book I now listen to the audio version during car rides etc.