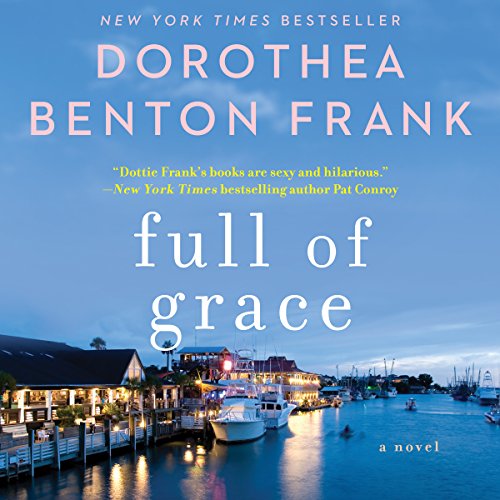 The rich atmosphere of South Carolina, Hilton Head, and Charleston is brought vividly to life by Dorothea Benton Frank, a South Carolina native who, with her exquisitely evocative prose, makes you smell the sea air, see the palmettos, and savor the sweet tea, but this time it comes with a side of antipasti.

Hilton Head, a South Carolina retirement heaven - at least it's supposed to be, but for Big Al and Connie Russo, the move from New Jersey to this Southern paradise has been fraught with just a few complications. Especially for their daughter, Grace.

Well, that's what she likes to be called. Her family insists on Maria Graziella. Seriously, enough with the Neapolitan. That might have been okay in New Jersey, but now it's just plain silly, and Grace, at 32, is - horror of horrors - still unmarried. No wonder her family drives her crazy. Well, that and the fact that she's living with the man she would marry if they both weren't so commitment phobic. Michael is a doctor and a scientist, and Grace is pretty sure he's also an atheist. Over the years Grace has become a bit ambivalent about her faith, but her family is as old-fashioned Italian as they come. So the stage is set for a major showdown that just might change Grace's outlook on life, family, and the New South.

A little too Religious

Good book but way deep in Catholicism. I was already so far into the book I didn’t want to stop.

First let me say this book is a big departure from the Author's normal style. I love her other books, I understand some people not liking this one because it is different, but I have to say I loved it too. Yes Catholicism is a large part of the book. Let me say that I grew up Lutheran and have always had some difficulty understanding the Catholic faith and the purpose of confession and why they pray to saints. This book did a lot to help me understand that. I do think that the agnostic boyfriend having such a quick turn about in his faith at the end of the book is a little unrealistic. It makes more sense that Grace the main character is able to return to her faith quickly. I loved the priest in the book, he is such a departure from the stereotype, yet he conveys his faith so clearly. I loved the ending, throughout the book the family has had some difficulties in getting along and relating but the whole plot line clearly moves them to the point of remembering what family is all about.

A very interesting and tender story of love and acceptance. I would definitely recommend this book highly. Especially if you need a bit of inspiration

it is not often I laugh and cry while reading books like this. Grace made me do both, plus it made me hungry for good Italian food at the same time! Loved this book!!!

Not my favorite story

This was not my favorite story from Dorothea. Grace Russo. Was a pain in the ass. This story needs no sequel.

A key issue of our time is handled very well. This book was serious, realistic, funny and entertaining. I listen to books to "checkout" of my daily grind. I need the entertainment...the distraction. Thank you Ms. Frank - This is definitely a keeper. In fact, based on the audiobook, I need to go buy the book. As someone who grew up Catholic, but have had my doubts, you really gave me something to ponder.

This book may inspire you question your lifestyle and rethink your priorities. Frank is an inspirational writer.

Loved every second- the NJ Italian accents, the low country, the faithfulness, the family...loved it all!

Review of Full of Grace

This was a good story overall. Got a bit long toward the end. The narrator did a good job.

Brain tumor story not my favorite

As someone who lost a 55 year old brother to a malignant brain tumor and a 40 year old cousin to a non malignant brain tumor I wish I had known that would be the subject of the book. Very unrealistic about the subject. Cognitive problems are more common than headaches. That being said, I enjoyed the spiritual discussions much more than the coverage of the brain cancer issue.