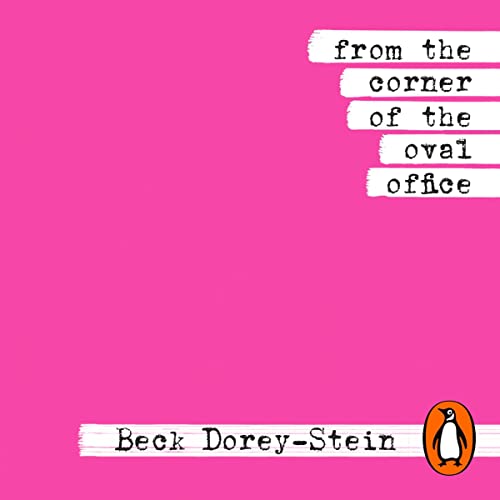 From the Corner of the Oval Office

Random House presents the audiobook edition of From the Corner of the Oval Office, written and read by Beck Dorey-Stein.

The compulsively listenable, behind-the-scenes memoir that takes listeners inside the Obama White House, through the eyes of a young staffer learning the ropes, falling in love and finding her place in the world.

In 2012, Beck Dorey-Stein was just scraping by in Washington, DC, when a posting on Craigslist landed her, improbably, in the Oval Office as one of Barack Obama's stenographers. She joined the elite team who accompanied the president wherever he went, recorder and mic in hand. On whirlwind trips across time zones, Beck forged friendships with a tight group of fellow travellers - young men and women who, like her, left their real lives behind to hop aboard Air Force One in service of the president. But as she learned the ropes of protocol, Beck became romantically entangled with a colleague, and suddenly the political became all too personal.

Set against the backdrop of a White House full of glamour, drama and intrigue, this is the story of a young woman making unlikely friendships, getting her heart broken, learning what truly matters and discovering her voice in the process.

"Who knew the West Wing could be so sexy? Beck’s unparalleled access is obvious on every page, along with her knife-sharp humour... Lots of books claim to give real insider glimpses, but this one actually delivers." (Lauren Weisberger, author of The Devil Wears Prada)

What a life! Best book I"ve read in years! I want more from Beck Dorey-Stein.

the author does an excellent job performing her work. her reading, coupled with a light writing style, is the only thing that makes this book worth finishing.