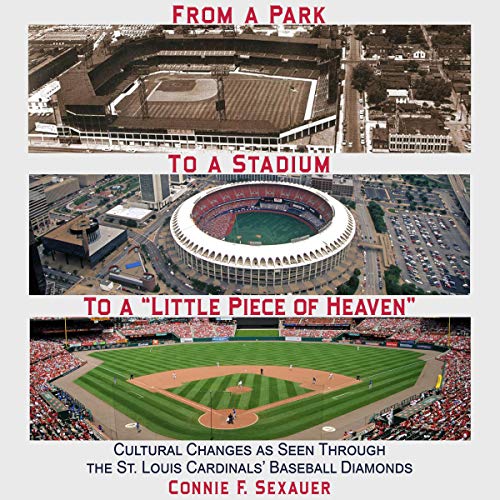 This study, based on newspapers, journals, oral interviews, and academic studies examines 19th- and 20th-century cultural changes through the space and place of American baseball parks to expose how public buildings exemplify American culture. The argument put forth by author Connie F. Sexauer is: Connections can be made by examining these places to reveal economic, political, and social conditions of American society to reveal changes to the culture of the day.

The park is an important source to follow American society in the 20th century. Beyond the architectural structure and the neighborhood setting, how did people use the grounds, and how can we understand society by inspecting this material cultural? How did the parks change the communities and the people who attended the games? How did the people attempt to control the setting?

This audiobook will examine cultural spaces in St. Louis, Missouri, that attracted sports enthusiasts, Sportsman’s Park at Grand and Dodier in use from 1866 to 1966, and Civic Center Busch Memorial Stadium at Seventh and Spruce, which opened in 1966 and closed in 2005, as well as the new stadium, Busch III, which opened in spring 2006.

Sexauer contends that the development of the ballpark design, the space and place of the ballpark, parallels the general cultural development of American urban design and reflects the technological and cultural changes in 20th-century America and into the 21st century. Specifically baseball went from a poor man’s exercise of fun to a multibillion-dollar industry in the course of a century with the unsuspecting American citizens feeding the pockets of the rich owners.

This audiobook will more clearly illuminate the importance of professional baseball in the cultural advance of American society.

About the author, Connie F. Sexauer: Dr. Sexauer has taught at the University of Wisconsin-Marathon County for the past 15 years. She teaches US history and gender studies. She is a graduate of the University of Cincinnati with a specialty in urban history. She was born and raised in St. Louis, MO, and the subject of the St. Louis Cardinals has been a passion of hers for more than 50 years. The subject of her latest book, From a Park to a Stadium to a "Little Piece of Heaven", brings together her love of history, cultural studies, social change, and changes in sports. She has had articles published and delivered national papers on this subject of America’s favorite pastime.