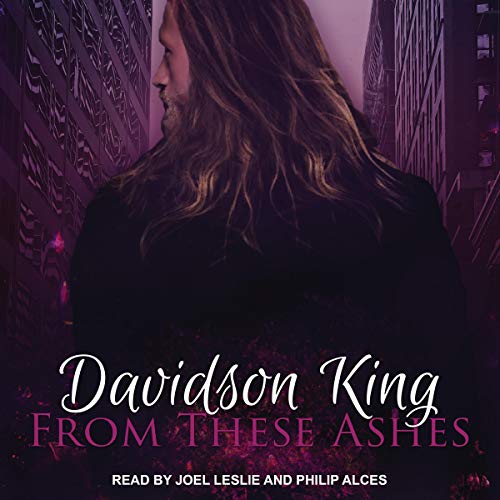 A product of his past, Black spends half his time saving lives and the other half taking them. Every day, a hard choice must be made and he's the man to make it. Long ago, he vowed to never love again; one-night stands with a willing body was all he ever needed. But along came Quill, and Black's life is irrevocably changed. He never expects something as simple as Quill's persistence to alter the way he not only sees the world, but how he lives it.

Quill has bad taste in men and equally horrible luck. Growing up wasn't easy, surviving is even harder. When his past and present collide, he's convinced he'll finally witness his own destruction. But when an unlikely antihero steps in to protect him, his life is turned on its head. He's spent months flirting with the man of his dreams and hoping he'd take notice. But it turns out, being on Black's radar isn't all it's cracked up to be, and his idea of protection varies greatly from Quill's.

Unknowingly sharing the same goal - burying their own pasts deeper than the fires of hell can reach - they're both unaware that jumping into that fire will do more than ignite their feelings, it could lead to their own demise.

i have been waiting for this book to come out on audible and i listened to the book the first day it was out... could not get enough!

You will be wow'd by this story and the wonderful narration!

Pretty good. Not quite like the other books in the series so was pleasantly surprised by not knowing what to expect.

The narrators we're both great. I wish book 5 was on Audible already. It's not so I have to actually read it. It's already on my Kindle.

This was a very good series. I liked the first book and ended up reading all the books back to back. Every one is well worth a credit.

Audiobook Review December 2019:
I've been listening to this series from the beginning recently but with the holidays fast approaching I have not yet got around to writing my reviews for books 1-3 so don't be surprised if some of what I say in this review shows up in those as well, particularly anything pertaining to the narration.

There is really nothing I can add to my original review from last year in regards to the story and the characters. I still don't want to give anything away, the book might have been around for over a year now but I'm sure there are plenty of readers out there that have not yet visited Haven Hart. Black and Quill still seem like a complete trainwreck waiting to happen on the surface but once you get to know them you realize how perfectly suited they really are.

Now on to the narration. I've never listened to audiobooks with two narrators before so I wasn't sure how I would like it. Well, I love it! Both Joel Leslie and Philip Alces capture their main character(and others) expertly. They are easy to listen to and they both make everything come alive visually. I often say when an audiobook is read wonderfully they remind me of the old radio shows of the 30s & 40s that I collect well not only is From These Ashes read wonderfully but having the dual narration makes it even more reminiscent of those old radio shows. Add in the brilliant storytelling of Davidson King and I swear I'm listening to Suspense and expected at any minute for Harlow Wilcox to break in with the Autolite Spark Plug sponsor ad. Now I realize most people have no idea who Harlow Wilcox was(he's one of the more well known pitchmen of the era) but I included that tidbit in my review to properly express how the dual narration came across as more than just another audiobook reading. Joel Leslie & Philip Alces bring to life Davidson King's incredible words that will entertain for decades to come, I'm sure in 80-90 years people will be collecting audiobooks as I do radio shows and they will be enthralling a whole new generation.

Original Review December 2018:
Black closed his heart off to more than one night stands years ago but a chance meeting could change that. Quill has spent his life surviving but never quite living than a moment of timing changes that. When Black and Quill's worlds collide will they be able to resist the changes they face? Will they even be able to survive before they have the opportunity to rise again?

Davidson King has done it again! I really find myself at a loss as to what to say and not give anything away. Haven Hart Universe just keeps getting more and more interesting. I'm not sure which intrigued me more: Black's gruffness hiding his heart underneath or Quill's fears hiding behind his peppiness. On the surface, not only are these two polar opposites but they really shouldn't even exist in the same universe let alone interact but then you get to meet them and I mean really meet them and you realize they are perfect together. Looks don't determine the man and both Black and Quill have weaknesses and strengths that have made them into who they let the world see which is why they balance each other out, that is if they let the other one in to see the real person and for that you have to read From these Ashes yourself. I'm not even going to attempt to touch on the action/mystery/thriller side of the story because . . . well just . . . WOW! . . . and I'll leave it at that: WOW! and DOUBLE WOW! and a HOLY HANNAH BATMAN! for good measure😉. Oh, and it is set at Christmas so what more can you ask for?

I must be honest, Black and Quill are probably my least favorite of the pairings so far in Haven Hart. Now, having said that, if I was to actually rate the couples the difference between all four would be only about .93. It's kind of like me admitting that The Phantom Menace is my least favorite of the Star Wars films and yet of the 8 main saga films so far, all 8 are in my Top 15 Films of All Time so TPM still ranks pretty darn high and that is exactly what Black, Quill, and their journey in From These Ashes do: rank pretty damn high on my "Fiction Fantastical" list. As the Haven Hart Universe continues to grow and more of the characters are revealed so does the talent of storyteller Davidson King. Since I mentioned it you are probably asking why Black and Quill are #4? I could be superficial and say its Black's hair(I'm not much for long hair in men, just doesn't tick my boxes) but I'm not that superficial. Truthfully it really comes down to just the timing. Had they been the center of book 1 then they would most likely be my favorite. It happens almost 99% of the time when a series focuses on different pairings in each installment, the first is always my favorite.

One of the things I love most about the Haven Hart Universe is, yes these situations and people are not the kind of thing every town or city faces but at the same time the characters are so genuine and real you actually feel like you could meet them pumping gas, dropping off Christmas packages at the post office, or waiting in line to get your morning hot chocolate(sorry I'm just not a coffee person😉). So no matter who is your favorite in this series you will never be disappointed, the author's talent for storytelling will never leave you wanting. A true gem and classic in the making.

If you are asking can you start with From these Ashes, I suppose technically you could since each entry features a new couple but I highly recommend starting from the beginning. Characters, situations, plot points can pop up and carry over though Davidson King does a pretty good job of "recapping" so you aren't lost but it just flows better in order. Personally, I can't imagine visiting Haven Hart in any order other than it was published. And yes, I said "visiting" not "reading" because you find yourself getting so sucked in that you reach for a tissue or drink(trust me you will need both for happy and sad times) you expect to find the characters sitting next to you. So sit down, buckle up, and hold on because you are definitely heading for a bumpy but exciting journey.

Brilliant addition to the series

I loved this story. We finally got some background info on Black and how he began his reign of justice/terror in Haven Hart. With Quill being the focus of the book, it was quite a fun ride. It was dangerous and sad, but also hopeful and sweet.

Another perfect addition to this series.

Joel Leslie and Philip Alces both have such distinctive voices and I've loved that this entire series has been the two of them, teamed up. Philip Alces nails the domineering, powerful Black while Joel Leslie gives lightness and humor to Quill. Brilliant performances by both.

From These Ashes(Haven Hart Book 4)by Davidson King. I just loved Black and Quill's characters. This story develops nicely. A good combination of world building and character development. I enjoyed this story. Looking forward to the next book.
The Narrator's Philip Alces and Joel Leslie did a fantastic job bringing these characters and story to life.

as good as the ebook

The story is always 4 or 5 stars, because if I wouldn't like the story as ebook, I wouldn't listen to the audiobook.

The performance from the narrator is also very important for me. I can't listen to a lot, because my English as a non-native-speaker isn't so perfect to follow a whole story over hours, when the narrator speaks too fast or too sloppy. Normally I have to SEE the person, who is talking to me in English. It took me a little bit, to come into the narrator, but at the end, it worked. I only have to take a few breaks between. I'm just not yet finish with the book, but I listen enough to give a review.

It's always a pleasure to listen to the Hart Haven stories. These two narrators rock!

I Just love these books to pieces. Black and Quill have been circling each other for awhile and finally get their hea. I admit I was a little disappointed with the conflict resolution but otherwise fantastic story. Narration by both Joel Leslie and Philip Alces was amazing

I Just Can't Get Enough.

This series is absolutely SUPERB. I just can't get enough of these outstanding stories. I can now say that Davidson King is another one of my favorite authors. She's a beast with her creativity. Usually when I listen to a series, I can pick a favorite, not with this series. All four that I've listened to are extremely good. Joel Leslie & Philip Alces are knocking it out the park with their narrations. Along with the awesome story, they bring each character to life with enjoyable pleasure to listen to. If your looking for a good series to listen to, that gives you everything that a book should. I highly recommend you start with this one.👇Now that book 4 is done, and book 5 is not yet available on adubile I think I might have a withdrawal..Jk..lol😊 I'm keeping my fingers🤞that we do not have a long wait for book 5.😟