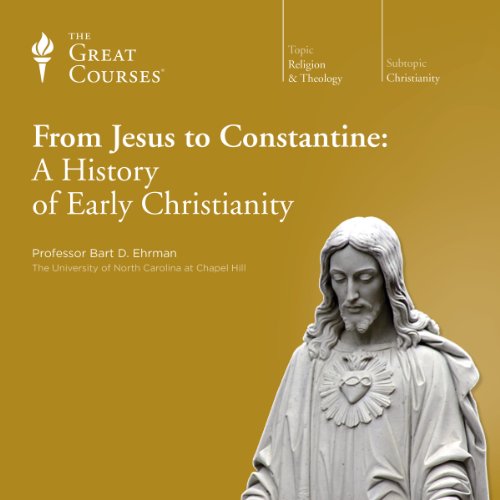 From Jesus to Constantine: A History of Early Christianity

Step back to Christianity's first three centuries to see how it transitioned from the religion of Jesus to a religion about Jesus. How did a single group from among many win the struggle for dominance to establish the beliefs central to the faith, rewrite the history of Christianity's internal conflicts, and produce a canon of sacred texts – the New Testament – that supported its own views?

These 24 lectures provide a fresh and provocative perspective on how a movement of perhaps only 20 lower-class followers of a Jewish apocalyptic preacher crucified as an enemy of the state grew to include nearly four million adherents in only 300 years. Professor Ehrman looks at the faith's beginnings, starting with the historical Jesus, Jewish-Christian relations, the way Paul and other Christians spread the new faith, hostility to the Christian mission, internal struggles within the faith, and the formation of traditional Christianity as we know it today.

Christianity argued its ancient roots by retaining the Jewish scriptures and arguing that it was, in fact, the fulfillment of what those scriptures had promised. Throughout these lectures, Professor Ehrman challenges old misconceptions and offers fresh perspectives on aspects of Christianity and its roots that many of us might have thought we already understood. By offering you a scholar's perspective on the origins of what Professor Ehrman describes as the most important institution in Western civilization, this engaging course will increase your understanding of Christianity today.

As always Ehrman tells a level and factual account of the appearance and development of Christianity. Well researched and fair to believer and skeptic alike. As objective of a history one could hope to find. Engaging presentation and never dry.

An Objective History of Early Christianity

This course is not a devotional course. It is not intended necessarily for Christians, but for those who are interested in the history of Christianity. This is not Christianity from a theological perspective. In other words, this is education. It is not a course on faith.

Professor Ehrman is an erudite scholar on the Bible and the history of Christianity. If you wish to receive an objective education on the subject, this course is appropriate for you.

Exactly what I wanted

An unadulterated history of early Christianity. Prof Ehrman really knows his stuff. Highly recommend if you are looking for truth in the historical sense.

Bart Ehrman is spot on as usual. The advantage of listening to his lectures rather than to someone else narrating his book is hearing the author's own voice. Ehrman is enthusiastic and engaging; he sounds like he's speaking off the cuff rather than reading a script; and he's able to present complex material in a clear and systematic way. It's important to note, however, that this lecture series is a history of early Christian IDEAS rather than early Christian people. There are a number of people discussed, of course - people like Tertullian, Ignatius, and Origen - but the lectures are far more topical than chronological.

Ehrman gives an excellent overview of early Christianity and the many differences that existed in the early Church.

Bart Ehrman Does it Again!

This was impossible to put down. I listened to almost the entire lecture in one sitting. Lots of substance. Of course, what else can you expect from the great Dr. Ehrman?

Dr Bart is a treasure of knowledge. He can deliver details of the chosen historical segment like he was in your living room giving an enthusiastic account of a favorite topic of conversation. I have listened to him before and will again.

Professor Ehrman gets tongue tied pretty frequently in the first couple of lectures, but if you stick with it he gets rolling pretty strongly and you get pretty well used to the cadence of his voice. There’s definitely much to be learned in this course about the first days of Christianity and I really want to take a deeper dive now. It’s hard to cram 300 years of history into a few hours but he did it well.

One of my favorite lecture series

I have enjoyed numerous lecture series through my Audible subscription. This is one of my favorites. It is informative and presents several elusive concepts in an engaging and respectful manner. The lecturer avoids expressions of subjective judgment and does not appear to “choose a side” on a number of controversial issues. I highly recommend this series for anyone who seeks a deeper understanding as to how this religion grew from roughly 100 followers at the time of Christ (by some estimates) to 3-4 million a few centuries later notwithstanding enormous obstacles including persecutions.

Dr. Ehrman is an engaging intellect who states his case clearly and succinctly. I have read his books and have seen him interviewed on occasion. Early Christianity is a subject I am currently interested in and have been for some time. I highly recommend this!