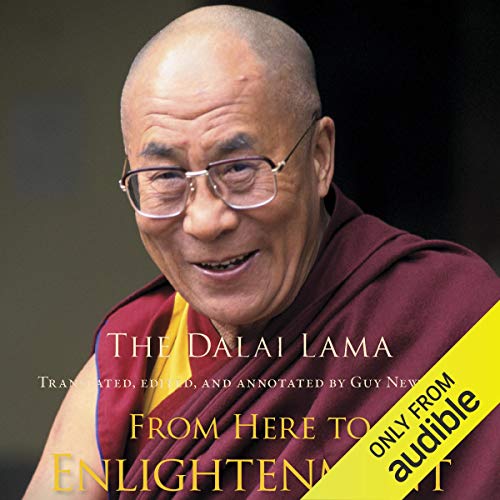 From Here to Enlightenment

From Here to Enlightenment

When the Dalai Lama was forced to go into exile in 1959, he could take only a few items with him. Among these cherished belongings was his copy of Tsong-kha-pa’s classic text The Great Treatise on the Stages of the Path to Enlightenment. This text distills all of the essential points of Tibetan Buddhism, clearly unfolding the entire Buddhist path to enlightenment. In 2008, celebrating the long-awaited completion of the English-language translation of The Great Treatise, the Dalai Lama gave a historic six-day teaching at Lehigh University to explain the meaning of this classic text and to underscore its importance. It is the longest teaching that he has ever given to Westerners on just one text, and Westerners have never before had the opportunity to receive such a complete teaching that encompasses the totality of the Buddhist path from the Dalai Lama. From Here to Enlightenment makes the teachings from this momentous event available for a wider audience.

Something for beginner to advanced

As a beginner to the study of Buddhism a good portion of this book was over my head. However, I was able to learn new concepts from many parts of this book. It was well worth the time and money.
Excellent performance from the narrator.

An intellectual's guide to Buddhism

As a newcomer to interest in Buddhism, I found this to be extremely engaging and intellectually stimulating. Where most conversations about spiritualism stray far from logic and observation of reality, this book shows how Buddhism uses these core tools to elucidate a beautiful description of life and consciousness, down to the very nature of the universe itself. This book is an excellent way to for the jaded intellectual to find new avenues of thought.

If you have the right basis in Lamrim this is not to be missed. It maybe a bit advanced if you are just getting into Buddhism...

Wonderful teaching but not for the beginner. I found the message to be one of great compassion and a goal to reach for.

fortunate to found this book

I feel very fortunate I found this book. Very profound, so this is like the sixth time I hear it and will have to do many times more

I am 53 and found Buddhism at 50. The teaching in this book was perfect for me. I am not a college graduate but still was able to follow the lines of thinking and reasoning with minimal difficulty. I have read several of the Dalai Lama's books and found this to fit in perfectly with my current understanding. His Holiness's teachings are well explained in this text and the order in which the information is given flows well. I found it to be definitively crucial for me. The narrator is well spoken and articulate as you might expect. I found his voice very soothing and easy to enjoy.

Buddhism isn't for everyone but everyone can find something meaningful in this book. Blessed Be.