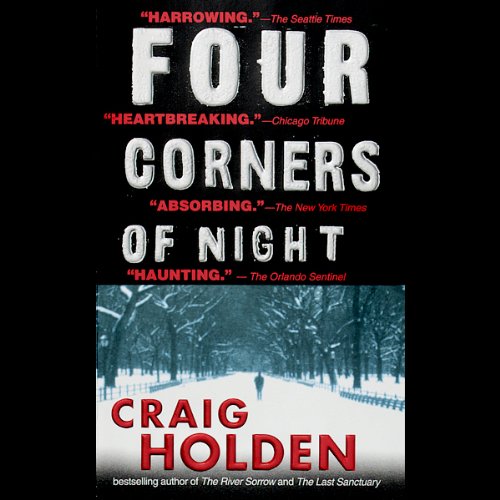 In his critically acclaimed novels The River Sorrow and The Last Sanctuary, Craig Holden forged a powerful, poetic vision of the American heartland. Now the writer The New York Times calls "astonishing" returns to this haunting landscape in his newest work.

At once a suspenseful search for the truth in a teenage girl's abduction and a multilayered rumination on family, love, and friendship, Four Corners of Night explores bold new terrain in literary suspense fiction.

It's 9:00 a.m. in an unnamed Midwestern city. Bank Arbaugh and Mack Steiner have just come off a typical night shift -patrolling the city, scaring off prostitutes, shaking up the usual suspects.

Sitting in Denny's, waiting for bacon and eggs, they get a call over the radio: A teenage girl is missing. With a glance, the two cops - best friends since childhood, as close as brothers - know their lives have shifted off balance, because seven years before, Bank's own daughter went missing and has not been found to this day.

Two parallel stories: two girls from opposite sides of town, seven years separating them. As evidence mounts, one case begins to illuminate the other, until finally, the inevitable conclusion is revealed. Craig Holden takes us on a harrowing journey into the night, and exposes not only the heart of a tattered American city, but also of two men whose lives are intertwined in loss, envy, and love.

Stunning, haunting, and unforgettable, Four Corners of Night is a book that makes us think about friendship, the stuff of heroism, and the meaning of truth. Holden stops at nothing to ask the question: To what lengths will we go to overlook what we don't want to see?