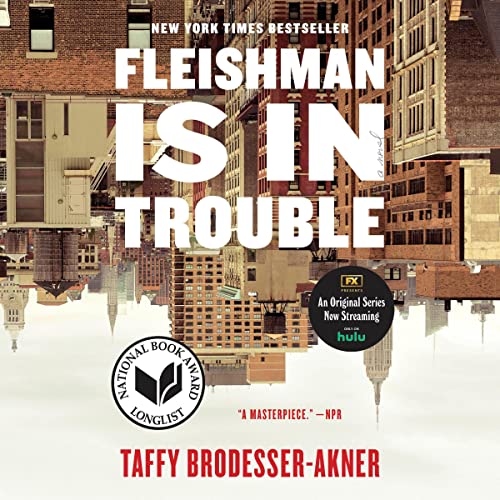 Fleishman Is in Trouble

"A feminist jeremiad nested inside a brilliant comic novel - a book that makes you laugh so hard you don’t notice till later that your eyebrows have been singed off." (Ron Charles, The Washington Post)

A finely observed, timely exploration of marriage, divorce, and the bewildering dynamics of ambition from one of the most exciting writers working today

Toby Fleishman thought he knew what to expect when he and his wife of almost 15 years separated: weekends and every other holiday with the kids, some residual bitterness, the occasional moment of tension in their co-parenting negotiations. He could not have predicted that one day, in the middle of his summer of sexual emancipation, Rachel would just drop their two children off at his place and simply not return. He had been working so hard to find equilibrium in his single life. The winds of his optimism, long dormant, had finally begun to pick up. Now this.

As Toby tries to figure out where Rachel went, all while juggling his patients at the hospital, his never-ending parental duties, and his new app-assisted sexual popularity, his tidy narrative of the spurned husband with the too-ambitious wife is his sole consolation. But if Toby ever wants to truly understand what happened to Rachel and what happened to his marriage, he is going to have to consider that he might not have seen things all that clearly in the first place.

A searing, utterly unvarnished debut, Fleishman Is in Trouble is an insightful, unsettling, often hilarious exploration of a culture trying to navigate the fault lines of an institution that has proven to be worthy of our great wariness and our great hope.

"Blisteringly funny, feverishly smart, heartbreaking, and true, Fleishman Is in Trouble is an essential read for anyone who’s wondered how to navigate loving (and hating) the people we choose." (Cynthia D’Aprix Sweeney, author of The Nest)

"From its opening pages, Fleishman Is in Trouble is shrewdly observed, brimming with wisdom, and utterly of this moment. Not until its explosive final pages are you fully aware of its cunning ferocity. Taffy Brodesser-Akner’s debut is that rare and delicious treat: a page-turner with heft." (Maria Semple)

"This is a listen for anyone who's married, divorced, dating, and/or cares about women. It's an outstanding audiobook delivered by an exceptional narrator, Allyson Ryan.... Ryan's performance is spot-on throughout. She captures the essence of each character and never misses a beat in expressing the author's insights into life as a woman in the 21st century." (AudioFile Magazine)

“This glorious debut has the humor of Maria Semple, the heart of Meg Wolitzer, the lustiness of Philip Roth, and a voice that is pure. It’s wild and wonderful and goes in so many directions, each with profundity - my favorite thing that novels can do. How does one's favorite journalist become one's new favorite novelist? With this book.” (Emma Straub)

“When his ex drops the kids off and doesn’t come back, a father of two revisits the choices that led to this moment. He searches for answers, hilariously and heartbreakingly avoiding the darkest questions. Brodesser-Akner’s debut is a referendum on marriage, friendship, and how we live (and love) right now.” (People)

I started this book optimistic since the excerpt that was featured on The Cut was very interesting. But with each passing section I found the charters less and less likable. Toby reveals himself to but such an asshole that I had to stop the book multiple times. Maybe him being “flawed” was the point of the book, but in other novels when a charter is that unlikable there is usually one trait or relatable thing that keeps you around...not here.

Overall, the book is a contrived narrative on what a middle aged woman thinks people who get divorced feel, while trying to make “deep” charters. I was very disappointed, and feel like I just wasted all the time I invested. Don’t waste your time or money, just think about how people going through a midlife crisis act and mix in a little divorce.

Wow, much darker than expected

I am a Taffy Brodesser-Akner fan and had eager anticipated this book. In the beginning, it exceeded all expectations— it was the type of book I did more housework so I could keep listening to. But then...it went from funny to repetitive to depressing to annoying. Maybe I, a 40-something married woman, am not the intended audience. Or maybe I couldn’t emphasize with the characters because I don’t live in Manhattan and their lives seemed so...self-absorbed. At any rate, in the end it came off as a shallow, whiny, bitter repeat of all the cliches of midlife crises and upper middle class angst.

Unlikable characters, long repetitive sentences, disgusting midlife behaviors. For those reviewers who found this "genious," good for you for finding value that completely eluded me.

6/5 stars. Perhaps the best book I've read so far this year. I'm so glad I disregarded the negative reviews.

If you don't like Roth, Updike, or even Frantzen, you should skip this one.

A woman narrating a poorly written book about a guy and his “boners?” The writing is just awful. What was the publisher thinking? I stopped the book 40 minutes in and returned it to Audible.

This was one of the worst books I ever listened to.
Went nowhere,repetitive, boring .
Story was awful, not a bit funny.
Completely unremarkable, I do not know how it is getting any buzz.
I feel used that I completed it.
Do not wasted your time!!!

Truly such a waste of time. These characters were self-involved, whiny and unsympathetic. The book essentially went nowhere. I kept waiting for something substantive, but there was nothing.

Not uplifting but still complex

Despite this being listed in the comedy section, I did not find myself laughing at this book. For starters the narrator spends most of the book speaking like an angsty, sarcastic teen which took quite a bit to get used to. The writing itself was very repetitive.

Now onto the good stuff:
It takes a long time for this book to reveal what it’s about. It takes an unapologetic look at what it’s like for a women to be successful and how that impacts society and marriages. I think it speaks to some greater truths that take a while to unfold and when they are it’s in a delicate and artful manor.

The most annoying book I have ever listened to!

After listening to the first series of chapters going on about the sexual encounters of the protagonist, read in the dullest voice ever, you want to shoot yourself.
You feel that somewhere there might be a story, but the writer can’t get to it. Where is the humor in describing an army of women whose only need is to be touched by a man who according to his own standards is not worth to be looked at twice.
It is sad and annoying! If anybody manages to get to the point where something of interest happens, let me know. My first 4 hours listening to this book were a complete waste of time!

after all the hype of the book, i thought it would be better. the characters were self-absorbed jerks. sad commentary on married life.

Couldn't make any sense of it

Much like the main characters, I was desperately hoping it would all make sense in the end. Well, it didn't, not to me. I'd be glad if someone could explain to me what I've been listening to these past 14 hours.